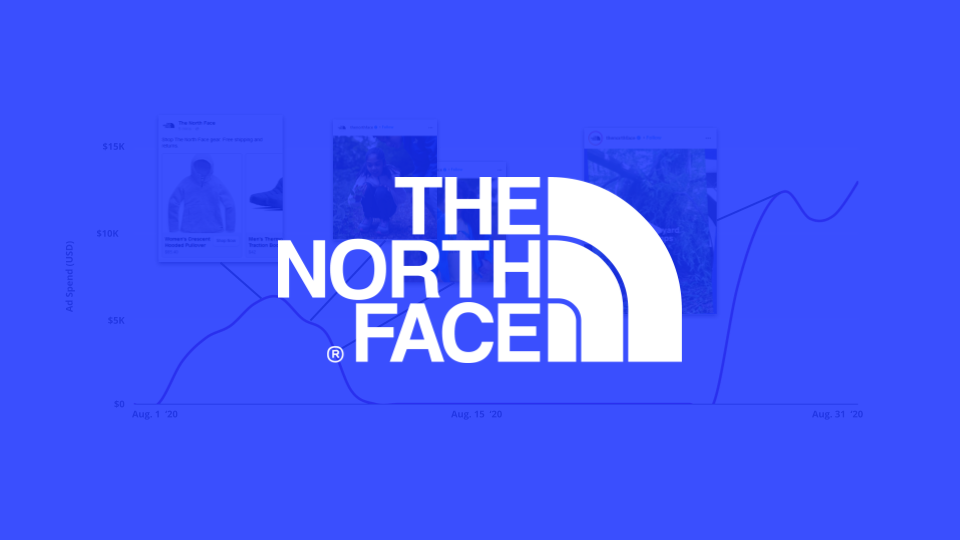 Paid Channel Focus Allocation — Instagram: A relatively small number of major men’s activewear brands have incorporated Instagram advertising into their channel mix in a significant way (see paid channel overview). For example, The North Face’s monthly IG ad spend of $30 - $100K USD is not even 10% of their overall spend. While IG continues to becomes a more competitive and difficult platform on which to build an organic audience, IG advertising remains a relatively non-competitive way to reach a highly relevant audience and drive action.‍

Paid Social Tactic — Balanced Campaign Objectives & Sequential Retargeting: While not the focus of this case study, it’s worth pointing out that the North Face is making good use of a variety of campaign objectives and sequential retargeting with their Instagram campaigns to introduce people to the brand (via brand awareness ads), nurture a relationship with the brand via valuable and entertaining content (the Summer Basecamp virtual event), and eventually drive conversions efficiently with a dynamic retargeting campaign that directly promotes products relevant to users’ browsing behaviour on the North Face eCommerce site.

Cross-Channel Activation Tactic — A Virtual Event Supported With Organic, Paid, and Web: The Summer Basecamp event is an example of high-quality execution of a virtual event that actually drives digital results, something that many brands are struggling to learn how to activate since the onset Covid. Some key success factors are:

Supporting the Contest & Event with Paid: So much effort goes into creating an event and promoting it organically, but promoting it with paid is often left out of cross-channel virtual events.

The North Face significantly increased their Instagram ad spend at the end of the summer from $0 in July to +$98K in August.

The North Face focused their ad spend at the beginning and end of August splitting it between three campaigns: a giveaway, a dynamic retargeting campaign, & children’s clothing ads.

The largest spike in IG ad spend coincided with a giveaway to celebrate the end of summer and their Summer Base Camp campaign.

The giveaway and campaign punctuated the end of North Face’s “Summer Base Camp” initiative where TNF partnered up with their ambassadors to hold free virtual lessons & activities for campers during COVID-19.

The North Face worked with various ambassadors for their Summer Base Camp program, such as Jimmy Chin who hosted a workshop on how to build a pinhole camera, and Coree Woltering who taught Maps 101 & orienteering.

Throughout the campaign, The North Face engaged with their followers by sharing user generated creations on their own channel through compilation videos:

This initiative drove 11K site visits in July when the Summer Base Camp program launched, which is 5X higher than the average page traffic in July.

While website traffic results of Summer Basecamp were strong, the activation only resulted in 15 UGC contest entry posts, which is quite small for The North Face’s audience size. This might be due to the fact that entrants were required to post a photo rather than tag friends in the comments.

Mentioned and earn reach were much stronger than direct content entries for Summer Base Camp.  The #TNFsummerbasecamp hashtag garnered nearly 200 posts with a post from Jimmy Chin generating 63K likes & 288 comments.