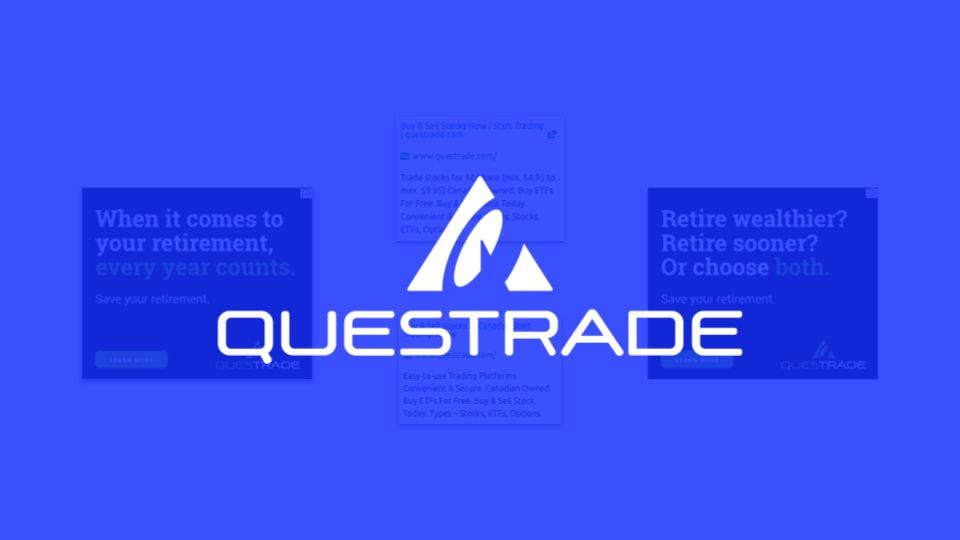 Ad Tactic — Seasonal Campaigns: Questrade ran their “Retirement” campaign in the beginning of the year around January and February - financial advisors often recommend people to retire at the beginning or end of the year to avoid being in a higher income tax bracket.

Competitor keywords often have extremely low click through rates as consumers who are searching for a competitor brand are most likely already a customer of that bank.

Facebook Targeting — Male & Toronto: Questrade focuses the majority of their Facebook ads towards males in top metro regions such as Toronto & Montreal and mainly uses link posts. Consider targeting audiences outside of these parameters to reduce CPM as competition will be lower.

Questrade’s total ad spend has fluctuated over the past 12 months with a peak in February, a low in April, and another smaller spike in August.

During this period, 56% of ads were focused on the subject of retirement—though ads that encouraged customers to bring their investments online received the highest amount of ad spend (despite representing only 9% of ads).

Questrade has shifted their ad strategy from a focus on retirement to a focus on encouraging new customers to sign up for their online services. The best time to retire is often recommended to be at the beginning of the year (to avoid being in a higher tax bracket), which coincides with the timing of Questrade’s retirement campaign.

Over the past 12 months, Questrade has focused the majority of their ad spend on Desktop Display & Paid Search.

Ad spend for Desktop Display has fluctuated the most while Paid Search (+65%) & Facebook (+87%) ad spend have both increased significantly since June.

Desktop Display spend peaked in February before dropping off in March & April. Questrade started to increase spend again in the Spring/Summer months but then decreased spending again in September.

Four ads are responsible for 48% of Desktop Display ad spend in the past 12 months, focusing on the subjects of bringing investments online and low fees.

Other top Desktop Display ads for this period focus on retirement, with the copy invoking a sense of urgency that “every year counts” or suggesting that Questrade can help customer retire wealthier and sooner.

The top Desktop Display sites for Questrade cover a range of subjects such as finance, news, social media, and weather.

Questrade has steadily increased their Paid Search spend at an average of +8% MoM. Paid Search surpassed Desktop Display as the largest ad channel in September.

The top Paid Search ads focus on finance terms and questions such as “tfsa” or “how to buy stock,” as well as competitors such as Wealthsimple.

Ad spend for Mobile Display peaked in December of 2019 and has been on a decline ever since—averaging $15K a month from May to September.

The top Mobile Display ads focused on the subjects of retirement and “bring your investments online” and were mainly placed on theguardian.com, theglobeandmail.com, and forbes.com.

Questrade’s Facebook ad spend peaked in November of 2019 and then began to decrease—bottoming out in April. Questrade has since increased their ad spend from $25 in June to $34K in September.

Questrade focuses the majority of their Facebook ads towards males in top metro regions such as Toronto & Montreal and mainly uses link posts.

Questrade’s top Facebook ads for the period focused on Questrade being the “best online broker in Canada” as well as saving for retirement by switching to Questrade for free.

Questrade has not focused on Desktop Video (YouTube) over the past 12 months, with a small spike from January to February for a video focused on saving more money for retirement with Questrade.