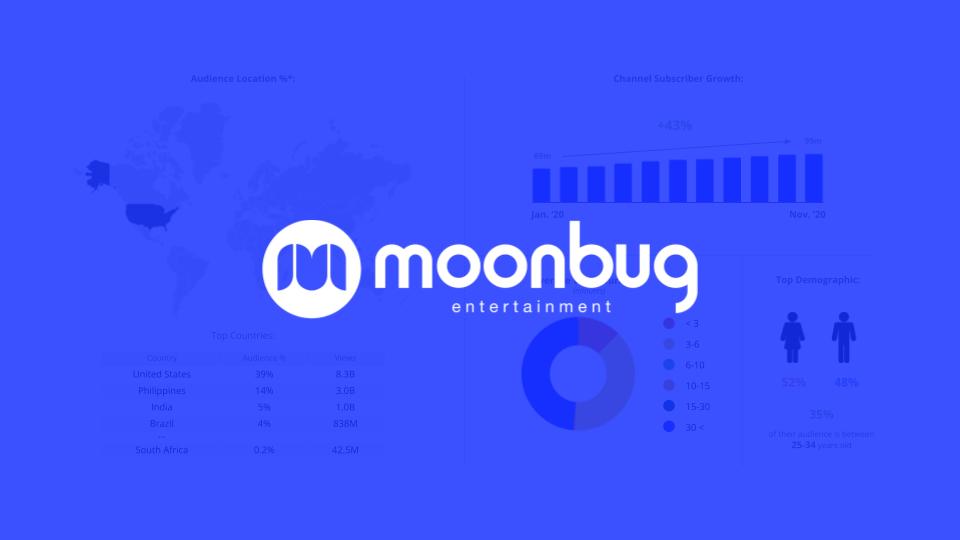 YouTube Focus  — United States & Brazil: The US (24%) leads the chart when it comes to the number of YouTube kids content viewer distribution, followed by Brazil (12%) and Russia (6%). 50% of the Top 10 countries are in Europe, highlighting an area of opportunity. African countries make up less than 0.5% of views for the Top 10 Kids Content channels on YouTube.

Social Media Focus — YouTube is a Key Platform for Kids Content: Video views on YouTube for kids content has grown significantly over the past two years with no signs of slowing down. In 2020 alone, video views for kids content increased by 463 billion views over the previous year. Even with emerging, new channels, they have been able to grow their total video views this year into the hundreds of millions.

Content & Messaging — Longer Length Videos Receive More Views on Average: For the top kids content channels we analyzed, over 60% of their videos are under 6 minutes long. However, data shows that videos that are longer than 6 min (up to 30+ mins) receive more views on average. Not only do longer videos help boost the time viewed.watch time metric on your channel, it also represents a whitespace (opportunity) to capture this market and occupy a space that few content creators are in.

Content & Messaging — Create Videos that Feature Children Toys and Games: A Pew Research Center report shows that channels that produced videos about toys and games, especially those targeting children, had more subscribers than the average channel (by more than 1 million subscribers on average).
Content & Messaging — Educate Children on Racism through Animation: Currently, top kids content creators are not creating video content around racism - however, several channels do include diverse characters in their animation, such as PinkFong!. Most of the kids content around racism come from big networks such as Barbie, Cartoon Network, and PBS Kids, leaving an opportunity for a creator to make specific educational content that teaches kids about acceptance, diversity, and racism that isn’t available on other channels.

Video views for kids content on YouTube has increased significantly over the past two years, with the largest growth happening between 2018 and 2019.

Currently, CoComelon has the highest number of subscribers on YouTube, followed by Kids Diana Show and Like Nastya.

Of the Top 10, only 3 channels are not animation based.

The average video view is 1.4B across these top channels, with several channels overperforming that benchmark.

Aside from growth in video views, the total number of subscribers for these channels has grown +47% since January 2020.

The U.S. leads the charts when it comes to the number of YouTube kids content viewer distribution. 50% of the Top 10 countries are in Europe (Russia, Turkey, UK, Italy & Poland).

While the majority of videos created (60%+) are under the 6 minute mark, videos that are longer than 6 minutes see higher viewers on average.

Breakdown of Vlad and Niki’s channel:

Breakdown of Masha and the Bear’s channel:

According to Pew Research Center, videos intended for children averaged 153K views per video compared to 99K views across the platform-wide in 2019. These channels also:

The report also shows that channels that produced videos about toys and games, especially those targeting children, had more subscribers than the average channel.

The study also claims that videos featuring a child under the age of 13 were substantially more popular (in views) compared to other types of content.

Majority of kids content videos that touch on race or current events generally come from large, corporate platforms, such as Barbie or Cartoon Network.

In a statement from Mattel, the company said, “Barbie is using her platform to raise awareness around racism and encourage girls to stand up if they see a person being treated unfairly … the goal of the episode is to help girls to understand that there is a huge movement going on in the fight against racism, why people are marching together and the importance of reading and learning more about Black history.”

In June 2020, Netflix released an episode of StoryBots that focused on the question “Why Do People Look Different?”

While Netflix usually only releases clips of their StoryBot episodes on their Netflix Jr. YouTube channel, they uploaded the full video of this particular episode. Although the episode doesn’t strictly touch on racism, it aims to explain why people look different and that these differences make the “world a more fun kinda place”