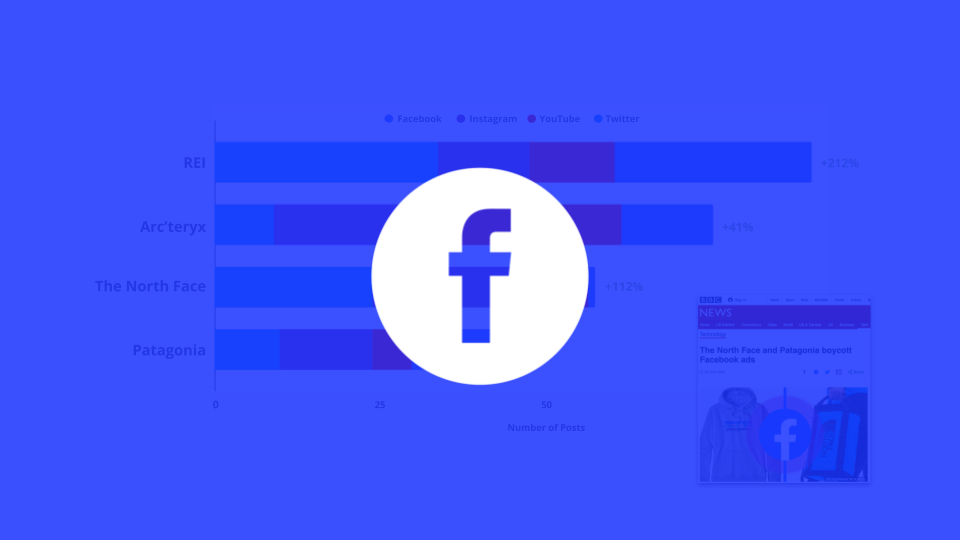 The Impact of the Facebook Ad Boycott on Activewear Brands

The outdoor-related companies currently participating in the boycott are mostly brands, while the majority of those not participating are mainly retailers.

The majority of outdoor brands have shifted ad spend away from Facebook and towards Paid Search & Desktop Video (i.e. YouTube): The collective ad spend of all competitors increased by 63% MoM after months of slow decline due to a +247% increase in Desktop Video ad spend in July.

Continue monitoring which competitors are participating in the Facebook boycott throughout August: In August, overall Facebook budgets for all collective sporting goods competitors may continue to decrease or stay at zero. This may present an opportunity as the space is less crowded. However, their is a risk to brand perception as the boycott increases momentum. Keep in mind that competition on YouTube has heightened due to major shifts in budget.

Consider increasing post cadence to match competitors: There is increased competition in the organic social space as competitors are publishing more content on every platform. Content must be more engaging than ever as the space becomes more crowded.

The outdoor-related companies currently participating in the boycott are mostly brands, while the majority of those not participating are mainly retailers.

Facebook accounted for an average of 44% of the combined ad spend for the outdoor apparel industry from January to June. Facebook ad spend started to decrease in June and was accelerated by the boycott in July. Paid Search replaced replaced Facebook in July as the largest ad format with 40% of the ad share, while Desktop Video grew significantly to represent 29%, and Facebook was down to 24%.

Overall ad spend decreased by an average of -15% MoM from February to June. Though, in July ad spend increased by +63% MoM, which was due to a +247% MoM increase in Desktop Video spend.

Looking at brands who participated in the boycott, Patagonia did not have a significant reduction in Facebook ad spend in July as they had already completely stopped in June. Instead, Patagonia switched their focus to Desktop Display ads & Paid Search in July, with ad spend increasing by +147% MoM & +30% MoM respectively.

The North Face had already been gradually decreasing their amount of Facebook ad spend since January and fully stopped spending in July. Though, The North Face did continue to advertise on Instagram, which was a part of the boycott as it is owned by Facebook. The North Face allocated more spend in July to Paid Search (+124K) & Desktop Display (+36K).

Similar to The North Face, REI had already been steadily decreasing their Facebook ad spend since January—fully stopping both Facebook & Instagram spend in July. Unlike other competitors though, REI did not shift their ad dollars to another channel and barely ran any ads.

Arc’teryx had a large spike in Facebook ad spend in March and has since been decreasing their spend with a complete stop in July. Arc’teryx shifted their ad focus to Desktop Video (YouTube), increasing from $0 in June to $26K in July. At the same time, Paid Search spend decreased by -44% MoM.

Overall, Patagonia, REI, Arc’teryx, & The North Face have been decreasing their ad spend by an average of -22% MoM since a high in February. The spend in July is only 27% of that spent in February.

This overall decrease is closely correlated with the gradual decline in Facebook spend, as Facebook was the top ad site each month. In July, the top sites focused on other social media platforms such as Twitter & YouTube, as well as real estate and outdoor-focused websites.

Brands are shifting their focus from paid social to organic - all competitors increased the amount of organic social posts in July compared to June. Patagonia increased their post cadence the most with MoM growth of +525%.

This increase in posts also corresponds with an increase in video views, which grew on average by +118% MoM for competitors. The North Face saw the largest increase at +294% MoM. YouTube accounted for 80% of the July video views.