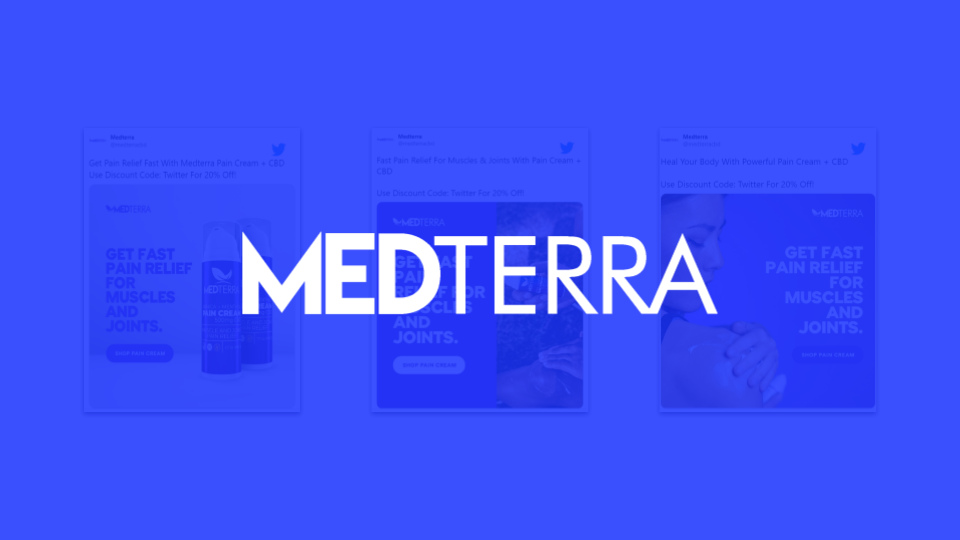 Paid Channel Focus Allocation — Twitter: Twitter is one of the only social media platforms that allows advertisements for approved CBD topical products. In September, Medterra tested Twitter ads with a small spend of $1.8K. This campaign generated 400K impressions and was focused on spreading awareness around their pain relief cream. Ad spend on Twitter accounted for 1% of total competitor ad spend in September and Twitter accounted for an average of 4% of competitors’ total social following in September. As such, Twitter may present a potential whitespace opportunity to spread brand awareness as it is currently being neglected by competitors.

Social Tactic — Focus on What Works Best on Twitter: Brands like McDonalds have been able to gain large amounts of organic engagement on Twitter through the use of text based tweets. These tweets do not include photos/videos or focus on ad content. Rather, these tweets focus on more of a “status update” strategy where McDonalds imbues their post with humor while simultaneously showcasing and bolstering their brand personality. These tweets connect with McDonalds’ audience through shared struggles such as their tweet which pokes fun at people ordering at McDonalds (“can I get a uhhhhhhh…).

Due to the consistent virality of their tweets, McDonalds has attracted other brands (e.g., Fall Guys, Facebook, & Sprite) who comment on the tweets hoping to piggyback on McDonalds viral nature, which in turn furthers McDonalds organic reach. Consider how you can showcase your brand’s personality on Twitter through text-based tweets that connect with your audience and are not blatant advertisements.

Twitter is one of the only social media platforms that allows advertisements for approved CBD topical products.

In September, Medterra launched Twitter ads for the first time. The spend was extremely low indicating they may be doing a test trial and may increase budget in the future. The campaign generated 400K impressions from a total spend of $1.8K.

The top twitter creatives focused on a discount code for 20% off.

The ads directed users to the Medterra CBD topicals page which contains information on the advantages of CBD with a focus on their pain cream.

Twitter may be a whitespace opportunity as most CBD brands’ Twitter followings are quite small—with Twitter making up an average of 4% of competitors’ total social following & 1% of competitors September ad spend.

Looking outside CBD, brands like McDonald’s have seen great success on Twitter through organic social rather than relying solely on advertising.

McDonald’s tweets have gone viral so many times that they have attracted other brands to come on their page and comment (e.g.., Fall Guys, Facebook, Sprite) which further increases McDonald’s reach and visibility.

McDonalds spent $637K on the below Twitter ad but it only generated 5K engagements, while organic tweet posts generated 18x more engagements on average.