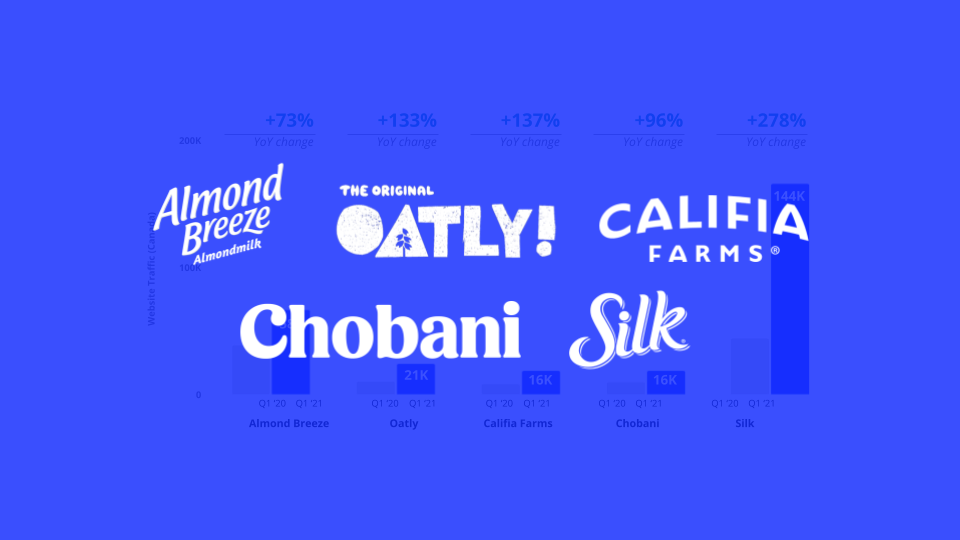 Three trends observed in the first quarter of 2021 amongst all five non-dairy brands in the competitive set (Almond Breeze, Oatly, Califia Farms, Chobani, Silk) in Canada:

All five vegan milk brands saw a significant increase in their website traffic in Q1 2021 compared to the previous year's first quarter.
Silk Canada was able to grow its traffic to 144K visits per quarter, which is a 278% increase from Q1 2020.

The average share of mobile traffic reached 70% (vs. 52% last year) amongst the competitive set, where Califia Farms and Chobani saw the highest increases.

Search (organic + paid) remains a dominant traffic channel for the brands in the competitive set, despite its declining share quarter over quarter.

All brands saw an increase in the share of social media traffic, which drove as many as 41% of total visits for Almond Breeze in Q1 2021.

2. Silk Canada is the leader in paid advertising.

Silk Canada and Almond Breeze, the only two brands running digital ads in the Canadian market, increased their ad spend by 139% and 1,818% respectively.

Silk invested more than half of its Q1 2021 advertising budget into YouTube ads, while Almond Breeze ran only search ads.

3. Social media following growth has plateaued for all five brands.

Oatly is the only brand from the competitive set that managed to substantially grow its social following (+20%) since Q1 2020, while the rest of the brands remain with approximately the same social following size.

Oatly’s social following growth came from Instagram, where its community increased by +31% since the first quarter of the previous year.

On Instagram, the brands adhered to the same posting cadence. Califia Farms is the most active brand amongst the competitive set and adds ~17 new posts per month, while Silk Canada posts only ~3 times per month.

Oatly and Silk* are the only two brands that grew their Instagram engagement rate in Q1 2021.

In Q1 2021, Oatly doubled down on the narrative advocating for veganism. The brand also gained a lot of engagement on the posts about the soon-to-be-adopted European Union amendment banning non-dairy milk companies from describing their products by referencing “dairy” terminology (i.e. “creamy”, “non-dairy”, etc).