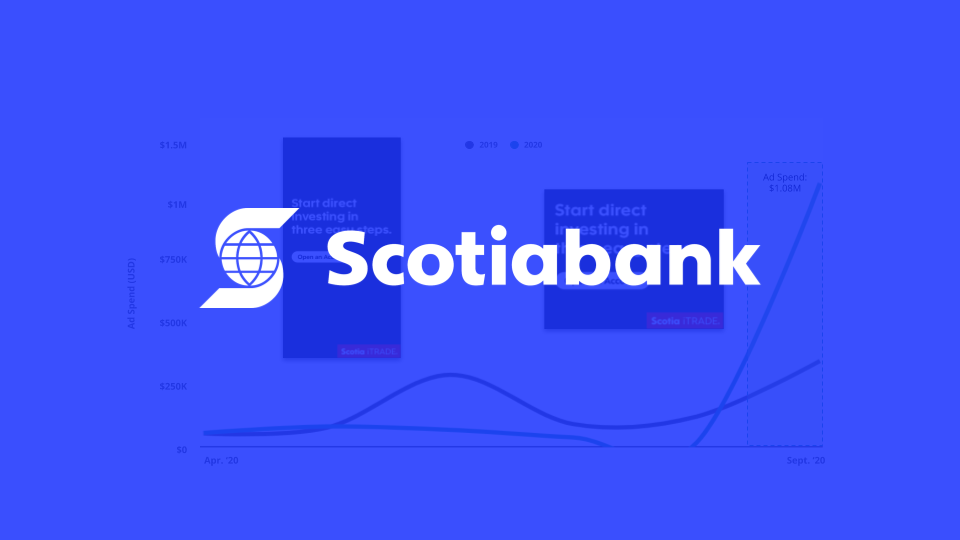 Content & Messaging — Self-Directed Investing: Scotiabank is redirecting their focus onto their iTrade platform - 88% of the September Desktop Display ad spend was focused on three ads which promoted Scotiabank’s direct investing platform Scotia iTRADE. A combination of unemployment, stock market correction and the pandemic has increased the number of people investing their money, resulting in a search interest spike for “direct investing” by +72% YoY.

The iTrade ads encouraged new customers to sign up highlighting that it can be done in “three easy steps.” Numerous steps in the sign up process for new accounts can be a major deterrent to new customers. Ensure that any signup process is as streamlined as possible and consider highlighting this in ad copy to encourage signups.

Paid Channel Focus Allocation — Desktop Display: Scotiabank increased their Desktop Display ad spend by +5845% MoM & +297% YoY in September. September web traffic to scotiaitrade.com was up +54 YoY but did not see a significant lift in web traffic MoM due to the increase in ad spend.

Ad Tactic — Targeting Females, 25-44: Five websites received 70% of the September Desktop Display ad spend. On average, the demographics of Canadian visitors to these websites skew predominantly female between the ages of 25-44. This suggests that Scotiabank is targeting this demographic group with their Desktop Display ads in order to bolster female signups as the demographics of their scotiaitrade.com’s visitors skews predominantly male between the ages of 25-54. Ensure to align your target audience with the main demographic of advertising websites helps to ensure a better conversion with the focus audience.

The ads link to this landing page which provides information on how sign up for iTRADE, ad funds to the new account, and make a trade.

Scotia also includes additional information for new customers further down the page to help address any potential issues or points of friction when the customer is using the platform for the first time.

Search interest for “Direct Investing” and “Wealthsimple” has increased by +72% and +117% respectively YoY, which may have led to Scotiabank significantly increasing their ad spend for their iTrade campaign.

Web traffic to scotiaitrade.com is up YoY on average by +56%. While traffic in September is up +54% YoY, there is not a significant traffic spike which mirrors the spike in ad spend.

Drilling down to page-level September traffic, the landing page for the iTRADE ads received the third highest amount of traffic and saw traffic grow by +26% MoM.

Five websites received 70% of the September Desktop Display ad spend. All Websites except for nhl.com are owned by Hearst Digital.

The Canadian demographics for the top five ad websites on average are predominantly female with the majority of visitors between the ages of 24 - 44. NHL.com is an exception as 83% of its visitors are male.

In comparison, the Canadian visitors to the Scotia iTrade website are predominantly male between the ages of 25-54.