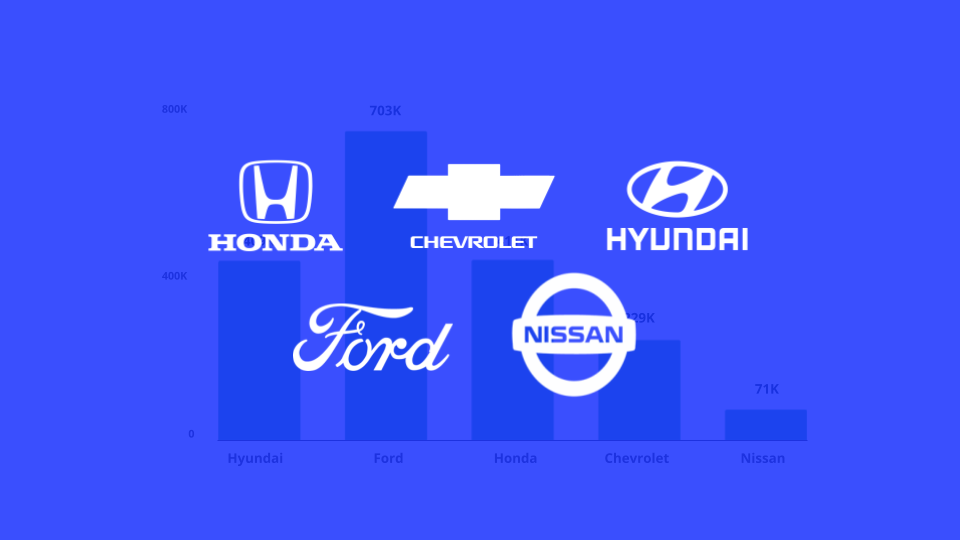 Organic Social — Platform Focus: Most of the car brand audience is concentrated on Facebook, followed by YouTube. While Hyundai, Ford and Honda maintain Canada-specific stand-alone Facebook pages, both Chevrolet and Nissan have Global Facebook pages. All car brands have a sizable YouTube following that on average grew by 6% over the last year. Instagram proves to be the fastest-growing platform for car brands in terms of audience increase. Car brand's Instagram accounts on average grew by 36%, where Ford alone managed to increase its following by 50%.

‍
Organic Social — Content Focus: Car brands choose to post most often on YouTube, Nissan adds as many as 24 new videos per month. While Hyundai only posted 30 videos in the last 90 days it received the highest number of views, which was driven by several sponsored videos that promoted its Palisade and Santa Fe models. Nissan uploaded the highest number of YouTube videos (71) in the last 90 days. Almost half of them were car overview videos published in both English and French.

‍
Paid Social — Budget Allocation: Honda and Nissan spent about $3M each on paid social advertising during the first two months of 2021, which is ~90% of their total digital spend. Nissan invested 88% of its advertising dollars in YouTube videos, while Honda equality split them between YouTube and Facebook. Nissan’s ads promoted different car models, while Honda put $290K behind the video inviting users to book a virtual showroom appointment, and launched several more videos communicating the “Canadian Built” message.

More than half of Hyundai's, Ford's and Honda's social media audience is concentrated on Facebook.

YouTube is the second-largest social platform for the car manufacturers — 65% of Chevrolet’s Canadian following is on YouTube.

Instagram has been an area of the fastest audience growth for car brands. On average their following grew by 32%, where Ford alone increased its Instagram community by 50% YoY.

None of the brands have TikTok accounts which presents white space opportunities to tap into the young gen-Z audience.

Nissan is the most active brand on social media, the brand adds ~70 new posts to its channels every month.

Car brands choose to post most frequently on YouTube, posting car ads and walkthrough videos. Nissan adds as many as ~24 new videos per month.

In December Hyundai ran videos ads for Palisade and Santa Fe models which contributed to a high volume of video views.

Over the last 90 days Nissan uploaded 71 car overview videos — each one got around 19K views.

Ford has the highest engagement rate at 0.9%, and has a fairly high post cadence of 26 posts per month.

Chevrolet publishes the same post twice — in English and French, which explains their high posting cadence over the last 90 days.

Ford has the highest engagement rate among the competitive set (0.9%). The brand leverages humour and contests to engage its followers in addition to showing off new car models.

On Instagram, all car brands enjoy higher engagement (avg. 0.9%) compared to Facebook. Both Hyundai and Ford get the same audience engagement (ER: 1.22%) and publish about once per week.

Honda and Nissan invested the most advertising dollars on paid social media during the first two months of 2021 ($3M and $2.6M respectively), which was ~90% of their total up-to-date digital ad budget.

Nissan invested 88% of its paid social budget in YouTube, while Honda equally spread its budget between the two platforms.

Honda put the most advertising dollars ($290K) behind the video promoting its virtual showrooms and continued to promote its “Canadian-built” message.