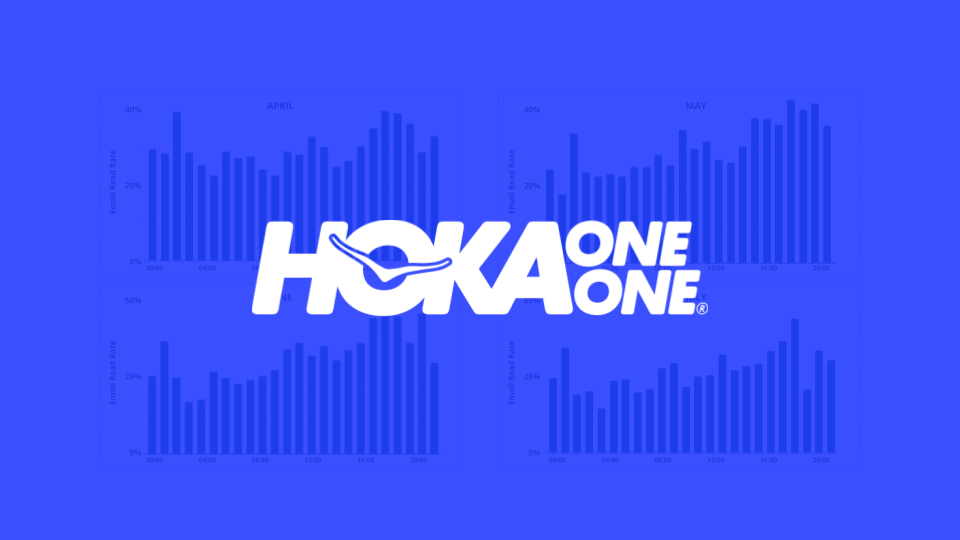 Send Emails Early in the Week: Email campaigns sent on weekdays, particularly Tuesdays and Thursdays, have outperformed their weekend counterparts: Emails sent on the weekdays have higher read rates than those sent during the weekend.

Send Emails After Noon: For North American audiences, emails are more likely to be read during the latter half of the day up until the early morning: While read rates are relatively steady throughout the day, there is a noticeable spike, usually after 7:00 pm
‍
List Segmentation: Leading running brands send a very high volume of email to their list, up to 10 messages per day. However, none of these emails go to the full list, because all leading brands are using very advanced segmentation based on user behaviour and demographics.

This case study will examine the best times of day and day of week to send out email campaigns, as determined by an analysis of industry email data.

In the past 4 months, email campaigns sent during the weekdays, particularly Tuesdays and Thursdays, have outperformed weekends in terms of read rates.

Focusing in on July, the best performing days shifted from Thursday and Friday to Tuesday and Thursdays. As a whole, read rates for this month has declined by an average of -9% compared to June.

As for email send volume, days in the middle of the week see the highest volumes, with Mondays and Sundays generally being the lowest volume days.

July saw a shift of emails being sent during the latter half of the week, with Thursday continuing to be a popular day to send out emails. Email send volume increased by +12% MoM.

As with email send volume, the number of email campaigns sent during the latter half of the week also increased, with campaign volumes increasing by +12% MoM.

In July, the best performing times moved earlier up the day, starting from 2:00pm and ending around 5:00pm PST. Again, read rates this month are -9% lower than June.

For North American recipients, they are more likely to read emails during the evening and early morning. Peak times occur roughly from 7:00pm to 2:00am PST.

While best performing times have remained consistent, there is still a slight drop in read rates during the highlighted time periods, at -2%. Compared to the global audience, however, North American audiences yield higher read rates on average, at +14% this month.

There are certain peaks during the day where mass amounts of emails are being sent, namely early in the morning (4:00 am), later afternoon (3:00 pm), and finally around 11:00 pm at night.

For July, early morning, between 5:00-7:00 am, and around 3:00 pm is when the highest volume of emails are sent. This is a +46% increase in volume for this time period compared to June.

Over the past four months, email send cadence has remained constant, at an average of 10 emails a day across the industry.

Here is the breakdown of competitors and their email send cadence: