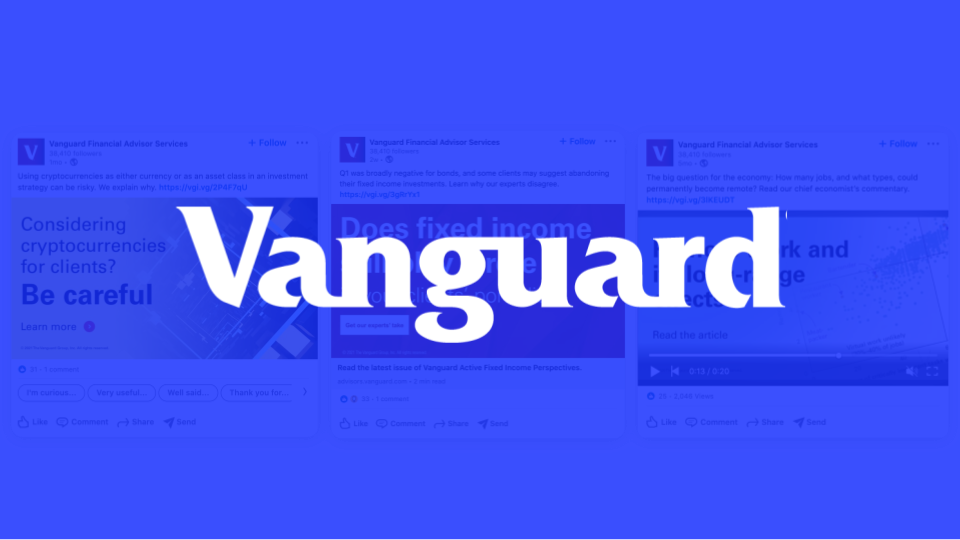 Social Focus — LinkedIn and Twitter: All four financial companies in the competitive set (Pimco, Vanguard, JP Morgan and BlackRock) saw double-digit growth across their social media channels. LinkedIn showed the fastest YoY increase for all four brands. It is also the platform where most of JP Morgan’s and BlackRock’s social followers are concentrated. At the sametime, Vanguard and Pimco have larger social communities on Twitter than on LinkedIn. Only two brands, Vanguard and JP Morgan have separate social accounts for Financial Advisors. However, Vanguard is the only one that actively engages its financial professionals' community. JP Morgan stopped posting on its FA-specific social media channels last year.

Organic Content – Signal Thought-Leadership And Share Success Stories: Vanguard actively posts (~3 times per week) on both FA-specific LinkedIn and Twitter accounts. The company distributes the same content via both platforms. Vanguard's social media content relies on four pillars: thought leadership (32%), market outlook and reports (20%), events promo (20%) and ETF performance updates (13%). When it comes to the top-performing posts in terms of engagement, 2 out of the top 3 posts highlighted the company's successes.

Social Ads – All Four Brands Sponsor Posts on LinkedIn: Despite being active on virtually all social media platforms, financial companies don’t run much advertising on social channels. All brands tend to rely on display ads on proven financial media outlets. LinkedIn is the only social platform into which brands invest their advertising dollars. However, due to the fact that LinkedIn doesn't disclose its data with marketing intelligence tools, there is currently no way to estimate their spending and analyze user engagement.

All four companies saw a double-digit growth in social media following, where JP Morgan recorded the fastest YoY growth of 33%.

The majority of JP Morgan’s and BlackRock’s social community is concentrated on LinkedIn — 75% and 63% respectfully. LinkedIn is, also, the platform that has shown the fastest YoY growth for all four brands.

Pimco and Vanguard accumulated their largest social following on Twitter. This platform showed a moderate YoY follower growth for all four brands.

The majority (51%) of Vanguard’s financial professionals follow the company on Twitter, while 39% of JP Morgan’s FA audience is concentrated on LinkedIn.

Vanguard is much more active on its FA-specific social media channels than JP Morgan. The company on average adds two new posts every week on both LinkedIn and Twitter, distributing the same content via these channels. JP Morgan, on the other hand, hasn’t posted anything new since October 2020.

Vanguard catches FA’s attention with strong post visuals posing a relevant question or stating a strong opinion. The company shares its take on current trends or provides expert advice on how to deepen client relationships or handle difficult situations.

Another regular communication tactic Vanguard deploys is updating its LinkedIn and Twitter FA community every time a new market insights report is up or the company revised a market outlook.

Vanguard leverages its social accounts to promote its ETFs, the company regularly posts performance updates of specific bond funds or reminds which investment options are best suited for particular objectives.

When it comes to the best-performing posts in terms of engagement, Vanguard’s community responds well to the company’s success. Two posts with the highest ER announced Vanguard’s wins.

Vanguard has a different communication approach when it comes to paid LinkedIn posts. The company builds its advertising messages on three pillars:

LinkedIn is the only social channel, where Vanguard runs advertisements for Financial Professionals. Despite the fact that the company maintains an active Twitter channel, it doesn’t fully leverage the advertising capabilities of this platform. In 2021 Vanguard ran only two ads on Twitter (total spend: $16K) that targeted individual investors.

Due to the fact that LinkedIn doesn’t disclose its data to marketing intelligence providers, there is no way to obtain advertising spend and targeting information.

Despite the fact that the brands in the competitive set actively maintain numerous social media channels, LinkedIn is the only social platform in which they invest their advertising dollars.