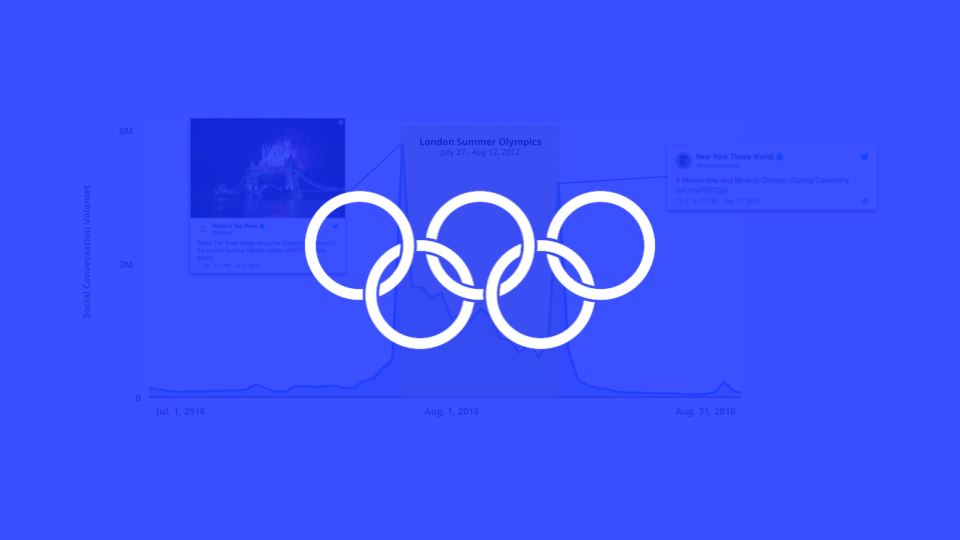 How Sportswear Brands Activate Ahead of the Olympics

In 2016, search interest for “running” related terms such as “marathon”, “sprinting” and “track & field” saw significant increase, especially around the Rio Olympics and the two major marathons.

Looking closer into the Olympic Events, the largest spike in search interest in “running” related terms happened when running events started happening on August 12th. Interest quickly dropped back to normal levels after the Olympics.

As well, in comparison to a non-Olympic year, social posts around “running” drop significantly, even with annual marathons still happening.

During the 2012 Summer Olympics, the volume of social media posts* increased by 769% on July 27th which was the day of the opening ceremony. In total there were 48.5 million social posts during the Olympics with a sharp decline after the closing ceremony.

During the 2016 Rio Olympics, social conversation volumes* experienced less peaks and valley with consistent volume throughout the Games compared to the 2012 London Olympics. Similar to 2012, the volume of social posts fell drastically after the closing ceremony.

Looking at a longer time frame, conversation* around the 2012 Olympics began when the host city’s bid is successful and announced to the public. Conversation is steady until January of the competition’s year where it rises until it reaches its climax in July and August. After the Olympics, discussion falls dramatically and fully tapers off by December of that year.

Are we currently seeing running brands activating on Olympic topics yet?

Currently, there are only two brands that have started publishing content about the 2021 Olympics - New Balance and Adidas.

At the end of August, New Balance released an ad which they ran on YouTube featuring Sydney McLaughlin. The ad highlighted that even though the Olympics have been  postponed the “grind doesn’t stop.” This is punctuated by their current hashtag #WeGotNow. The ad was also posted on their Instagram.

In August, Adidas posted a video to their Instagram featuring numerous athletes who were expecting to compete in the Tokyo Olympics in July. The video’s message is focused around the idea of “one more.” When top athletes train they go for “one more” lap or sprint. The video highlights how the athletes are adjusting to the news and are embarking on “one more” year of intensive training.

‍
How have running brands activated ahead of Olympics in the past?

In March 2016, ahead of the RIO Summer Olympics, Under Armour launched their #RuleYourself YouTube ad campaign featuring multiple Olympic athletes from various sports. The campaign focused on their Olympic journey as well as their rigorous training routines.

On organic social, Under Armour worked with Natasha Hastings, a 2X Gold Medalist in Track and Field Sprinting, to host a giveaway for the #RuleYourself campaign leading up to the Olympics.

UA Running also featured two posts with Natasha Hastings during the Olympics to celebrate her gold medal win for the 4x400m event as part of the #RuleYourself campaign.

From July 25th- 27th, 2016, Nike ran an ad featuring baby representations of Olympic athletes such as Lebron James & Serena Williams without directly mentioning the Olympics. The message focused on the fact that you do not get to choose how your story begins, but you do get to choose how it ends. This was insinuating that athletes have a choice of how hard they work for the Olympic gold.

In February of 2016, PUMA launched a collaborative collection with Usain Bolt, posting the announcement on their main account as well as Usain’s. The collection included fashionable lifestyle wear as well as a pared-down version of Bolt’s signature St Trainer EVO running shoe.