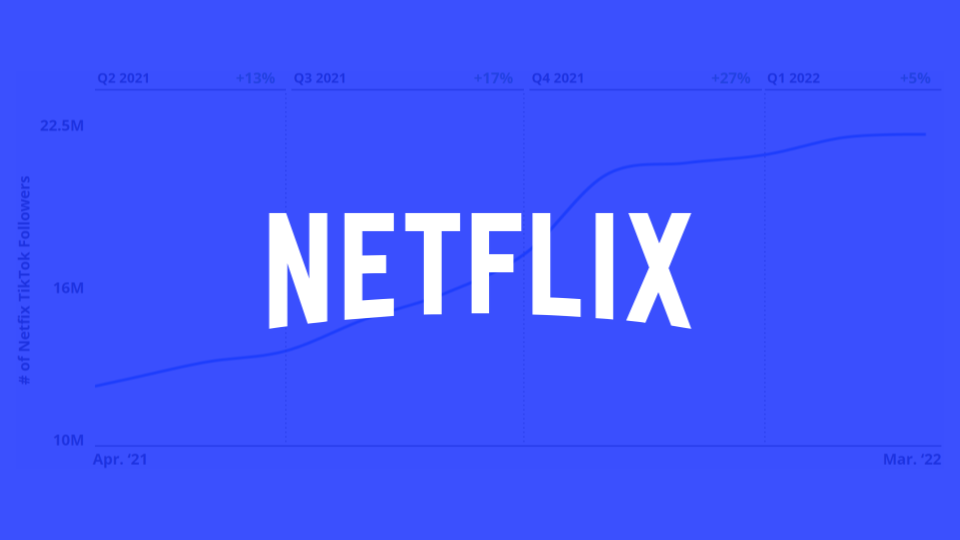 From April 2021 to March 2022, Netflix experienced a +70% increase in their audience on TikTok, gaining over +9M followers. Here's how:

Post Cadence: Compared to the prior year, Netflix nearly doubled its post cadence on TikTok, averaging 100 videos per month.

Influencer Partnerships: Netflix works with various influencers to create content and promote TV shows and movie releases. Some of these partnerships were niche-driven, while others aimed to reach a broad audience. Partnerships have included humorous skits, branded challenges, TV/movie reviews and reactions.

In July 2021, 98% of Canadian Gen Z’s reported watching a streaming service. Q3 2021 marked the first time Gen Zs consumed more TV on streaming services than on broadcast — streaming an average of hour and half of TV online per day.

From April 2021 to March 2022, Netflix experienced a +70% increase in their audience on TikTok, gaining over +9M followers. Netflix saw the greatest amount of growth in Q4 2021, gaining 4.5M followers in the quarter.

Netflix’s TikTok audience is predominantly made up with Gen Zs, with over 90% of its account followers under the age of 24. Additionally, the audience skews female—only 36% of followers are male.

This growth on TikTok was at a much higher rate relative to Netflix’s other social platforms from April 2021 to March 2022.

Compared to the prior year, Netflix nearly doubled its post cadence on TikTok. From April 2021 to March 2022 Netflix posted an average of 100 videos per month.

Netflix works with micro, macro, mid and celebrity influencers to create content and promote TV shows and movie releases. A few examples include:

Some of Netflix’s partnerships are niche-driven, while others aim to reach a broad audience on TikTok. Examples of these partnerships include:

@netflix @officialhambly takes the #ShadowAndBone quiz! Who would you be in the Grishaverse? #netflix ♬ OCTOBER SKY - ALEX KHASKIN

Netflix's TikTok videos use playful subtitles which convey the speaker's emotions. This is done by perfectly timing the words with the video's audio, placing the words in a nonuniform way, and using phonetic spelling. These animated subtitles add value to viewers who watch the video with or without sound.

Netflix creates entertaining content that allows viewers to get to know popular characters and celebrities from their original shows by having them participate in challenges. Often these challenges are inspired by trending challenges on TikTok, such as:

Memes are a common language amongst Gen Zs. According to GWI, 67% of Gen Z TikTok users use the platform to find funny/entertaining content, and 40% of Gen Z social media users follow meme/parody accounts.

Netflix creates funny meme videos that feature clips from their shows/movies or common Netflix binge-watching experiences. These content pieces are light-hearted, humorous and relevant and speak to Gen Z audience in a relatable way.

aint nobody got time for that

Netflix often shares videos that invite viewers to participate in some sort of challenge, such as guessing the show, solving a puzzle inspired by Netflix shows, or spotting the number of items shown in a particular video. Videos generate engagement by encouraging viewers to respond with their answers in the comments.

@netflix can you find all the robot dolls? 👧🏻🔎 #squidgame#netflix ♬ original sound - Netflix

21% of Gen Z adults identify as LGBTQ+ — almost double the rate of Millennials, five times that of Generation X and eight times the rate of Baby Boomers (Source).

Netflix has been a leader in LGBTQ+ representation, ranking as the top streaming service for LGBTQ+ character inclusion in 2021-2022 (Source). Additionally, on Netflix's TikTok account, they often share videos featuring LGBTQ+ characters and relationships.

Netflix keeps up with current trends on TikTok and incorporates them into its strategy. Netflix shares videos inspired by trending themes while featuring clips from its original shows/movies.

According to GWI, half of Gen Zs surveyed said they "often/regularly watch foreign-language TV shows", and 49% said they are interested in other cultures/countries. Netflix features many foreign-language shows and movies on its TikTok. Netflix's highest viewed video on TikTok features Squid Games, a South Korean survival drama television series.