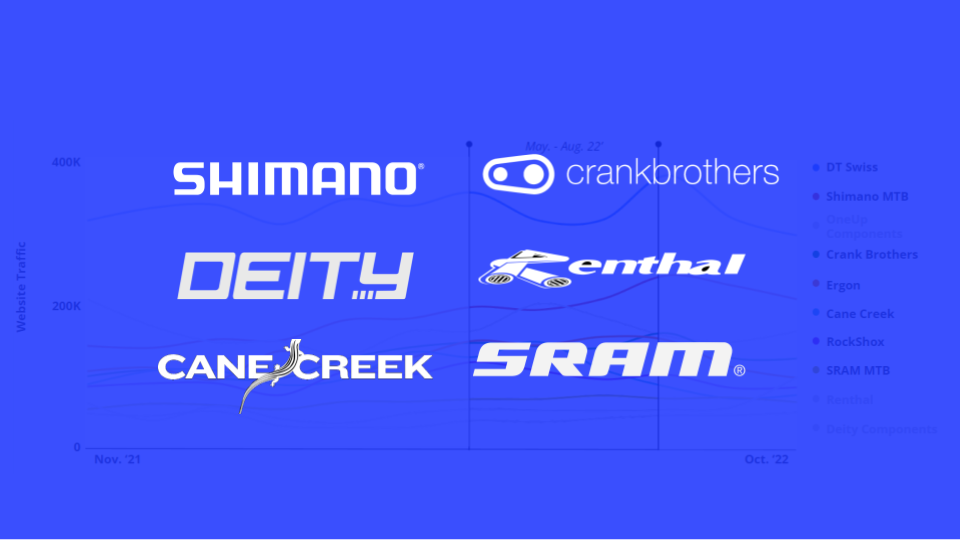 The websites in the competitive set generated 15.3M visits between November 2021 and October 2022. Here’s how:

The following companies were included in the competitive set for this analysis:

70% of competitors had their highest traffic months between May and August 2022.

80% of competitors had their lowest traffic months between December and March.

Traffic was relatively stable month over month with the highest monthly traffic in August 2022 (1.4M) and the lowest in February 2021 (1.1M). Monthly traffic numbers were above average between April 2022, and August 2022.

From November 2021 to October 2022, DT Swiss had the highest total traffic by a significant margin (4M) with equal traffic across desktop and mobile. Shimano MTB’s traffic volume was second overall (2.2M) and the brand had the highest percentage of mobile traffic overall at 88%.

Renthal saw the highest number of page visits on desktop at 6 pages followed by OneUp Components at 5.7 pages. The average page visits across all ten sites was 4.5.

On mobile, Deity Components (5.4) and DT Swiss (5.3) had the highest number of page visits. The average across all ten sites was 3.9 pages on mobile.

Traffic across the competitive set is led by Organic Search (68%) followed by Direct search (16.6%). Display Ads, Email and Social make up less than 5 percent of total traffic.

Organic Search was the dominant traffic source across all brands. Direct followed for all brands with the exception of Shimano, who gained 23% of total traffic from Referrals. For all other brands, Display Ads, Email, and Paid search made up less than 5% of total traffic.