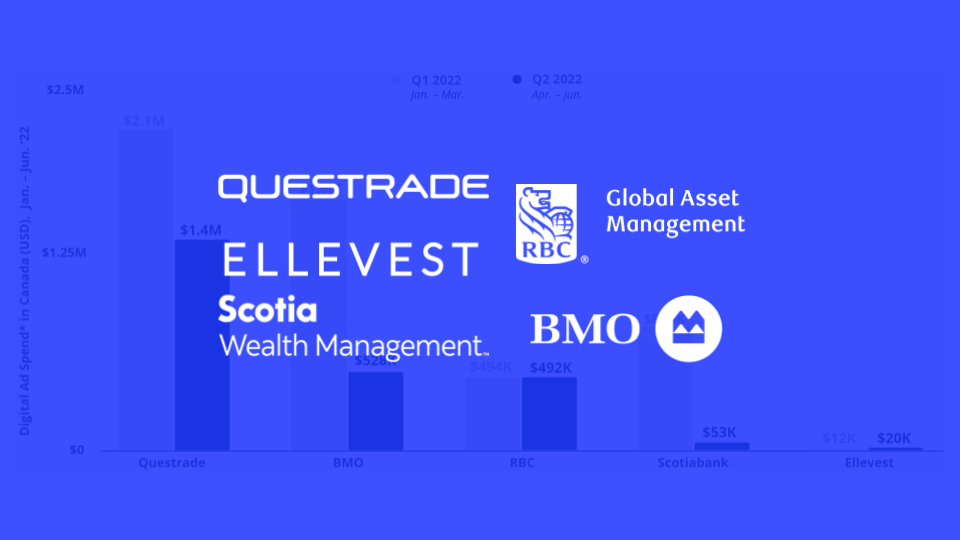 The brands in the competitive set invested $813K into women-led digital ads in Q2 2022. Here’s how:

The following companies were included in the competitive set for this analysis:

Overall Questrade ($3.5M) spent the most advertising dollars in digital advertising for investment services. All brands except Ellevest (+62%) decreased their advertising spend in Q2 2022.

From January 2022 to June 2022, the competitive set invested $7.7M into digital advertising. Paid Search and Display ads saw the highest spending of $2.8M and $2.1M respectively, followed by Facebook ($2M).

Questrade has the largest Display ad spend ($207K) for advertising messaging geared towards women while BMO had the largest Paid Search spend ($193K). Paid Search is the only channel with spends from all five brands in the competitive set.

RBC had the largest Facebook ad spend at $119K and was the only advertiser with women-led messaging on YouTube at $158.7K.

The competitive set invested $247K into Display ads with an average CPM of $11.4 for ad content geared towards women. Questrade saw the highest investment of $207K, which is 84% of the total competitive set spend. 79% of ad formats were presented as HTML Gifs.

Questrade saw the highest spends on Display ads primarily with creative that features women in the forefront as not only working on their own finances but actively engaging and showing excitement about managing their finances.

Questrade’s top gif ads using women-led creative, $62K and $9.5K respectively, seek to infer the improvement of financial decision making through the support and service of their team.

Questrade invested $21K into a Display video that features a couple looking into getting a mortgage. Both parties equally research the possibility of getting a mortgage with Questrade and the ad features an advisor answering their questions to represent constant and consistent service from the team.

Questrade also invested $20K into another Display video ad featuring a group of women having dinner together discussing investment possibilities that could help them with future retirement. The ad creative supports women engaging in financial planning and conversations independently and confidently.

Ellevest is the only brand in the competitive set to include copy with “women” explicitly being advertised to. $10K was spent on the keyword “invest” to rank for people looking for value-based investments, an example of the copy includes “Where Money Works for Women”. However, including women in the copy hasn’t always been a strong strategy for Ellevest, the keyword “investorline” used a women-forward copy and saw a CPC of $40.9.

80% of brands didn’t include any copy with “women”, therefore emotionally-focused copy was highlighted for these brands. BMO spent $86.5K on the keyword “bmo online” to promote the opportunity to invest with planners for retirement linking working with a planner to finding success in retirement. RBC invested $255 on the keyword “rbc gam” to promote their story and the value and diversity of their financial professionals.

65% of the competitive set’s Facebook ad budget was generated by RBC for women-led ad creatives. RBC spent $34K and $29.5K on two different ads with the same actors to portray a couple making financial decisions together. Ad copies focus on advisors being able to help with the process with subtle hints like “with helpful advice”. RBC also spent $19.6K on an ad featuring a woman making decisions in a way that works for her with the title “Invest without compromise”.

$158.7K was invested into YouTube ads between April 2022 and June 2022, with RBC as the only brand in the competitive set to invest in YouTube with women-led creative. The ad creative is 6 seconds in length.

RBC was the only brand in the competitive set with a YouTube ad geared towards women, the spend saw an average CPM of $13.2.

RBC invested their total YouTube spend, $158.7K, into one video in French that uses the same creative as one of their top Facebook ads. The video features a young women making financial decisions on her own as she has the opportunity to work with a financial advisor to make the right decisions. The ad is 6 seconds in length and encourages viewers to start investing by noting a minimum of $100 is all that is needed to start.