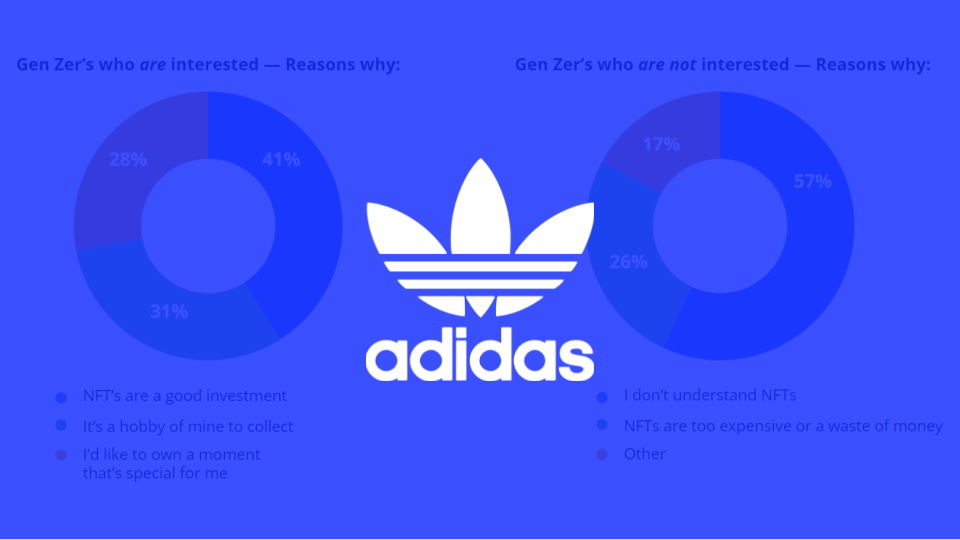 In December 2021, Adidas Originals launched its NFT collection which sold out in seconds, generating $23M in sales in one day:

In December 2021, Adidas launched its first NFT collection on opensea. The brand collaborated with famous creators in the NTF space to produce its digital collection such as Gmoney, Bored Ape Yacht Club, and PUNKS Comic.

Adidas started with 30,000 NFTs available for sale, which sold out in seconds.

Gen Zs who are interested and aware of the digital assets space consider NFTs a good investment. However, those who aren’t interested in buying NTFs say the major hurdle is the fact that they don’t understand how they work. Brands that are willing to take on education leadership will have an opportunity to build loyal young audiences.

Adidas has localized pages to introduce its Metaverse project to its audiences that redirect traffic to a global page called “Into the Metaverse” (available only in English). The brand trades its NFTs through Opensea and moderates the community on Discord.

Both web pages (local and global) saw traffic spikes in December 2022, when the NFT collection was launched. Since then the traffic has declined to ~2K monthly visits. This is explained by the fact that the brand sold all its inventory in just one day and announced the closure of Phase I of the project in May. It’s likely that the websites will see more visits once the details of Phase II are announced.

While Adidas sees a lot of untapped potential in entering the NFT space, the brand took a phased-out approach when venturing into the new domain.

Phase 1. During the first phase, fans could purchase Adidas Original NFTs and claim exclusive physical merch. The first phase lasted for six months from the collection launch (Dec 17th, 2021) until May 18, 2022.

Phase 2. Currently, Adidas is in Stage 2 of the “Into the Metaverse” project. As of June 8th, the brand hasn't yet revealed what Phase 2 will entail.

Such an experimental approach allows Adidas to learn from each step it takes in the new direction, improve and remain agile in such a fast-paced and unpredictable environment.

While Gen Zs are quick adopters of all things digitals, many still cherish physical objects. One of the surveys that studied Gen Z’s attitude toward digital assets uncovered a lot of positive sentiment towards physical assets.

Gen Zs explain their unwillingness to invest in NFTs is due to the lack of a physical element to the purchase. To counter this, Adidas supported its NTF launch with exclusive merchandise — everyone who bought a token could claim a piece of Adidas Originals swag.

A sense of belonging to an exclusive club has been an integral part of the NTF world. Adidas leverages this aspect by making its unique merch available only to the NFT token holders. The brand also hints that more exclusive digital and physical products and experiences will be available to its NFT holders.

The collection included a tracksuit, a hoodie with a blockchain address on it, and an orange beanie. To produce unique merchandise, the brand collaborated with Bored Ape Yacht Club, Punks Comics, and GMoney.

Adidas took an approach to community-powered growth. On January 20, 2022, the brand launched its official Discord channel, which grew to 59K members by June 2022. To continue building up the sense of exclusive community, Adidas made its Discord account a closed community.

Adidas has intentions to further build out and invest in this community and it clearly states that it will learn and evolve as the community grows:

The intent is this thing, this NFT, you belong to a community, and we continue to add value to that over time, and it’s gonna also evolve with what we’re learning about the community and how they’re changing and evolving.

Entering into uncharted territory, Adidas collaborated with the most prominent players in the domain to effectively tap into their audiences.

Adidas partnered with the following pioneers of the NTF space:

Adidas realized it was breaking into a new space, and while its NFT collection can uplift brand attributes such as “innovative” and “tech-forward”, there are many consumers who don’t understand how NFTs work, and what value they hold and why one would invest in them.

In fact, 57% of Gen Zs don’t invest in NFTs because they don’t understand them.

Adidas put a lot of attention into building out an extensive FAQ section on its “Into the Metaverse” page. The brand also moderates community discussion in Discord and aims to answer questions, guide discussion and provide educational leadership to its community.

With sustainability in mind

Adidas is currently experimenting with NFTs and the Metaverse and trying to tap into the young and tech-forward community. At the same time, the brand realizes that this game could also become a pillar of its sustainability strategy.

While this notion is not currently a part of Adidas’s public story, the brand sees the metaverse sphere as an opportunity for sustainability-minded growth in the medium and long term.