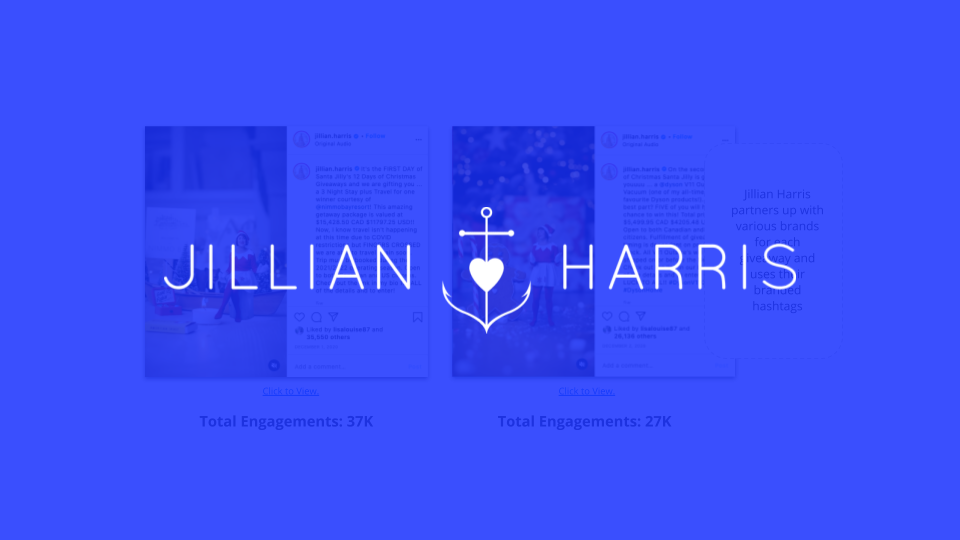 How A Mommy Influencer Giveaway Increased IG Followers by +5,800%

Influencer Tactic — Partner with YouTubers & Family Influencers: There is currently a whitespace opportunity as the competitive set is focusing largely on partnering up with mommy influencers on Instagram. However, some of the biggest influencers are family influencers on YouTube who showcase their day to day lives with their children. The majority of these family influencers have toddlers around the ages of 1-5 years old, which is the perfect audience for kid content creators.

Influencer Tactic — Host Giveaways With Mommy Influencers: Brands who partnered up with Jillian Harris (a mommy influencer) for a holiday giveaway saw a +5800% (24K)  increase in Instagram followers. When working with influencers to host giveaways, make sure that followers are required to follow your brand’s social media handles to enter the contest. Leverage the follower base of the influencer to reach a wider audience and to create hype around your brand.

Giveaway Tactic — Announce Winners on Your Website: Rather than announcing the winners of the holiday giveaway on social media, Jillian Harris announced all giveaway winners on her website which led to a +104% increase in site traffic. Consider the objectives of your campaign and if you are driving viewers to your website, take this opportunity to drive viewers to your blog content and YouTube channel.

Content & Messaging  — Nursery Rhyme Remix: Pinkfong works with celebrity musicians from all around the world to create remixes of their classic nursery rhymes. For example, they worked with a Korean celebrity (Yoo Jae Suk) to create a K-Pop version of Baby Shark to raise brand awareness in Korea. When working with local celebrities, make sure to ask for their audience demographic data to verify that they have a significant following in the market that you want to advertise in.

Overall, kid content brands rarely work with influencers to promote their brand, Pinkfong had the highest number of influencer posts in 2020, followed by Little Baby Bum.

The types of influencers kid content brands work with fall under 3 main categories:

LBB works with mommy influencers and reposts user-generated content on their Instagram channel to promote their merchandise.

Mellodees incorporates their main mascot as part of their influencer posts and their association with celebrity DJ, Marshmello, has helped raise brand awareness.

For the launch of their new Baby Shark Dancing DJ toy, Pinkfong worked with eight mommy influencers who published an instagram review of the product, the campaign resulted in 99K total engagements.

The sponsored influencer posts were in paid partnership with wowwee (toy distributor) rather than Pinkfong, however every sponsored post tagged @pinkfong.official and used their hashtag (#babysharkdancingDJ & #babysharkfinfest).

The giveaway posts themselves generated a significant volume of engagements averaging 25K engagements per post which is more than 2X higher than Jillian’s average engagement volume.

Fans had to follow the social media accounts tagged in each giveaway post to enter. As a result, Nimmo Bay Resort, who partnered up with Jillian Harris gained 24K followers in the month of December during the same time Jillian launched the giveaway