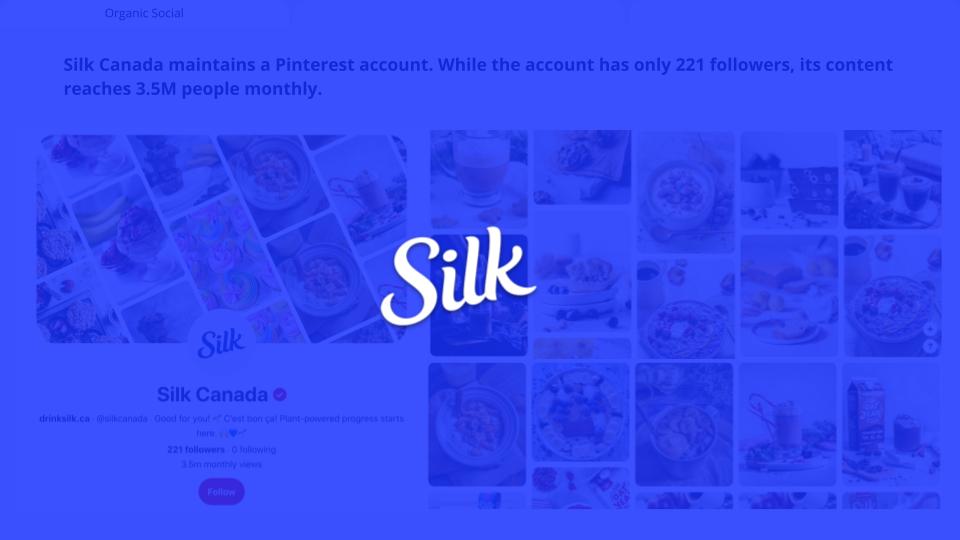 Organic Social — Invest in High-Quality Photography: Despite the fact that Silk Canada was able to accumulate 106K followers on Facebook, the brand stopped actively engaging its Facebook audience as of March 2020 and re-invested its efforts into Instagram. As of February 2021, Silk Canada has 6K followers on Instagram that actively engage with the brand (ER: 2.5%). Earlier in 2020, Silk shifted its visual directions from designed visuals to high-quality food photography and saw its engagement rate increase. The brand doesn’t run frequent giveaways but often collaborates with influencers.

Paid Advertising — Focused Budget Allocation: Silk Canada paused Facebook advertising in March 2020 and only ran text search ads between August – December 2020. The brand resumed paid advertising in 2021. Silk invested $335K to raise brand awareness between January – February 2021, which is 165% more than the company spent during the whole of 2020. Most of the advertising dollars ($215K) were spent on promoting a YouTube video that inspired people to add more plant-based meals to their diets. The rest of the budget was split between Facebook ($99K) and search ads ($21K).

Web Content — Invest in Content that Attracts Search Traffic: In January Silk Canada saw a +168% web traffic increase compared to the same month last year. Organic search drives most of the brand’s web traffic (30%), followed by paid search (22%). Most inbound search traffic lands on one of the product pages — plant-based beverages being the most searchable product category. Silk also maintains an elaborate Recipe section on its website with more than 150 vegan recipes. However, this area accounts only for 4% of total inbound search visits. Silk announced its intention to launch a Blog and share plant-based stories, signalling its intention to further optimize its website for attracting inbound search traffic.

Silk Canada’s digital ecosystem is designed to drive search traffic (both paid and organic) to its website and grow social following.

Facebook accumulates 97% of Silk’s social following. However, the brand minimized communication on this platform and re-invested its efforts in growing and engaging its Instagram followers.

On Instagram Silk primarily posts photos (54%) and oftentimes combines them into carousels. While the brand doesn’t post very often, (less than once per week) it has a 2.5% engagement rate, which is higher than the competitive set average*.

In 2020, Silk revised its visual art direction and pivoted to more lifestyle food-focused photography. This shift helped to increase Instagram page ER by 59%.

Silk Canada puts food first and foremost on its Instagram and adds contextual, casual captions to the posts. The brand also coined the term “intermittent veganing” and aims to inspire their followers to add more plant-based meals to their diets.

Silk collaborates with various influencers to create content and reach wider audiences — from vegan bloggers to nutritionists and coffee enthusiasts.

At the end of 2020, Silk ventured into Reels, posting four recipe videos so far. The brand also repurposes its Reels into feed posts to maximize their reach.

In 2020 Silk Canada spent $127K on digital advertising. Half of this budget (50%) was invested in Facebook alone, while search ads accounted for another 47% of the spend. Silk Canada seized its Facebook advertising in March and didn’t resume until the end of the year.

In 2021 Silk activated its paid advertising channels. The brand launched a YouTube video campaign and resumed its Facebook ads.

Between January – February 2021, Silk invested $215K (65%) of its YTD advertising budget to support a YouTube video that inspired consumers to add more plant-based meals to their diets.

Early in 2021 Silk resumed advertising on Facebook, investing $99K during January and February. 65% of this budget was spent to support its protein-enriched milk and oat beverage.

Silk spent $21K on text search ads targeting both branded and non-branded keywords in English and French. The brand didn’t run any product ads during this time.

During 2020-21 Silk invested 57% of their advertising dollars (~$216K) to strengthen its overall brand image and promote the idea of “intermittent veganing”. The Almond milk line received 19% ($71K) of the budget, followed by yogurts.

Search ads were the biggest paid traffic-generation channel for Silk Canada and drove 93% more traffic in January 2021 than the previous year.

Organic search is the biggest traffic channel to silkcanada.ca

91% of traffic comes to silkcanada.ca from non-branded keywords. Silk captures traffic for high-volume keywords such as “coconut milk unsweetened” and “almond milk”.

50% of inbound search traffic lands on the product pages, the majority of which (42%) comes looking for plant-based beverages.

Diving into the plant-based beverages, coconut (13%), oat (12%) and almond milk (10%) are the top three most searchable non-dairy milk types.

Homepage is the second most popular landing page for the inbound search traffic (31%), followed by the Save Now page that hosts discount coupons.

Silk has an elaborate Recipe section with more than 150 different recipes, which helps to capture the traffic from consumers looking for vegan meals. Currently, the Recipes page accounts for 4% of all inbound search traffic, with Chocolate Cinnamon Cake and Dairy-Free Rice Pudding recipes being the most search for.