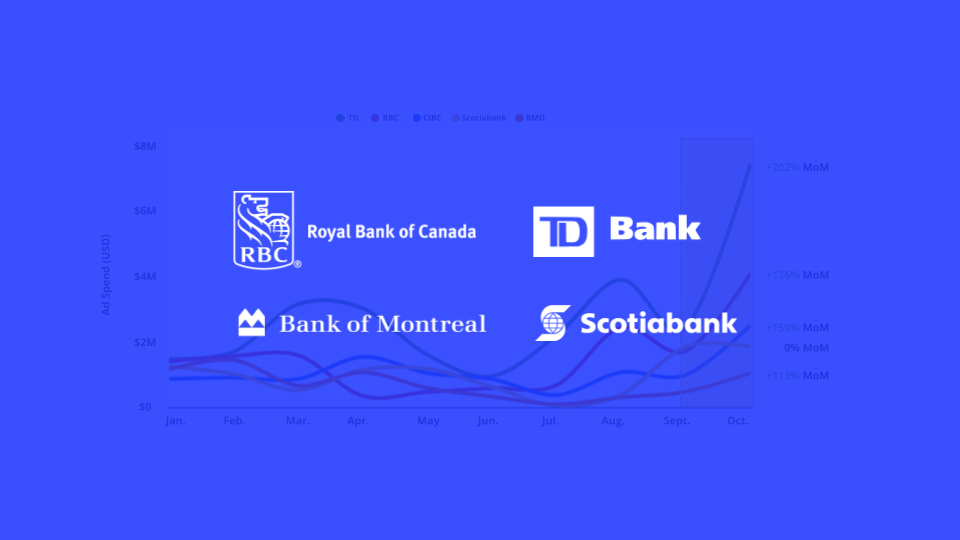 Paid Channel Focus Allocation — Facebook & YouTube: Ad spends from the Big Five Banks (TD, RBC, CIBC, BMO, & Scotiabank) increased by +68% YoY in October. 88% of the October total ad spend was focused on YouTube & Facebook which saw MoM growth in ad spend of +305% & +125%, respectively. In the past year, the Big Five Banks have typically focused more heavily on one platform over the other. October marks the first time that ad spend has been near evenly allocated to each platform.

In addition, Facebook had 33 times more ads placed by the Big Five Banks in October than YouTube. This may be due to Facebook’s low average CPM ($3.79) in October compared to YouTube ($26.22) which allows for a cheaper and broader reach.

With the sudden increase in ad spend on Facebook & YouTube, the platforms may be more crowded with ads than usual (especially Facebook). Which can result in higher CPMs. Consider testing ads in other channels to capitalize on the absence of competitors, or be more strategic with how you are targeting your ads on Facebook & YouTube to connect with the audience through the noise.

Facebook Tactic — Link & Video Posts: 79% of the Big Five Bank’s October Facebook ads were link posts while 18% were video posts. Less than 3% of posts were carousels, statuses, or photos. The Big Five Banks are focusing on link posts as these allow them to provide quick links to the products/services they are advertising. Video links are best for grabbing the audience’s attention and increasing brand awareness. Consider the intent behind the ad and use the format which best helps to convey your message. Carousel & photo posts can also be effective and are currently being underutilized by competitors.
‍
Facebook Tactic — A/B Testing: Both RBC & CIBC are A/B testing different ad copy on their Facebook ads. By A/B testing, RBC & CIBC are able to see which ad copy performs the best and then allocate more spend to optimize and boost the campaign. Though, Facebook A/B testing is not only limited to the ad copy, but can be used to test different designs, interests, genders, age ranges, and more. Consider A/B testing your Facebook ads based upon their individual goals (e.g., signups, brand awareness, etc.) to help optimize your ads and improve their conversion rates.

The total ad spends of the Big Five Banks (TD, RBC, CIBC, BMO, & Scotiabank) has fluctuated between YoY increases and decreases since the beginning of the year. Though, total ad spend has reached a new high in October, increasing by +68% YoY.

All of the Big Five (except Scotiabank) significantly increased their digital ad spend in October, with TD, CIBC, & RBC all hitting a new YTD high.

In the past year, the ad spend for each platform has see-sawed; with one seeing a decrease in spend while the other saw an increase. Though, the ad spend increase in October marks the first time ad spend has increased significantly for both platforms at the same time.

In October, on average, 43% of ad spend by the Big Five was spent on YouTube while 41% was spent on Facebook.

Despite accounting for an average of 43% of the Big Five’s total October ad spend, YouTube accounted for only 1.3% of the creatives for the month. This may be due to Youtube’s high average CPM of $26.22.

TD is responsible for 71% of the October Facebook ad spend increase, with an ad spend increase of +243% ($3.5M). Though, TD’s number of unique creatives only increased by 0.7% MoM (+4). This suggests that TD did not launch many new creatives but rather increased their investment in their current campaigns.

The top Facebook ads in October were mostly published in September and were optimized in October. These ads focused on opening new accounts as well as incentive offers.

79% of the Big Five Bank’s October Facebook ads were link posts while 18% were videos. Less than 3% of posts were carousels, statuses, or photos.

In October, RBC’s top three ads all focused on their iPad incentive where they A/B tested different ad copy. The copy that highlighted a “LIMITED TIME OFFER” as well as “Banking is easy” received the highest amount of ad spend.

Similarly, CIBC’s top three ads in October all focused on driving sign-ups for their Aventura Visa card and A/B tested three different types of copy. The ad which highlighted “up to $400 in value” and a “first-year annual rebate” received the most spend.