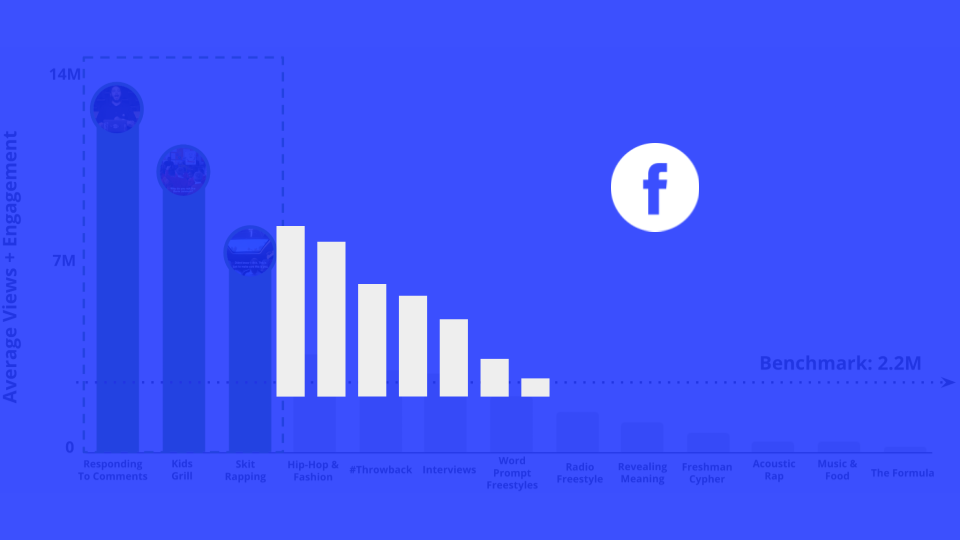 Content buckets that had the highest average views & engagement in the USA hip-hop space include:

Similar to on YouTube, Rap Battles are a viral segment with an average of 22M views and engagements due to Wild ‘N Out’s success. This video has led to higher averages in the segment with 72M views.

Content Opportunities: Another Wild ‘N Out segment that has seen high views on Facebook includes Hood Jeopardy (15M views). While untraditional to rap battles, it depends on one’s artistic creativity. A way to spin this is to think about existing formats that may appeal to different demographics and find a way to relate it to your audience in a unique & entertaining way.

*The following viral videos were omitted from the data set to avoid any skewing.

While predominantly popularized by Noisey’s “The People vs.,” this video format invites artists to read mean comments about themselves on the internet and respond.

Content Opportunities: XXL created a series where their freshman respond to mean comments about their cyphers. This could be an opportunity to leverage comments from previous content about artists hosted by Red Bull or other partners.

Kids Grill is a format by Noisey that invites artists to a classroom with primary school students, where they are asked a series of questions and must respond in a way that is appropriate and meaningful for the children.

Content Opportunities: There is an opportunity to incorporate a style similar to this with contrasting demographics (adult content like rap with a PG audience) to influence prompts for freestyles or artistic challenges for artists.

Skit Rapping incorporates content creators interests’ to build a series of scenarios where they can freestyle or perform for unexpecting audiences such as driving an Uber or delivering a DoorDash order.

Content Opportunities: While this content category is played out and sometimes coming off as scripted, it speaks to an opportunity for more content scenarios, similar to the success of James Corden’s Carpool Karaoke. A new content format could focus on a relatively mundane location that could be transformed for performances & challenges.