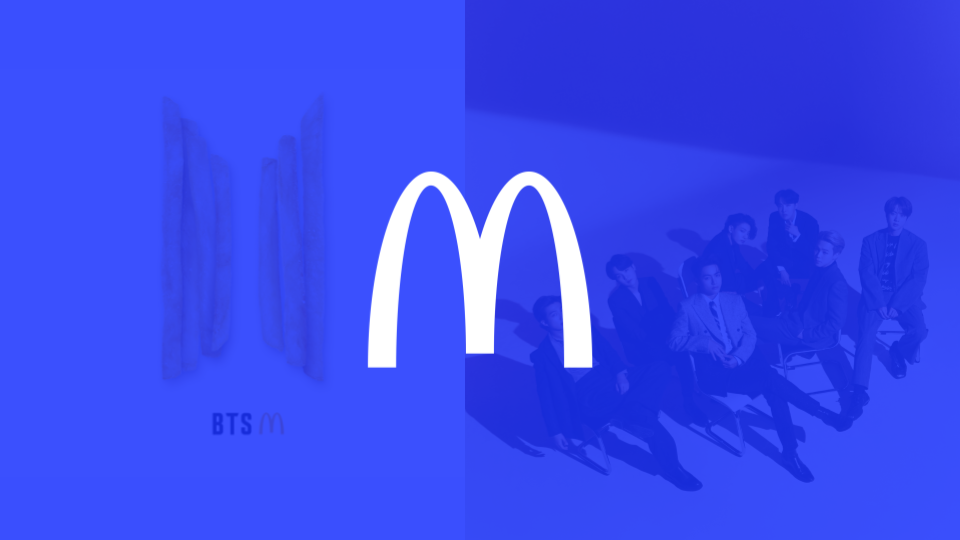 Driving Sales Through Collaborations with the Top Musicians in the World

The factors that led to the success of the McD x BTS collaboration were the following:

Creating Opportunities for User-Generated Content: For the BTS collaboration, McDonald’s introduced exclusive purple packaging featuring the BTS logo which resulted in thousands of consumers sharing their DIY creations using the BTS meal packaging. McDonald’s also created a sense of urgency by launching two new sauce flavours that were only available in stores for a limited-time, resulting in consumers sharing their reviews of the sauce on social media. In addition, the brand launched BTS x McD merchandise which included tote bags, sweaters, tshirts, socks, and hats to further generate hype and awareness around the collaboration.

Giving Fans a Sneak Preview: For the launch of the campaign, McDonald’s created a poster with release dates of each country, similar to a musical artist announcing their tour dates. Leading up the launch, McDonald’s published a schedule of all of the events happening on social media, which is a tactic commonly used by K-Pop artists. Fans love getting access to information ahead of time so they know when to tune in.

Engaging with Consumers Live via YouTube: Three “Lunch Parties” were planned for the campaign, where a live YouTube video was broadcasted to the audience to show behind the scene clips and gave an exclusive sneak peek of the BTS x McD merchandise. Live videos are a great way for brands to engage with their consumers and answer any questions they may have in real-time.
‍
Incorporating Music into Campaigns: The McDonald’s collaboration was timed perfectly with the launch of BTS’ new song “Butter” which was released on May 20th, 2021. “Butter” was the official song featured in McDonald’s advertisements and used in the majority of TikTok videos, making the song go viral.

On April 19th, 2021 McDonald’s announced that the brand would be collaborating with BTS, a South Korean boy band, as part of their “Famous Orders” program (previously featuring Travis Scott and J Balvin). The BTS meal became the first “Famous Order” meal to launch globally, in 50 countries and six continents.

BTS stands for Bangtan Boys and is a South Korean boy band with seven members who debuted in 2013. They are the first group since the Beatles to win the number one spot in the Billboard 200 chart for three of their albums.

BTS has gained international recognition and has a loyal fan base all around the world. Between 2013 and 2020, there were over 2.3 billion* mentions of BTS on social media, with each of their YouTube music videos generating over 1.2 billion views.

BTS has amassed a huge following on social, with the largest audience on YouTube with 52 million subscribers, followed by Instagram with 43 million followers. The boy band is also heavily active on TikTok and already has 36M followers on the platform.

The BTS collaboration was officially announced on all of McDonald’s social media channels on April 19th, with Instagram generating the highest volume of engagements with 585K likes.

Leading up to the launch, McDonald’s published a schedule of all the events happening on social media, which is a tactic commonly used by K-Pop artists — giving fans access to information ahead of time so they know when to tune in.

Three “Lunch Parties” were planned for the campaign where a live YouTube video was broadcasted to show behind the scene clips and gave an exclusive sneak peek of the BTS x McD merchandise.

On TikTok, McDonald’s posted a series of videos showing the members enjoying the BTS meal and highlighting the exclusive sweet chili and cajun sauce.

The McDonald’s collaboration was timed perfectly with the launch of BTS’ new song “Butter” which was released on May 20th, 2021. As of June 2021, the video has generated 338 million views on YouTube. “Butter” became the official song featured in McDonald’s advertisements.

On May 26th, McDonald’s launched a YouTube ad which featured all seven members and introduced the BTS meal. In total, the ad generated 21 million impressions.

To further support the campaign, McDonald’s ran paid search ads which directed users to the app, highlighted the new sauce flavours, and created a sense of urgency.

Tactic #1. “Limited Time” copy creates a sense of urgency for consumers. Both the BTS Meal as well as the two new sauces (Sweet Chili and Cajun) are only available for a limited time.

For the BTS collaboration, McDonald’s introduced exclusive packaging to select countries which created an opportunity for consumers to create social content. Previously, the Travis Scott meal did not include campaign-specific packaging.

Google search interest for the term “BTS McDonalds” increased by +428% on May 26th for the official North American launch. On June 9th, there was a +900% spike in search interest due to Indonesian McDonald’s branches being forced to shut down due to high order volumes.

On May 26th, www.mcdonalds.com saw a +144% increase in site traffic from 1.0M site visits to 2.5M site visits for the North American launch.

Following the announcement, McDonald’s gained +54K Instagram followers in April and during the official launch month, the brand gained +97K followers on the platform.

The exclusive BTS packaging was only available in select McDonald’s locations, creating a demand for the limited edition purple packaging. Consumers were selling the BTS packaging online on sites such as Etsy, Craigslist, and Poshmark from $24 to over $100.

The BTS collaboration grabbed the attention of multiple media outlets, with over 3K articles and 1.1M engagements in total in North America.

Top user-generated content categories about the BTS meal on TikTok include:

In summary the BTS collaboration was McDonald’s most successful “Famous Order” campaign as of June 2021. The BTS Meal campaign generated: