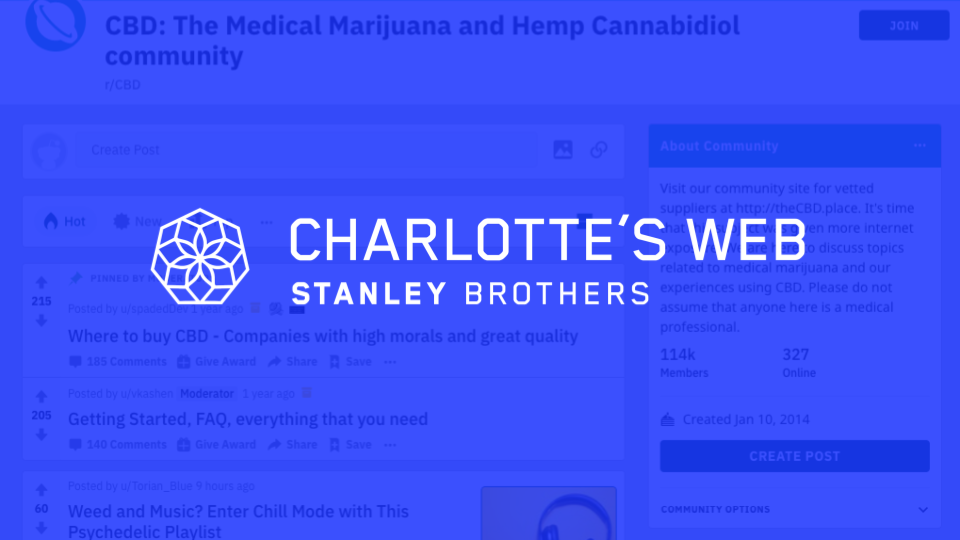 Focus Allocation — Reddit: There are three factors that suggest Reddit as a white space for reaching the CBD audience:

1. Demonstrated Ability to Generate Results: Charlotte’s Web has generated 30% of its social traffic on reddit in the past 6 months, despite spending little ad spend on the platform (compared to YouTube).

3. Low Competition From Other Brands Compared to Other Channels: Out of all the analyzed competitors, only Charlotte’s Web and Medterra have allocated any ad spend to Reddit and both competitors have spent very little on the platform. (Medterra spent 1.9% of their ad budget on reddit in the last 6 months, roughly $1600 USD).

Tactic — Reddit Advertising: Some brands successfully activated reddit organically, however many other have failed to do so due to the culture of the platform. Organic activations can be considered, and some examples are provided in this case study, but advertising is a less risky and proven method to activate on the platform.

Tactic — Subreddit Targeting: Run ads on specific subreddits that cater to the interests of your target audience. Use tools such as redditlist.com to identify the top subreddits for various interest categories.

In the last 6 months, Reddit has been Charlotte’s Web’s top-performing social platform, averaging 30% of all their social web traffic.

This gives reddit.com a CPM of $0.94 compared to youtube.com’s $18.05, making it a far more cost-efficient method of advertising.

These are the top display ads that Charlotte’s Web has placed on reddit.

For these ads, Charlotte’s Web leads with copy that resonates with their target audience rather than product description.

There are also a lot of specialized cannabis-related subreddits, ranging from subreddits dedicated to growing cannabis to showing off how to roll your own joints and more.

However, before organically marketing on Reddit, it is important to note that Reddit as a platform is often not welcoming of organic promotion from brands themselves. Reddit’s community guidelines state: “It’s perfectly fine to be a redditor with a website, it’s not okay to be a website with a reddit account.”

Here are examples of how some brands have found creative ways to promote themselves on Reddit without using Display ads through sponsoring posts and AMAs (Ask Me Anything):