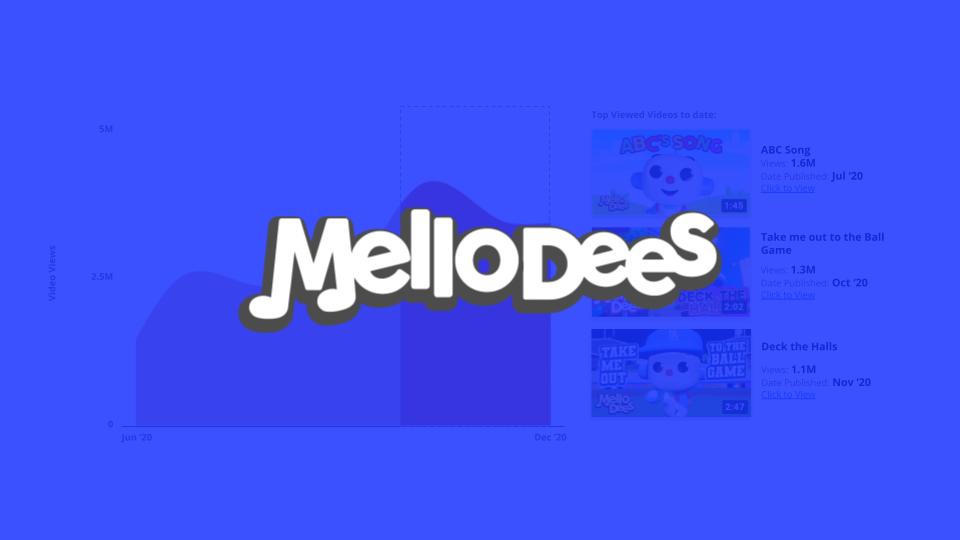 Content & Messaging — Focus on One Niche: Since Mellodees’ launch in June 2020, their YouTube following has been growing at an average of 27% each month, with their monthly video views accumulating to just over 4M in October 2020. One of the reasons they were able to achieve that is by sticking to one niche (electronic dance music). Short nursery rhyme videos (under 3min. long) are their most popular content category and since their launch, they have been focusing on just that niche. Even when branching out to longer videos, those are only compilations of their popular nursery rhyme songs. This makes it easy for parents to know what to expect when they come to Mellodees’ channel and makes them a clear choice when they’re looking for nursery rhymes for their kids.

Influencer Tactic — Music Produced by Marshmello: Mellodees was able to get considerable PR coverage upon launch as their music is produced by celebrity DJ Marshmello. Partnering up with professional musicians is a great way to generate hype and brand awareness around your brand. In addition, Mellodees even created a character that was modeled after Marshmello, called ‘Lil Mello, which is featured in almost all of their YouTube videos.

Since Mellodees’ launched in June 2020, its YouTube following has been growing at a steady 27% MoM rate, reaching 11K in January 2021.

As well, their monthly video views spiked in October, accumulating to just over 4M views, with average video views of 2.8M a month.

70% of the videos are under 3 minutes. Those ranging between 10-30 are themed compilations of shorter songs and remixes.

Mellodees launched two stand-alone websites — one houses the videos and free downloadable games, while the other one is an e-comm site selling branded merchandise.

The Mellodees launch was accompanied by considerable PR coverage, mainly covering the founder persona, Marshmello, and appearance of this animated character in the show.

However, since their website launch in July 2020, www.mellodees.com has been generating very little traffic, averaging just under 500 web visits each month.

As for the eCommerce site, there was a brief spike in traffic after the initial launch before traffic dropped*.

More than half (54%) of Mellodees audience is based in the US, followed by another english-speaking countries — Australia and Canada.

YouTube, being the main outlet for Mellodees’ content, is where most of their audience comes from. TikTok is the second largest social media platform by the number of subscribers, closely followed by Instagram.

On TikTok, Mellodees leverages trending TikTok sounds to create mashups from the snippets of its existing YouTube videos.

Instagram is one of their most frequently updated platforms, with an average posting frequency of 17 posts per month.

Most of the time, Mellodees’ also reuses the same captions across each platform; however, there are times where they will include links to their YouTube videos in their tweets.

Mellodees uploads their nursery rhymes to its Spotify account, with their most played song generating over 250K listens.