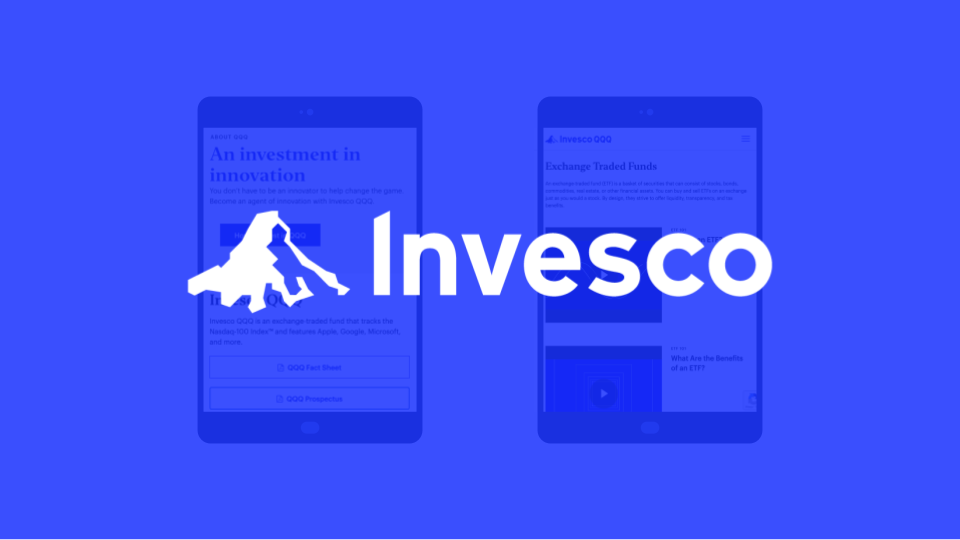 Building a Strong Content Strategy to Appeal to the Everyday Investor

Content Tactic — Messaging for the Everyday Investor: Invesco created a series of user-friendly landing pages that differ entirely from their corporate website to promote one specific ETF called QQQ. This page differs from their corporate page to cater to a new audience. While the corporate page maintains a level of finance jargon and bright imagery, the QQQ pages are entirely aligned in verbiage and design. All pages that are part of the QQQ subdirectory are minimal, use the Invesco blue to highlight buttons and links and use clean imagery when needed. The QQQ pages are easy to read and feature lessons about ETFs. By unifying their message to support anyone investing in ETFs, they built the “Agents of Innovation” video series on YouTube. The videos place everyday people in innovational breakthrough scenarios as a play on their investment building these companies.

Paid Advertising — Conveying Accessible Ideas: Invesco has been increasing their ad spend by +164% from January through February 2021. Since November 2020, they have made changes to their Display ad creatives. Previously using verbiage that focused on financial terminology and vague explanations of the QQQ, they have shifted to an approach to support the everyday person. They build accessibility into their ads by focusing on:

Brand Awareness — Leveraging Trends: As the Official ETF of the NCAA, Invesco built a strong campaign to support March Madness basketball this year. Living in an isolated world due to COVID-19, they were able to build an AR game with basketball player Grant Hill. This game is supported by a full landing page explaining how the top companies in the QQQ contribute to watching, living and experiencing basketball on and off the court.

After a year of low app usage in the United States, Invesco’s Daily Active Users (DAU) increased by +84% from January 2021 to February 2021.

Invesco’s ETF “QQQ” was gaining popularity on Google from January to February 2021. This spike matches the timeline of the GME Reddit spectacle.

In February 2021, Organic Search garnered the highest incoming traffic at 272K. The top three search terms were “invesco”, “qqq” and “etf”. Together these search terms brought in 35% of Invesco’s total traffic in the United States for February 2021.

Invesco.com is the main domain which leads directly to their corporate page. They built a subdirectory specifically for QQQ that features an entirely different landing page approach.

The corporate landing page features a lot of colour, more imagery and detailed information about Invesco and their services. Invesco’s QQQ landing page is extremely minimal, using less colour except for a few highlights on buttons and links in the Invesco blue.

The copy on the corporate website is sparse and often links users to external sources. The QQQ page is written for ‘anyone’ to understand creating a more guided experience.

YouTube has seen a steady rise (+74%) in traffic generation for Invesco since December 2020. By February 2021, 55% of all Social traffic was driven by YouTube.

With 10.6k subscribers, Invesco launched a series called “Agents of Innovation” that feature everyday people being involved in major scientific and technological discoveries. These videos represent users’ investments in QQQ.

This series has amassed 8.5M views over five videos. Invesco spent $637K on these videos as part of their Display campaign in February 2021.

*99% of the ad spend is focused on the United States

Ads whose content focused on ‘investment for anyone’ landed on pages directed at helping and guiding an audience that may not have previous knowledge in finance.

Invesco has built their pages to be accessible to anyone. They’ve created an educational platform that explains their offering through videos called “ETF 101”.

Invesco also easily offers a Fact Sheet and QQQ Prospectus for transparency up-front. This way a user can learn about what ETFs are and invest in them all on one platform.

In March 2021, Invesco launched a landing page and augmented reality (AR) game called QQQ Hoops with basketball player Grant Hill. The game promotes their partnership as the NCAA’s Official ETF. Invesco spent $96K on ads across Facebook, Twitter and Display for the game.

When playing the game on your Desktop, they ask you to complete a quick survey asking if you are:

To support the launch of the QQQ Hoops game, they created a landing page that speaks to basketball fans. It takes users on a journey of understanding the ‘Innovation Behind the Game’.