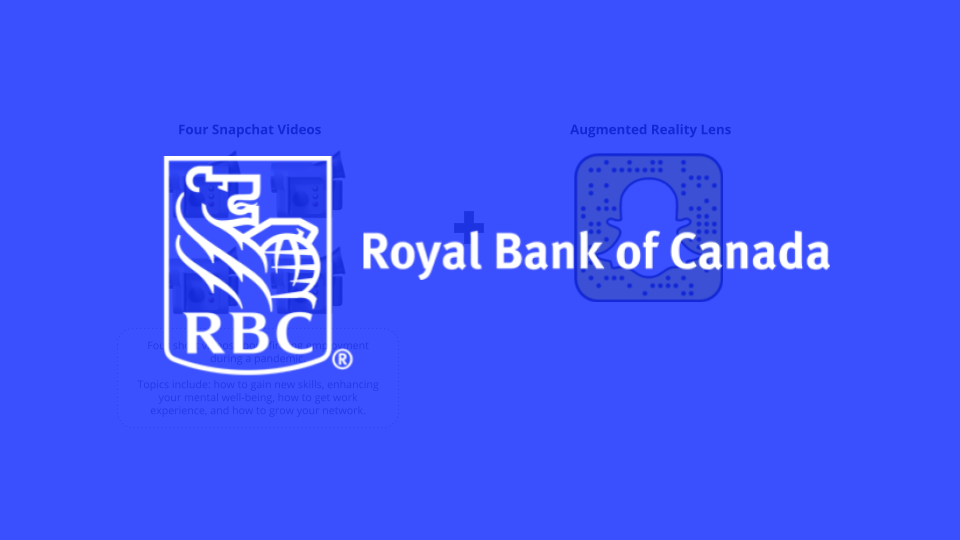 Organic & Paid  Social Tactic — Create Educational Content: RBC produced four videos on Snapchat with educational content that covered four topics: gaining new skills, work experience, networking, and mental well-being. Viewers are more likely to watch videos where they can learn a new skill, which can help increase the view through rate for your video content. Providing these services allows RBC to develop a long-term relationship with the younger demographic.

RBC introduced a Q&A format into their educational videos, which made the video seem more engaging and less like an instructional video. Be creative in the way you introduce education to your viewers!

Influencer Tactic — Partner Up with Community Leaders: When posting educational content, viewers are looking for people that are experts in various topics. RBC strategically chose community leaders and entrepreneurs who have made a direct impact on society to educate students about gaining new skills and work experience.

Reach out to micro influencers in your community who have shown that they are experts in their field and have influence on their audience and local community.

Paid  Social Tactic — Experiment with New Platforms: When launching ads in new platforms such as Snapchat, take advantage of their unique features rather than simply repurposing content from other social media channels. For example, RBC created four augmented reality lenses to support their campaign, which is a feature that is unique to Snapchat.

In December 2020, RBC announced that they are partnering up with Snapchat for their Future Launch at Home youth campaign.

Future Launch at Home is an online version of their youth program, which provides resources for skill development, networking, work experience, and mental well-being.

There are three main types of Snapchat ads:

RBC currently has 16 snapchat lenses dating back to 2017 for Canada’s 150th year anniversary.

Specifically for the Future Launch campaign, RBC created one Snapchat lense for each episode. All lenses included an “RBC Future Launch” logo for brand awareness.

RBC currently has four episodes uploaded on Snapchat, which is a part of their “Building Confidence” series for the Future Launch at Home program.

For each episode, the host interviewed a Future Launch participant and answered commonly asked questions in a Q&A style format.