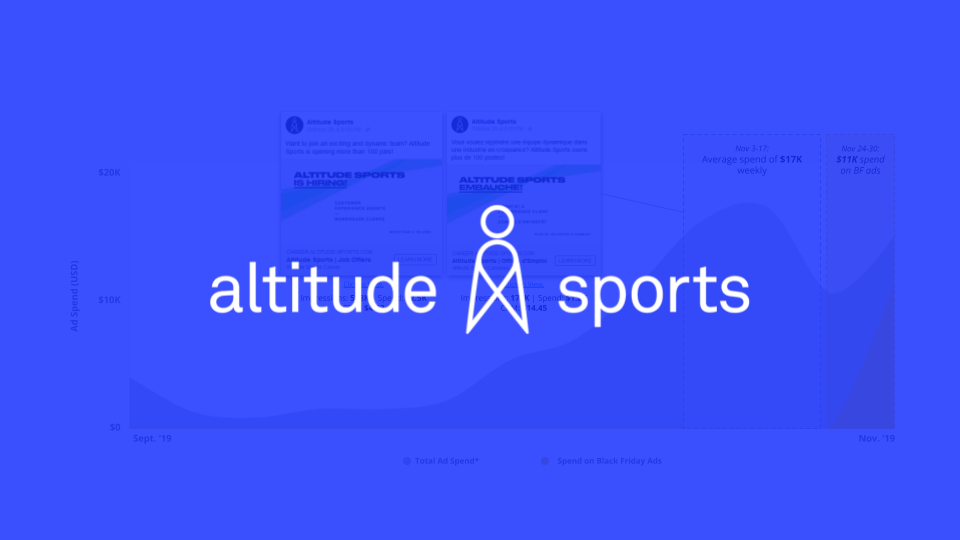 Ad Tactic — Use Facebook Events to promote sales: Atmosphere create a Facebook event for the Black Friday sale; not only does it work in a similar way to a standard Facebook ad (customizable creatives and captions), it also has the added feature of sending reminders to attendees. Customers who click “attending” generally receive auto-generated notifications from Facebook that they have an upcoming event at least the day of and the day prior to the event. Rather than hoping customers remember seeing their promotions, Atmosphere ensures that customers are do not forget.

Ad Tactic — Drive in-store traffic with Facebook ads: Although SAIL’s Black Friday promotions were run both in-store and online, they decided to add an extra in-store promotion for their Ottawa customers. They ran a campaign that gave the first 250 customers to visit their store up to $500 in rebates. The Facebook ad linked to their store locations and holiday hours. While online sales are important, in-store experience allows customers to touch, feel, and see the items they want to purchase, creating a tactile experience that is impossible to replicate online.
‍
Paid Ads Focus Allocation — Black Friday Ads not a spending focus: Aside from SAIL, who spent 40% of the November ad budget on Black Friday ads, the other brands only dedicated 8-26% of their November ad budgets on Black Friday ads. Even with SAIL, their Black Friday spend paled in comparison to their earlier End-of-Season sale from September ($157K on September vs. $27K in November), highlighting a whitespace opportunity.

In November 2019, all competitors increased their ad spend compared to the previous month, with Altitude Sports and SAIL increasing their ad budgets by the largest percentage (+131% and +101% respectively).

Although Altitude Sports greatly increased their ad spending in November, the majority of their budget was spent on non-Black Friday promotions—such as their job hiring ads.

On top of their regular Black Friday promotions, Altitude Sports also ran a special promotion exclusive to their members only.

Atmosphere increased their ad spend in November by +58% MoM; however, the majority of that spend was spent in the early weeks of November, with ad spend dropping slightly near Black Friday.

Atmosphere ran a series of sales prior to Black Friday, including a 50% off sale and a Friends & Family (60% sale) that concluded days before Black Friday started.

Atmosphere advertised their Black Friday event prior to the actual sale by creating a Facebook Event page as well as promoting their flyer.

Decathlon increased their ad budget by +94% in November but, similar to Atmosphere, the majority of the spend was focused on non-Black Friday promotions.

Decathlon created a series of display ads focused on showcasing their broad range of products that span several different physical activities, from hiking to tennis to snorkeling. They also promoted the opening of their Centre Eaton location in Montreal.

Decathlon spent the least amount on Black Friday ads out of all competitors, running only a handful of low-cost Facebook and display ads.

Of all the competitors, SAIL spent the largest percentage of the ad budget on Black Friday ads at 40% for the month of November. They also increased their overall ad budget by +101% MoM.

However, their ad spend is -83% less than their spend in September, when they ran their end-of-season and manufacturer’s clearance sale.

SAIL started building hype and awareness around their Black Friday sales by having their promotions start on Nov. 13th rather than on Black Friday. They also pushed for in-store sales and traffic through Facebook ads.

Compared to other competitors, Sport Chek only increased their ad spend slightly in November, +34% compared to October. However, almost 100% of their ad spend during the last week of November was spent on Black Friday ads.

Although Sport Chek used different ad formats for their Black Friday sale, the sales messaging and creative remained largely the same across all formats.