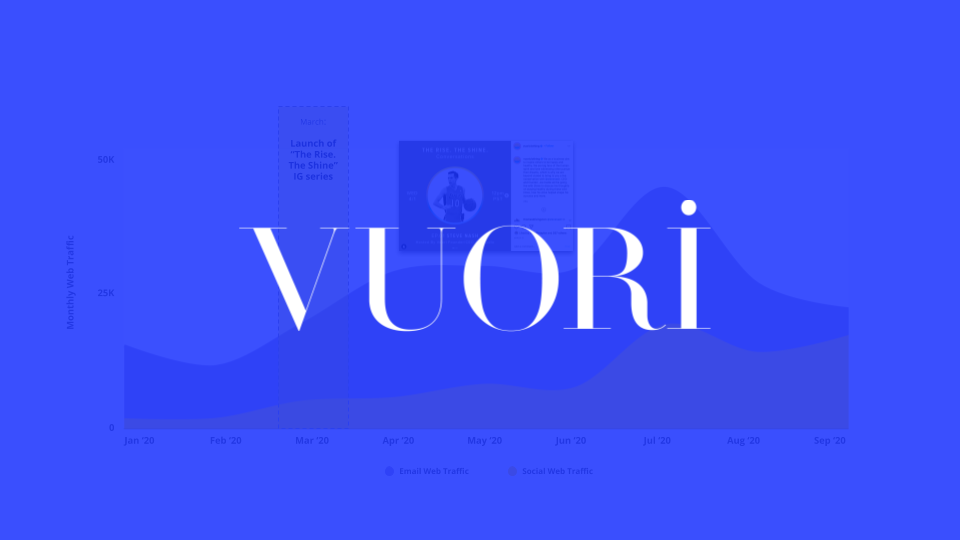 Increasing Traffic and Social Following By Activating a Podcast Across Channels

Social Tactic — Instagram Live Series: Vuori’s “The Rise. The Shine.” series featured prominent athletes to discuss various on-brand topics in an interview format. Rather than creating a new channel and/or platform for this (i.e. via podcast, YouTube Channel, etc.), Vuori focused on their existing and strongest platform, Instagram, to host these episodes in a native format. This provided the new series a substantial starting point while further accelerating follower growth on Vuori’s Instagram account. The platform may have also rewarded Vuori for utilizing a native feature. It can be tempting to branch out into untapped digital channels to reach the audience, but consider which platforms will truly be best suited for an activation given its programming and leverage existing earned audiences when relevant.

Cross-Channel Tactic — Support Social Activations Across Channels: Not only did Vuori use all their available social accounts to promote “The Rise. The Shine.”, but they also regularly promoted new episodes to their email list. Emails promoting TRTS performed considerably better than the average for Vuori’s email program, achieving both a) nurturing list members with non-promotional and valuable content and b) promoting & supporting an activation on social to drive reengagement.
‍
Email Acquisition Tactic — Strong Incentive to Sign Up: In addition to launching their “The Rise. The Shine.” series and promoting it to their email list, Vuori also ramped up email acquisition efforts in 2020 by offering “20% Off Your First Purchase” for new email subscribers in, which is significantly higher than the 10% discount offered by most eCommerce brands. Once Vuori began offering a 20% order discount to new email subscribers, Vuori’s email list grew very significantly (+35%) between May and June, adding just over 40K new subscribers. Naturally, any brand considering a strong email acquisition should be very aware of their customer LTV and the payback period of such an offer, but Vuori’s example (and execution) illustrates that this tactic works.

Since March, Vuori has seen a steady rise in web traffic, peaking in July.

Increases to Email & Social-driven traffic are the main drivers of Vuori’s overall traffic increase in 2020.

In March, Vuori launched their “The Rise. The Shine.” Instagram live series where they bring on prominent guests to speak with founder Joe Kudla.

The first episode, which featured athlete Steve Nash, was cross-promoted across a variety of channels including Instagram, Facebook, and email.

Vuori continuously cross-promoted “The Rise. The Shine” series via email throughout 2020, with these emails generally performing better than their read rate average of 26%.

In addition to launching their “The Rise. The Shine.” series, Vuori also ramped up email acquisition efforts in 2020 by offering “20% Off Your First Purchase” for new email subscribers in, which is significantly higher than the 10% discount offered by most eCommerce brands.

None of Vuori’s digital ads from March - June 2020 featured “The Rise. The Shine.” or any email acquisition efforts, representing a possible missed opportunity to further build upon the cross channel success of the activation.