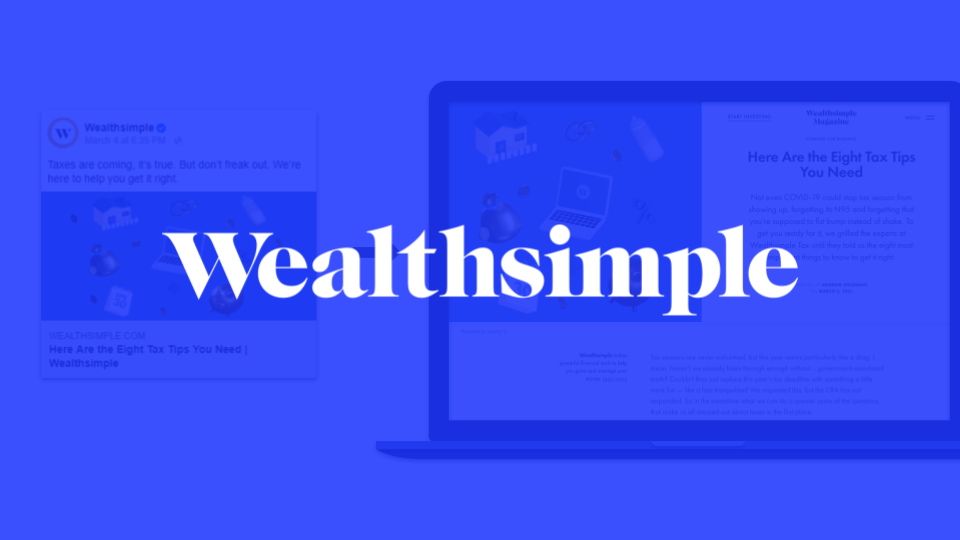 Content & Messaging — The Power of Narrative Advertising: Wealthsimple told a compelling story featuring Frankenstein as the main protagonist, who is an easily recognizable figure amongst people from different generations. The ad showed the protagonist confronting various comedic dilemmas as he filed his taxes, which resonated with viewers who loved Wealthsimple’s sense of humor. Storytelling helps increase ad recall as viewers are more likely to remember an ad with a strong narrative rather than an ad that is simply focused on product benefits.

Paid Social Tactic — Multi-Language Advertising: On Facebook, Wealthsimple ran ads in multiple different languages such as English, Chinese, French and Punjabi. Multi-language ads are a great way to reach different audiences as there may be less competition and they are an effective way to personalize ads for non-English speaking consumers.

Paid Social Tactic — Giveaways: To increase customer acquisition for Wealthsimple Tax, the brand launched a giveaway ad on Facebook for a “1 in 15 chance to double your refund.” Users received a personalized referral link that they could share with their friends.

In February 2021, Wealthsimple launched a new campaign to advertise their “Wealthsimple Tax” software.

Wealthsimple increased their monthly ad spend by +172% in March 2021 to promote Wealthsimple Tax. This increase was driven by Facebook and YouTube.

Wealthsimple increased their ad spend budget during tax season (February to April) by +431% YoY in 2021.

The top display ad for the Wealthsimple Tax campaign posed a question to the audience about CERB payments and was featured primarily on YouTube and Buzzfeed.

This leaderboard ad represents 71% of the total display ad spend for the Wealthsimple Tax campaign.

Display ads call out Wealthsimple’s “pay what you want” structure where advanced taxpayers can use the software for free.

Wealthsimple launched a YouTube campaign featuring easily recognizable characters such as Frankenstein. Within the first 3 seconds of the ad, Frankenstein is seen filing his taxes and trying to answer the question: “Are you filing for a deceased person?”. As the story unfolds, Frankenstein is seen trying to find his pulse and reading a book called “the Vanity of Existence” as he tries to figure out if he is in fact, dead or alive. The YouTube ad ends with their slogan “anyone can do their taxes”, as Wealthsimple Tax was founded on the belief that doing your taxes shouldn’t be intimidating or expensive.

The Frankenstein ad received high engagement as viewers expressed their love for the main character, sense of humour and creative storytelling.

As part of the same YouTube ad campaign, there were two other videos featuring Medusa and Noah’s Ark. All three videos were seen during the 2021 Super Bowl event.

On Facebook, Wealthsimple ran the same advertisement in different languages such as English, Chinese, French and Punjabi. Chinese ads received the second highest spend, after English.

To increase customer acquisition for Wealthsimple Tax, the brand launched a giveaway ad on Facebook for a “1 in 15 chance to double your refund.”

How to enter? Share your referral link with your friends, and when they file their taxes with Wealthsimple Tax, you will both be entered to win.‍

Wealthsimple directly compares their tax software against other brands and highlights the fact that they offer personalized tax tips and maximum refunds.

Wealthsimple implemented an A/B test for this campaign, where they tested between two different creative versions and headlines.

WINNER: Creative A had a CPM that was 4% lower than Creative B

Wealthsimple ran ads that aimed to educate their consumers. This Facebook ad directed users to a blog article where readers could learn eight tax tips.

However, all other Facebook ads directed users to the main Wealthsimple Tax landing page, where the main CTA button was “Start your 2020 tax return”.