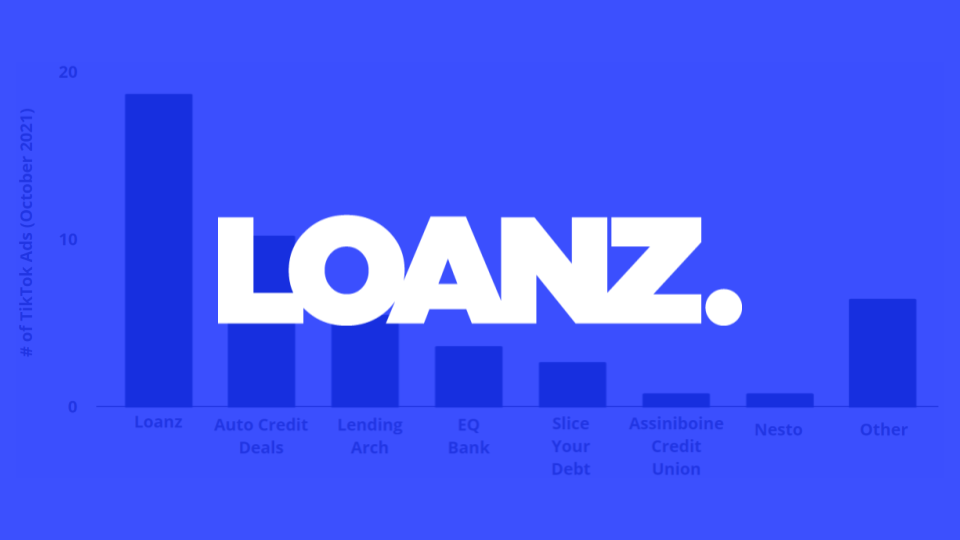 How Loanz Increased Site Traffic by +209% With TikTok Ads

In October 2021, 53 Financial Services TikTok ads were running in Canada. Loanz was the top advertiser with 20 ads in one month while EQ Bank and Assiniboine Credit Union were the only financial institutions who ran TikTok ads. Best practices for TikTok ads include:

In October 2021, 53 Financial Services TikTok ads were running in Canada. Loanz was the top advertiser with 20 ads in one month while EQ Bank and Assiniboine Credit Union were the only financial institutions who ran TikTok ads.

The campaign aimed to advertise EQ Bank’s unique value propositions such as no monthly fees, high interest rates, and no minimum balance required.

No Minimum Balance Required. This ad is using a very popular TikTok sound where Justin Bieber is saying “immediately no” multiple times. This sound indicates that the preceding clip is being played in an ironic or sarcastic context.

Assiniboine Credit Union’s TikTok campaign had a traffic objective and consisted of only one ad which generated 399 engagements in total (avg. video duration: 11s).

The campaign aimed to highlight the credit union’s involvement in helping the community, and saving the planet.

Make the switch, for good. Assiniboine ran a TikTok ad in the form of a slideshow of various images. At the end of the ad, Assiniboine includes the Certified B Corporation logo which highlights their commitment to corporate social responsibility and their environmental and social investments.

Loanz’s TikTok campaign had a conversion objective and consisted of 20 ads which generated 13K engagements in total and drove +209% Monthly Site Visits (vs. prev. month).

Every ad that Loanz ran on TikTok was a collaboration with an influencer.

How did you get $15,000?!? A popular TikTok trend is to respond to a user’s comment with a video response. The comment appears as a sticker which is embedded into the video in a Q&A style format.

App Demo. In this TikTok ad, Loanz partnered up with a TikTok influencer to show a demo of the app and highlighted how users can receive money on the same day they qualify for the loan.

Text Notifications. To get viewer’s attention, Loanz worked with an influencer to provide proof of how she received a $15K loan by showing her audience a screenshot of her texts showing an INTERAC e-Transfer.

The video frame featuring the “swipe left” CTA at the end of the TikTok advertisement received the highest CTR.

Video ads that show a demo of the Loanz app & website for the entire duration of the advertisement saw spikes in CTR during multiple points of the video. Ads that did not feature a demo typically saw a spike in CTR only at the end of the video when a call-to-action appeared.