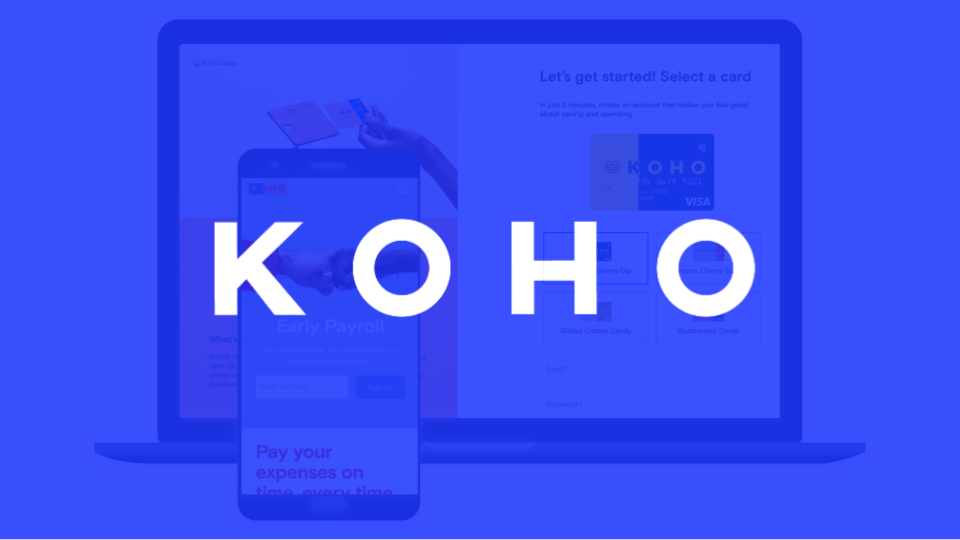 How KOHO Grew Android App Downloads by +86% in One Month

Paid Social Focus — Facebook: KOHO chose to invest all of its advertising budget dedicated to building awareness of the Early Payroll feature into Facebook ads. The fintech company remained consistent with the ad visuals and leveraged a single video across its Facebook ads and own websites. However, KOHO tested different ad messages. The results of KOHO’s A/B test shows that the ad copy that precisely appealed to users’ pain points — late bill payments and interest fees — was more effective and resulted in a lower CPM. Since July 2020, KOHO allocated 23% of its digital advertising budget to promote the Early Payroll service. The majority of the ads (79%) were directed to the brand’s Facebook page to invite the prospect to learn more about the company. The remaining 21% led to the KOHO’s apps on Apple and Google Play stores.

Paid Search — Drive Search Traffic to Conversion-Oriented and Informational Pages: KOHO also leverage the paid search channel to capture relevant traffic and inform users about the Early Payroll service. The fintech company targeted those searching for “payday”, “loan”, “advance”, including phrases with these keywords. KOHO spent at least $49K since July 2020 on the paid search channel. Ads targeting the “payday” keyword brought the most traffic to the website (~6.2K visits).

KOHO is a challenger fintech company based in Toronto, Canada. The brand provides customer-centric financial services from Savings Account to Early Payroll.

KOHO is on a mission “to create financial products that are open, intuitive, and designed to help you live a better life”. KOHO clients need to download either the iOS or Android app to use the services.

In July 2020, KOHO launched a free Early Payroll feature. This service allows clients to access $100 three days before the paycheck. Initially, the service was available only to CERB* recipients, but later on, the company expanded the service  to all clients who set up payroll direct deposits to their KOHO account.

For an extra $5 customers can borrow $100 from their payroll as early as 15 days before their paycheque.

KOHO allocated 23% of its digital advertising budget to drive awareness to the Early Payroll service that was launched in July 2020.

The company maximized its Early Payroll advertising in October of 2020, when all of its monthly ad budget ($18K) was invested to promote the newly launched service.

79% of Early Payroll ads directed users to KOHO’s Facebook page, while the rest led users directly to the company’s app on Apple Store (20%) and Google Play (1%).

KOHO leveraged a variety of keywords to capture relevant traffic. The brand spent at least $49K to target traffic searching for “payday”, “loan” and “advance”, including different phrase variations with these keywords.

KOHO aimed to raise awareness with the help of PR activities — 5 digital media publications covered the launch in July citing the CEO rationale and timeliness of the Early Payroll feature launch.

In 2020, website traffic to koho.ca increased by 13% from 2019. However, it could rather be described as a stable month-on-month growth rather than a spike triggered by the Early Payroll service launch.

Most (65%) of the Early Payroll page visits are driven by internal referrals, meaning that users came from another page on KOHO's website (.../homepage, /company … etc).

Since the launch of the service in July 2020, KOHO has prioritized the Early Payroll section to the secondary focus on the homepage. The Early Payroll banner was replaced by the KOHO Save promo that was launched in February 2021.

KOHO mobile app downloads saw a significant spike in the month of July when the financial institution introduced the Early Payroll feature. 45K Android users downloaded the app in July, which is +86% more than the previous month.

The Early Payroll feature also had a positive impact on the growth of average active daily users (DAU) of the Android app.

KOHO Android App saw a +29% increase in DAU in the next three months (Aug-Oct)* following the Early Payroll feature launch.