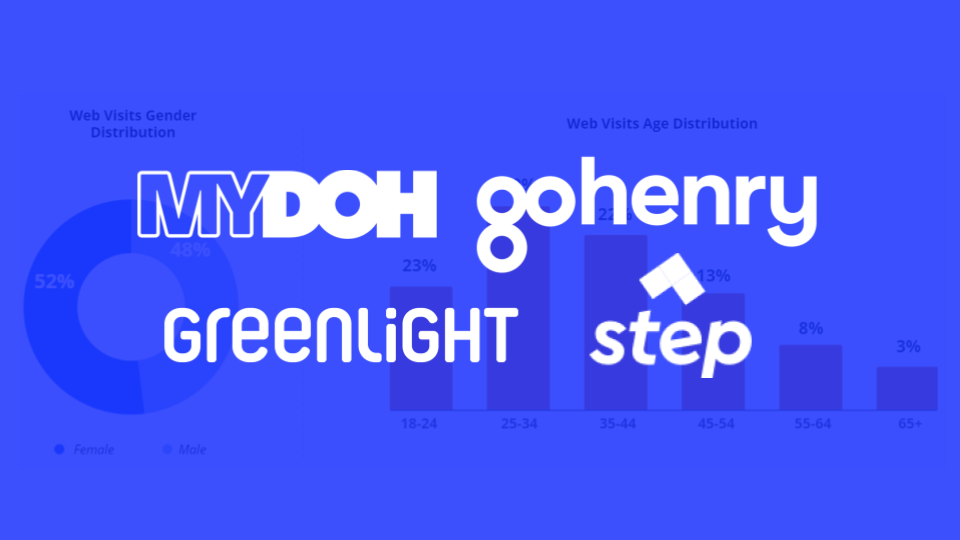 The family banking category saw a +143% increase in web traffic from 2019 to 2021, with more new entrants joining the category:

In this case study, we looked at the following six fintech companies providing family banking services to 13-18-year-olds and their parents:

Family banking website traffic tends to be slightly skewed towards female visitors (52%) and a fairly young demographic — 30% of visitors are between 25 to 34 years old.

The category saw a 4X increase in digital ad spending from 2019 to 2020. The spike was driven by increased advertising investment by Greenlight (+498% vs. 2019). Additionally, both Step and Jassby started to run digital ads in 2020.

Family banking services tend to increase their advertising spend before the school year (July—August) and during the Holidays season (December — January).

However, looking into year on year change in advertising spend, GoHenry significantly increased its advertising budget, from $211K in 2020 to $3.5M in 2021.

Companies in the competitive set tend to rely on Facebook and Instagram to run ads and build brand awareness.

Most of the companies aim to appeal to parents in the ad messaging and only Step and Jassby run advertisements targeted at teenagers.

Looking into demo targeting, the brands primarily target female audiences and only Mydoh has an equal targeting audience split.

Family-oriented fintech companies appeal to different notations when advertising to parents and teenagers:

To Parents - When crafting advertising messaging to parents, brands in the competitive set emphasize the value of teaching kids to understand the ethics of work (chores), independence, and making sound money judgments. The brands also stress that there are no fees and parents will have control over their children's spending.

To Teens - When talking to teenagers, brands appeal to the notion that banking is not only for adults, and teens can easily send and receive money from peers. Some brands also ran ads to draw teens’ attention to giveaways where kids can win Xbox and Roblox Gift Cards for opening an account.

“Teach” is the most used call to action in family banking ads. The brands in the competitive set also frequently speak about “chores”, “allowance” and “spending” in their messaging.

All companies invest in messaging revolving around the notion of chores and promise to make chores more exciting for the teens.

Another important communication point is allowance. The brands promise to help teach teens about managing their allowance and enable parents to set up automatic payments to kids’ accounts.

Another popular tactic especially favored by Greenlight is using parents’ quotes in their ads. Almost half (49%) of all Greenlight's ads come in the form of a quote.

A promise to teach kids money basics is also a popular communication message leveraged by the teen banking apps.

Brands in the competitive set increase their advertising spending right before the beginning of a school year and Holiday season.

Brands aim to convince parents to use their apps by emphasizing that their family accounts don’t have any fees.

One more important feature that is advertised is to assure parents that they can gain control over their children's spending.

In addition to emphasizing the benefits of using teen banking apps, these services also aim to build credibility by communicating that 92% of parents say their kids are better with money after using the app or highlighting that they received 15K 5-star reviews.

Only two companies target their ads at kids — Step and Jassby. Step spends the majority (77%) of its total advertising budget to target teens, whereas Jassby invested only 7% ($9K) to advertise to teens.

Step attempts to build excitement amongst teenagers (more here) by encouraging them to sign up for their first bank account.

Step appeals to the need of teenagers to send and receive money and suggests its service as an easy way to do money transfers with parents and peers.

Jassby grabs teens’ attention with promos with prizes such as Xbox and Roblox gift cards giveaways; Step ran a promo promising a $50 deposit for active accounts.

Looking into total app downloads, Step app has been installed more than 4.2M times and Greenlight 3.8M between October 2019 and October 2021.

However, looking at monthly active users (MAU), more families actively use Greenlight compared to Step despite the lower number of total downloads.