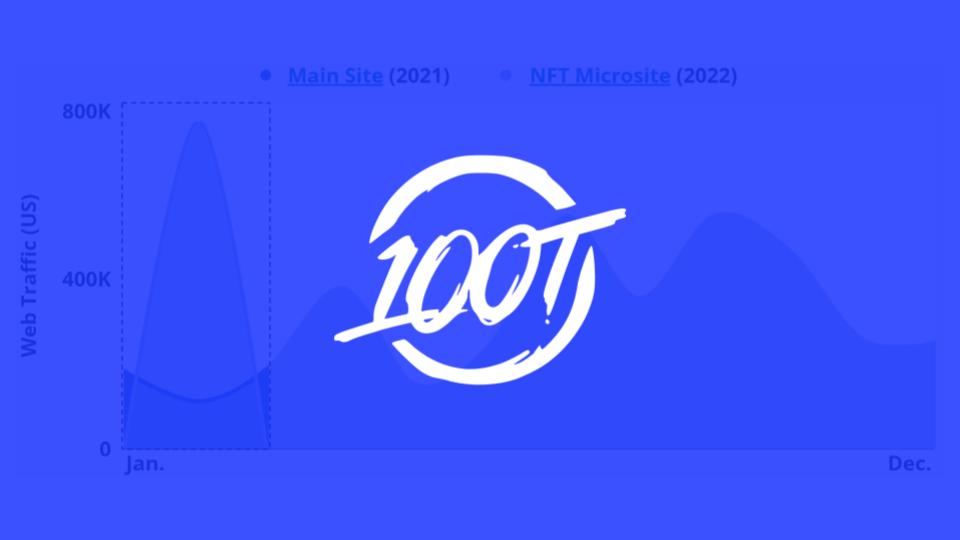 TAKE WHAT'S NOT GIVEN.

A championship isn't just for our players to celebrate.

You believed in us.
You cheered alongside us.
We have a special gift for you.

A commemorative digital 100 Thieves championship chain. Available now for free for everyone.

In February 2022, 100T announced a free giveaway of a one-for-one replica given to fans for free, in form of a digital collectible. Available for only 24 hours.

“Digital collectible” specifically meaning a form of crypto-currency called Non-fungible-tokens, or commonly referred to as an NFT.

The NFT Microsite traffic showed a 55% increase when compared to a their main site’s yearly average in 2021, totalling 726K sessions, respectively. From 2021’s highest point, it was a 21% increase in traffic.

100T often promotes limited time merchandise releases, therefore an average was taken over an entire year, and from the highest point.

For this giveaway, 31% of the microsite’s traffic was generated from Social Channels and 60% direct. 100Thieves’ Twitter uses their team members social media presence as support for giveaways such as this.

As a reference, Social Channels comprised 17% of web traffic through 2021, with Twitter being 66% of that traffic on their main site but generating 83% of traffic on the NFT Microsite. Therefore promoting this free giveaway through an already highly engaged channel, lead to fast distribution.

To ease the process, 100Thieves took care of the main actions any user must take when purchasing an NFT by adding links directly to the microsite.

Within the microsite, 51% of the total traffic is considered duplicated. However, this is likely users switching from mobile to desktop in order to claim their copy.

A key theme noted by each of these articles is the community focused and free aspect of the giveaway.