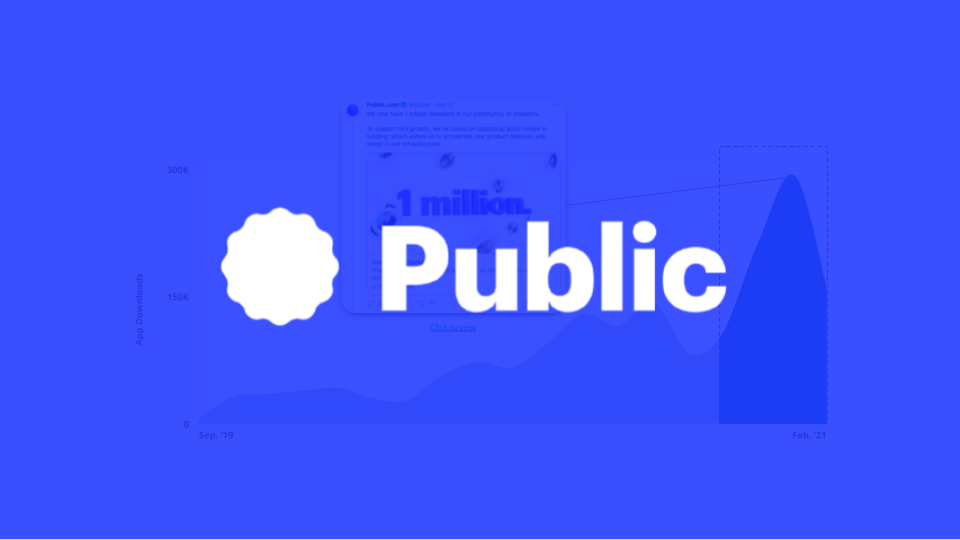 Brand Awareness & Positioning — Quick & Flexible: In February of 2021, Public’s web traffic increased by +2,301% YoY and app downloads increased by +732% YoY. These increases are the result of Public quickly capitalizing on current events and shifting consumer needs using the following tactics:

Brand Positioning — Topical Differentiation: The Robinhood/GME scandal brought the concept of Payment for Order Flow to the forefront of consumer’s attention, with the term seeing a massive spike in search interest in late January/early February. Public recognized the negative connotations around this type of practice and announced that they were going to be eliminating the practice. Public’s announcement tweet for the change garnered 5X the average engagement. By making this alteration to their platform, Public further positioned their brand as a better alternative to Robinhood. Also, by making a quick change, Public was able to capitalize on the increase in search interest and further the impact of their decision.

Over the past year, search interest for the term “investing” has increased by +38% YoY.

Many attribute this increased interest in investing to the “rise of the retail investor” and the “democratisation of finance.”

The search interest for the term “investing” spiked in Jan. and Feb. of 2021 during the media frenzy around GME and the significant rise in bitcoin’s value.

Average YoY increase in search interest of +68% from Jan-Feb.

The number of articles including the phrase “retail investor” in their title also increased significantly above the yearly average in January and February of 2021.

During this time, Robinhood angered users as the platform halted trades due to a sudden increase in collateral needs.

The halt prompted numerous class-action lawsuits and caused users of Robinhood to look for alternatives.

The search interest for the term “delete robinhood” increased by an average of +527% MoM in January.

Public capitalized on the heightened interest in investing during this time and the large number of Robinhood users who were looking for a new platform.

Outside of direct, web traffic growth was driven by significant YoY increases in organic search, paid search, and social traffic.

Branded keywords drove the majority of Public’s organic search traffic from Jan. to Feb. ‘21, with many of the non-branded keywords linking to their learn section.

Public built out blog articles that were optimized for keywords that had seen a recent spike in search interest to help boost their organic search traffic.

Relative search interest for the keyword “good faith violation” increased by 50% MoM in January of 2021.

Public focused many of its non-branded paid keywords on terms that were topical in Jan. & Feb., such as “short stocks” or “payment for order flow.”

Public also created search ads targeted at those looking to leave Robinhood. The ads included differing copy and linked to a mobile-optimized landing page where they emphasized the quickness and ease of transferring an investment account to Public.

Twitter drove the majority of Public’s desktop social traffic from Jan. to Feb. ‘21. The highest engaged tweets during the period focused on transferring accounts to Public, free stock slices, and the announcement of stopping the practice of Payment for Order Flow.

Public’s “break up with your brokerage” tweet received 9X the average number of engagements. The video involved Michael Bolton singing an altered rendition of his song “How Am I Supposed to Live Without Out You” (instead, “how am I supposed to trade without you”). The landing page incorporated two CTAs for visitors to either transfer their account or download the app.