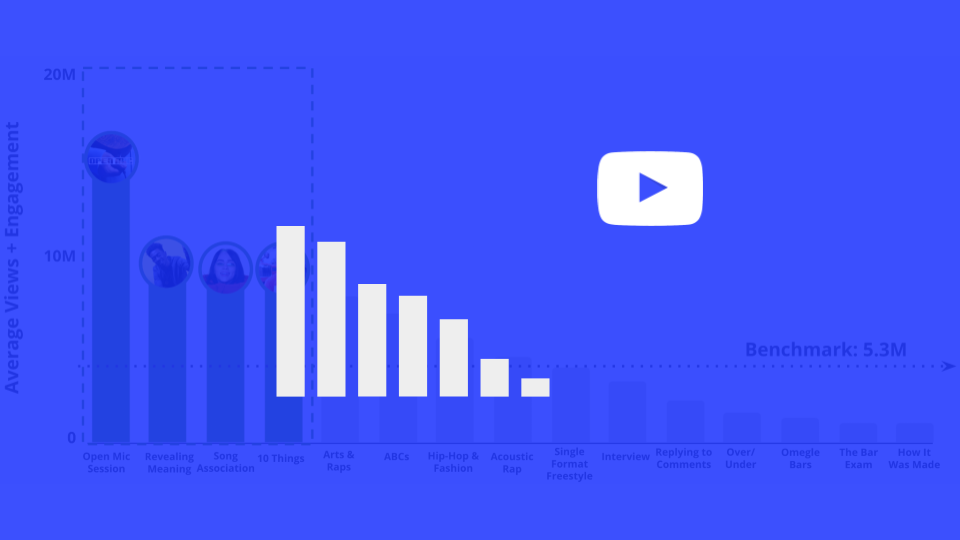 Content buckets that had the highest average views & engagement in the USA hip-hop space include:

Rap Battles are a viral segment with an average of 19M views and engagements due to Wild ‘N Out’s success. This video has led to higher averages in the segment with 50M views.

Freshman Cyphers are a viral segment with an average of 17M views and engagements. Due to its consistent nature, XXL’s Cyphers have become a recurring video that millions look forward to viewing. This video has led to higher averages in the segment with 36M views.

The following viral videos were omitted from the data set to avoid any skewing.

Open Mic Sessions are a video format that creates a space for artists to perform either with a live band or in a studio set-up.

Revealing Meaning is a video format that explores artists breaking down the meaning behind their lyrics and the stories that built them up.

Song Association is a format that explores an artists’ ability to think off the top of their head and find songs that use random words they’re given on the spot.

Content Opportunities: Build a format that challenges artists to think on their toes and provide insight into their lives without overtly asking them about it. This could take shape in the form of a game where one artist wears headphones and must react based on what they’re hearing while hosts rate how much they think the artist likes the song.

10 Things is a series hosted by GQ that invites rappers to share 10 things they don’t think they could live without.

‍Content Opportunities: With the rise of documentaries that explore not only the lives of rappers but their creative processes (like Travis Scott’s Look Mom I Can Fly and Kanye’s jeen-yuhs) there is a lack of content in this space that explores what artists need to make the songs we love so much today. Think 5 essentials in the studio, where an artist can really dig into the elements like their producer, their equipment and even the snacks they eat while making music.