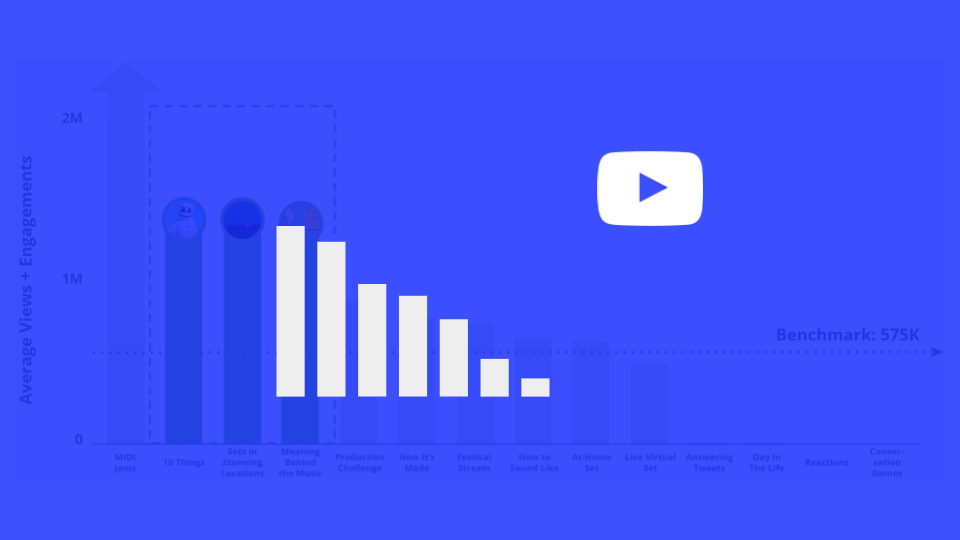 YouTuber and musician, Composerily, shared a series of impressive videos of him playing a MIDI Fighter 64 which generated an average of 2M views per video. In the video on the left, Composerily plays classical music on the MIDI by mapping out the notes across the buttons like a piano. On the right, Composerily plays a sample of his song Farewell and includes a link to the full version in the video's description.

10 Things is a series by GQ that invites artists to share 10 things they can’t live without. Videos featured Marshmello, Diplo, DJ Snake and Alok.

Stunning, high-production video content of DJ sets from around the world, filmed in breathtaking locations such as the south coast of Iceland, a beautiful mountain landscape in Gstaad, Switzerland and a sunset on the Brazilian coastline.

3. Meaning Behind the Music

Content:  This video was the live countdown for Insomniac’s Virtual Rave-A-Thon which featured a set by DJ Soda. In this premiered video, Deborah De Luca performed a live set in the Maradona stadium.

Tactics: Despite our return to live performances, live streaming isn’t going anywhere. Livestreaming has become an integral form of entertainment in the electronic space, and although live events and streaming hours have declined, there will always be a market for it. Continue to premiere live DJ sets to allow viewers to watch and experience the set together, similar to a live performance.  Livestreaming festivals is a great way to engage those who couldn't attend the festival, and spark interest for the following year's event.

Content: *As this video was a livestream, the content is now unavailable to view. The 12 hour stream was from the first day of Proximity’s “Digital Mirage: Online Music Festival” in April 2020.

Extreme Performing Opportunities are removed from the graph benchmark to avoid skewing the dataset.