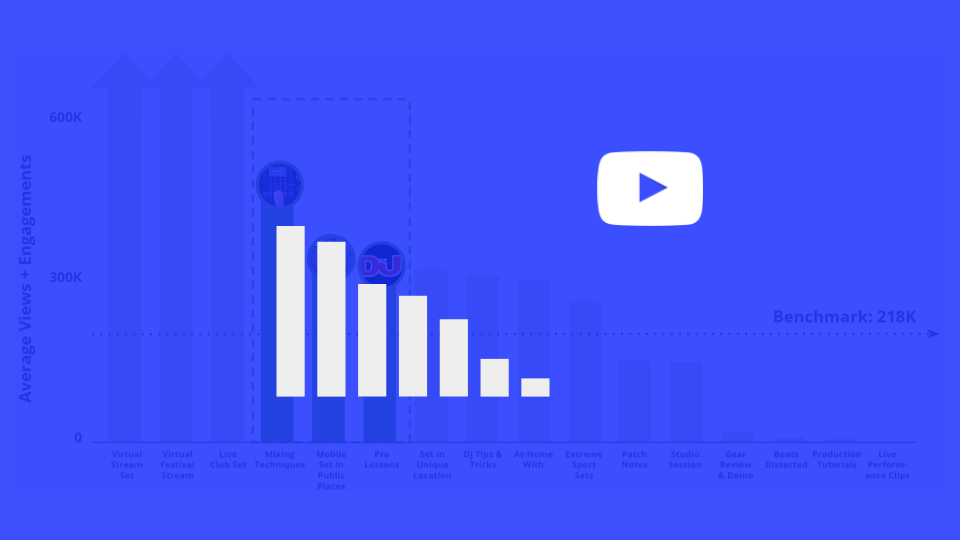 Content Opportunities: The virtual festivals mentioned above were fundraisers for charitable organizations. The videos featured a link in their descriptions, encouraging viewers to donate. Look for ways to pair stream sets with philanthropic efforts.

The top videos were from Ministry of Sound's 2020 Ministry Weekender; a two-day virtual party streamed live. The streams featured ten hour-long sets by leading artists such as Diplo and A-Trak.

Content Opportunities: Although the Ministry Weekender Virtual Festival was at the start of the COVID-19 pandemic, viewership for electronic live streams continues to grow. It offers a great way to engage with fans and provide highly valuable content. According to the IMS Business Report 2022, “there will always be a market for streaming to people who can’t get to a physical show.”

Popular "Live Performance Set" videos were published by MixMag and Boiler Room. Videos feature a full set by one artist or group performed in a club setting with a lively, engaged audience.

Content Opportunities: Boiler Room sessions are open dance floors, meaning there isn't a backstage area; instead, the artist is behind the decks, and attendees are behind them or interspersed around the table. The artist is always front and centre of the broadcast, and nothing separates them from the crowd. This allows DJs to mix with the crowd authentically and create a unique experience for everyone.

Content Opportunities: Share performance mixes filmed from the point of view of the DJ to showcase various mixing techniques. Use on-screen text to give additional details and pointers.

Content: Live sets streamed by Purple Disco Machine, Idris Elba, and Carl Cox. Two of the three viral videos were apart of The Opening Party by Defected Records which was sponsored by Heineken.

Set in a Unique Location

Content: To the left, Deborah De Luca performs a set in the striking location of Vele Di Scampia. On the right, Sub Focus x Wilkinson plays a set at Corfe Castle, Dorset. The performance was later premiered on YouTube.

Content: Mobile DJ - SUAT shared the following two videos, where he is challenged by security/police for attempting to play in public places.

Content: DJ Mag goes in the studio with David Guetta while he makes a simplified version of his song “Titanium” from scratch.

Content: Tutorials is a regular series by Attack Magazine where they respond to requests from viewers on music producing. In this viral video they broke down eight of the archetypical forms of dance music basslines.

Content: James Hartly takes viewers through the latest controllers such as the Pioneer DDJ-1000SRT, Pioneer DJ XDJ-XZ and Pioneer DJ CDJ-3000. He discusses all their new features and modifications and provides a demo and a review of the new equipment.

Content: The video on the right features Charlotte de Witte at MixMag’s “The Lab NYC”. The one on the left features Carl Cox and Fatboy Slim playing B2B.