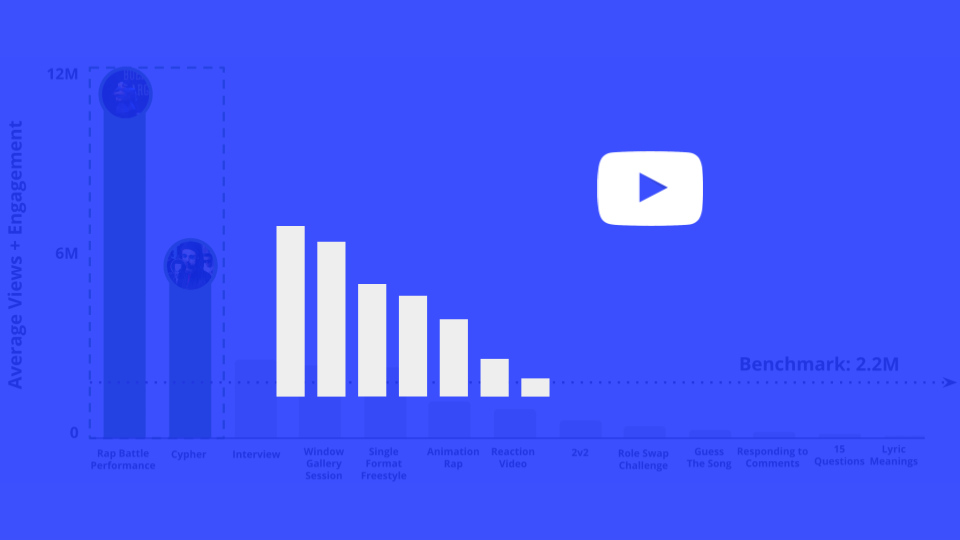 A performance style where artists pair up against each other to compete through freestyles in a series of segments in front of a live audience. The content category of Rap Battle Performances saw 3.4x more views and engagement than the YouTube benchmark at 11M.

Within one continuous song, three or more rappers take turns performing their verse until they pass it off to the next artist.

Interviews feature longer content where artists get a chance to sit down and connect with their interviewer and audience. Interviews provide a chance for the artist to offer insight into their lives.

Content Opportunities: This interview features Rosalia explaining her music in a long form feature. Create a studio space for artists to join a music expert on the Red Bull team to sit down and breakdown their lyrics and musical components together. This should be lighthearted and musically inclined to take viewers into the history of their favourite lyrics.

Artists perform their songs in a specially designed performance space with musical accompaniment of their choosing. This segment is owned by the outlet Gallery Sessions.

Single Format Freestyles feature videos that highlight one creator performing a freestyle in a performance format.

Viral Videos:These videos were omitted from their content buckets as ‘viral’ outliers for exceeding 3x the views and engagements of their respective benchmarks.

Length: Both the viral Animation Rap videos are 5 minutes in length.

Visual Style: These experiment with different visual styles than the creator usually produces. Instead of Minecraft/Roblox style characters, he experiments with flat illustration styles or graphics similar to the new Sonic style, which was made in line with the release of the new movie.

Length: Both the viral Interview videos range at about 15 minutes in length.

Content: The top replayed moment in this video features the guest breaking down how a song was made and how he incorporated different instruments into the production.

Tactics: The artist constantly makes eye contact and gestures to the camera. Footage of people through the vocal booth window is shown often to build behind the scenes content.

Tactics: This video features a top rapper from Spain who performs completely alone as opposed to with a DJ or band. He features a lot of emotion and direct contact with the camera.