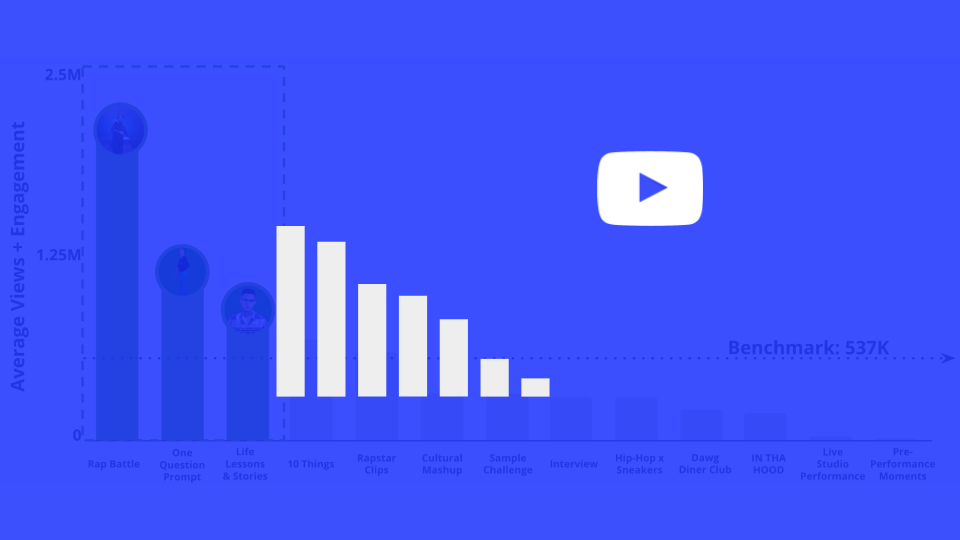 ‍The First Take is a Japanese video series in which artists get one shot at recording a song in a white studio with a microphone. During the one-shot, artists are instructed to treat the filming as a live performance. This segment averaged at 14M total views and engagements (26x more than the benchmark).

Content Opportunities: The one-take idea creates a sense of tension and excitement that comes usually when artists perform live. Audiences get to experience their talents and performances without any editing or do-overs.

Rap Battle videos feature various formats of MCs battling it out on a stage with freestyle raps, in which they boast, insult and play with words to see who has the best verses.

Content Opportunities: Rap battle videos were extremely popular within the competitive set, generating 52% of the total views and engagements. Consider hosting live rap battles, utilizing real-time features such as YouTube Premiere and sharing footage from the various rounds on your channel.

Short snippets from Neet’s interviews with artists sharing the lessons they've learned in life and other untold stories from their pasts. Top videos include DELTA 9 KID discussing his incarceration, SILENT KILLA JOINT’s sharing his worst trip and Tohji sharing cherished wisdom from his old roommate.

Content Opportunities: Hip-Hop (or more specifically, Gangsta Rap) has been closely associated with criminal behaviour and drug use since its inception, which is part of the genre’s allure. With Japan having one of the lowest crime rates in the world, the top videos offer fans a glimpse into this alternative lifestyle and provide insight behind their lyrics.

Fun interview clips asking artists questions about themselves and hip-hop.

Length:Viral rap battle videos range from 3 minutes to 29 minutes. The top two were the longest at 13 minutes and 29 minutes, respectively.

Video Series: 10 Things is a video series by GQ in which artists explain their top ten things they can’t live without.

‍Content: Top replayed moments include when the artist engaged with the items he was sharing as his essentials.

‍Break Up Content: The two viral Hip-Hop DNA PANEL videos were a two-part series from an interview with the rap group NAMEDARUMA (舐達麻).