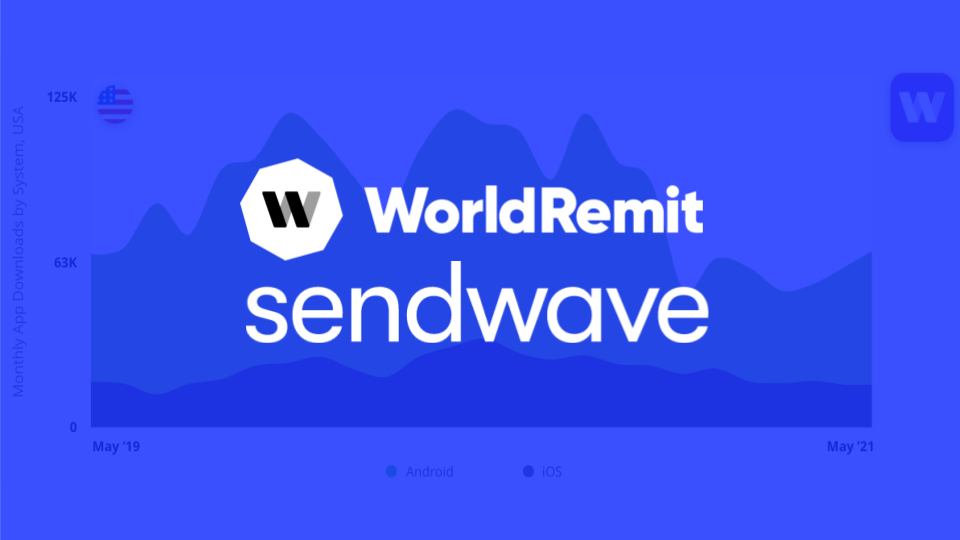 International money transfers (especially remittances) from the USA to Latin America, South Asia, Middle East and North Africa grew during the pandemic in 2020. The companies enabling people to send money abroad saw a significant increase in their website visits.

Strategy – Join Forces to Gain Competitive Advantage: In August 2020, WorldRemit announced that they will acquire Sendwave. Both companies have seen an influx in their app downloads in 2020 as well as a growing number of monthly average users. At the time when WorldRemit announced its acquisition plans, the app was generating 96K average downloads per month. While Sendwave’s monthly app downloads ranged between 32K – 34K, the company has established strong ties with the African countries — a growing remittances region.

Paid Ads – Aggressively Gain New Audiences: By joining forces, WorldRemit and Sendwave gain a geographical advantage over Wise and set themselves on the growth trajectory in the evolving markets. The companies have aggressively invested in the paid advertising in 2021, spending $6.9M to gain new users in the USA. Wise, at the same time invested $1.3M to advertise to the US audience with most of its budget being spent on Facebook ads.

2020 was marked by the spike in remittances from the US to Latin America, South Asia, Middle East and North Africa. The companies operating in this domain saw a significant YoY increase in website traffic  — Wise (formerly TransferWise) + 52%, WorldRemit +62%, Sendwave +51%.

In August 2020, WorldRemit, the international money transfer app, acquired Sendwave, another cross-border payment system with a strong focus on sending money from Northern America to Africa and Asia.

Joining forces, WorldRemit and Sendwave are looking to challenge Wise and establish domain leadership in the USA.

WorldRemit and Sendwave have a similar origin story and an empathetic tone of voice. The brands lead with a human-centric agenda, making a point that sending money overseas is a token of love.

WorldRemit relies on its mobile apps (available on iOS and Android) to send process money transfers. The average app downloads reach 94K per month in 2020, which then dropped to 58K in 2021.

The majority of app downloads come from Android users.

Despite the decline in monthly downloads, WorldRemit maintained a  stable number of daily users that reached the all-time high of 265K in May 2021.

In August 2020 WorldRemit announced that they will acquire Sendwave.

Sendwave was launched with a strong emphasis on sending money to Africa and Asia from Northern America. Founded in 2014, the company saw a +51% increase in worldwide website traffic and +7%  from the US during the pandemic.

Similar to WorldRemit, Sendwave has consumer-facing iOS and Android apps, which maintained an average download count of 32K per month. The company saw a 46% decline in downloads going into 2021.

Despite a decline in monthly downloads, WorldRemit maintained a stable number of monthly average users that reached the all-time high of 140K in May 2021.

By acquiring Sendwave, WorldRemit taps into growing markets and gains a geographical advantage.

Combined WorldRemit and Sendwave outperform Wise in the USA in terms of website visits. However, Wise has recently been getting more traction and saw its traffic reach an all-time high with 4M visits in March 2021.

When it comes to app downloads, WorldRemit and Sendwave significantly outperform Wise in the US — users download the apps of recently joined companies on average 176K per month in 2021, which is 3.6 times more than Wise’s apps.

Even though app downloads for all companies saw a decline in 2021, the average number of monthly active users has been increasing in Q2 2021 for all three brands.

WorldRemit and Sendwave aggressively leverage paid advertising to capture market share in the USA. The company invested $6.9M in digital advertising during the first 5 months of 2021. Wise spent $1.3M on online ads during the same time period (Jan. – May '21).

Both WorldRemit and Wise invest most of their advertising dollars in Facebook. However, WorldRemit has a more diversified digital advertising approach. The company also runs display and video ads as well as promotes its services on Instagram.