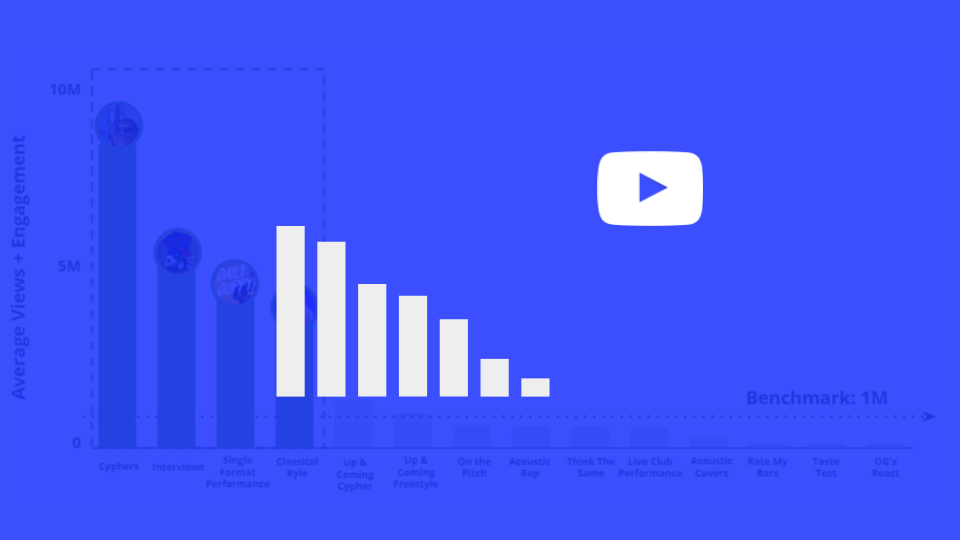 Content buckets that had the highest average views & engagement in the UK hip-hop space include:

Cyphers are video formats featuring freestyles and performances with rappers in a collaboration of two people or more.

Content Opportunities: The cypher that generated 90% of the total views in this category is Plugged In w/ Fumez. The participating rappers all wear masks and rotate around the mic to perform.

Interviews are video formats featuring artists who participate in conversations for their fan base to get to know them on a deeper level.

Single format performances are video formats featuring freestyles and performances by a single artist live or in studio.

Content Opportunities: Series like Fire in the Booth, Plugged In and Tiffany Calver Freestyle all have memorable hosts behind the videos. These hosts create strong introductions for their guests and build anticipation for the audience through intense audios and strong personalities.

“Classical Kyle” is a video format featuring a classical music specialist sitting down and discussing the meaning of specific bars from artists.

Content Opportunities: Top performing videos in this segment are about 9-10 minutes long. They represent an opportunity to explore the boundaries of what’s already common in the hip-hop industry and combine it with something outside that comfort zone. For example, starting a series combining hip-hop artists and academic researchers for deeper analysis of content.