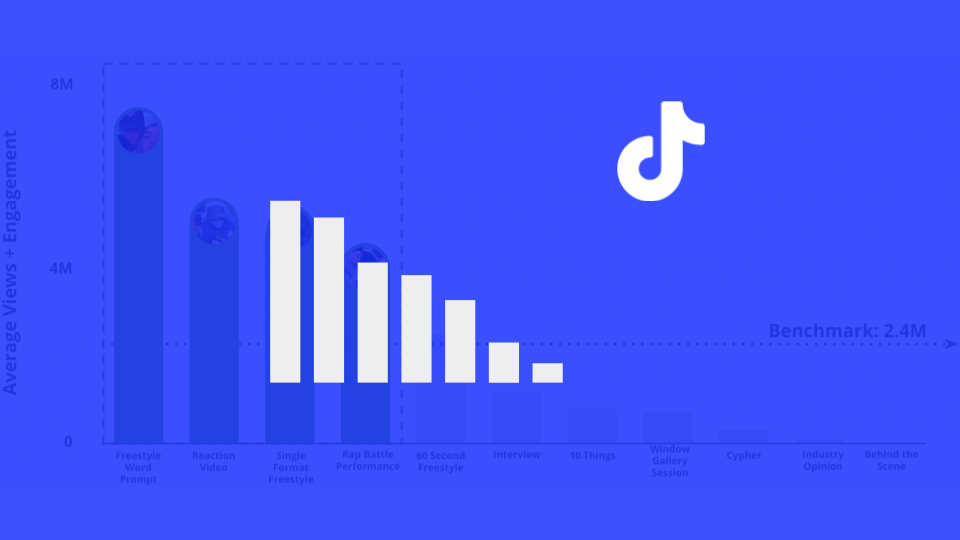 Good performing content opportunities for the Spain hip-hop audience on TikTok include:

Substandard performing content opportunities for the Spain hip-hop audience on TikTok include:

Low performing content opportunities for the Spain hip-hop audience on TikTok include:

Freestyle Word Prompts are often used as a segment in Rap Battles, however they are also popular on TikTok where everyday people experiment giving random words to their friends to freestyle with as they rap.

Reaction videos are popular in Spain amongst specific creators who listen, watch and review up and coming music and provide real time reactions and thoughts for viewers.

Single Format Freestyles feature videos that highlight one creator performing a freestyle on a radio show, through their iPhones or on a special performance format.

Content Opportunities: Currently there is a whitespace as most performance media outlets are not present on TikTok repurposing their content. Create a freestyle performance series that leverages the successful effects of reposted videos such as lyrics on screen or compilations of top freestyle moments.

Rap Battles are a live performance style where artists pair up against each other to compete with freestyles in a series of segments with different prompts in front of a crowd.

Tactics: This video features Rosalia who is popular internationally due to Travis Scott featuring her on a song in 2020.

Tactics: This artist shows a lot of emotion in her freestyle which leads to suspense as the seconds countdown.

Tactics: The guest, Nathy Peluso, asks the host where the camera is to look directly into it and send a message.

Tactics: Constant captions are used across this video to show a heated battle where competitors are moving around often as they rap.