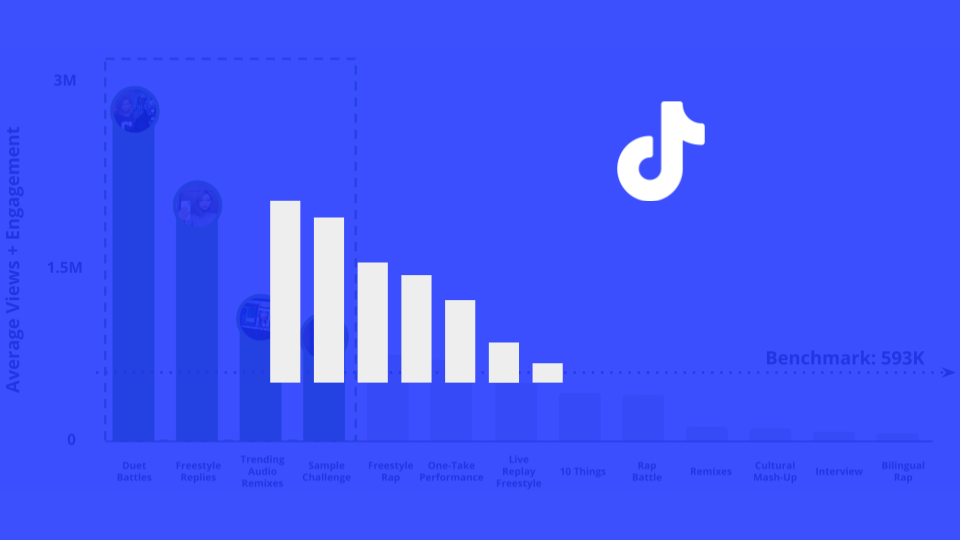 Good performing content opportunities for the Japanese hip-hop audience on TikTok include:

Substandard performing content opportunities for the Japanese hip-hop audience on TikTok include:

Low performing content opportunities for the Japanese hip-hop audience on TikTok include:

Rappers engage in rap battles using a specific song and respond back to each other's videos with a duet freestyle.

Music producer, Matt Cab, used an audio sample from this trending video and remixed it into a new sound. The original remix video generated 7x more views than what he typically generates on his TikToks.

Matt Cab, a music producer and creator on TikTok, samples unexpected sounds and shows the viewer the evolution of those sounds as he uses them to compose creative beats and tracks.

Viral Videos:These videos were omitted from their content buckets as ‘viral’ outliers for exceeding 3x the views and engagements of their respective benchmarks.

Tactics - In this video, Emapoch utilizes a TikTok filter and ads subtitles for accessibility.

Tactics - This video features a clip from UMEDA CYPHER (梅田サイファー)’s performance on The First Take. The video grabs the viewer's attention with a closeup of Creepy Nuts rapping extremely fast verses.

Tactics - Length: Both the viral Replay Live Freestyle videos range at about 3 minutes in length.

Content: After going on TikTok live and performing impromptu raps, bambi_94bow reposts the live videos on his feed. This feature of downloading live streams with the comments and likes is unique to TikTok.

Tactics - Low-fi works — all that’s needed to make a viral video is a smartphone. Emapoch pre-records her raps and uses them as audio for selfie-style videos of her lip syncing to the rap.

Tactics - Videos that contained actual snippets from GQ’s 10 Essentials videos outperformed those which just teased the full content. In the case of ANARCHY, the teaser video generated 124K views whereas the video above (which was posted two days later) generated 1.2M views.

Tactics: Length - Both the viral interview videos range at about 30 seconds in length.