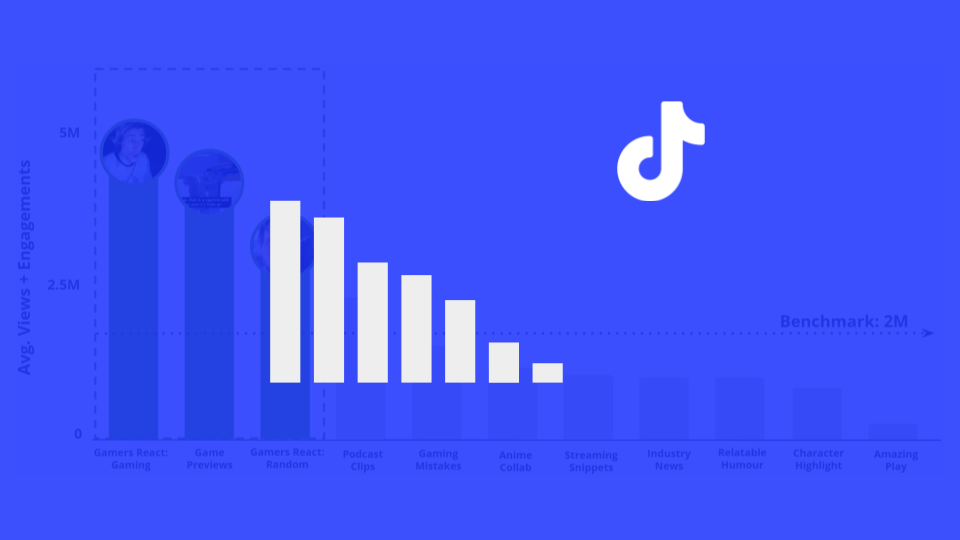 Top performing content opportunities in the Gaming space that had the highest average number of views & engagements on TikTok include:

Good performing content opportunities in the Gaming space on TikTok include:

Substandard performing content for the Gaming space on TikTok include:

Low performing content for the Gaming space on TikTok include:

Candid Reactions. Catching the real reactions of gamers playing a game or finding out an interesting fact about someone in the gaming industry.

@ludwig Why did no one tell me the minecrafters were built like that??? #ludwig #slimecicle #streamer ♬ original sound - Ludwig

Hyping it Up. New video game trailers are showcased and their game plays are described and explained to the viewer.

Double the Entertainment. Split-screen or stitch videos of gamers’ real-time reactions to popular videos on the internet or videos that they’re tagged in.

Gamers IRL. Footage of gamer’s podcast episodes where they give life advice to viewers or chat with the host about their life.

These videos were omitted from their content buckets as ‘viral’ outliers for exceeding 3x the views and engagements (V+E) of their respective benchmarks.

Tactics: Using the viewer’s comment to respond with a video that spotlights the quirks and charms of a character.

Tactics: Showcasing admiration for a game by sharing interesting interactions such as when the character ‘breaks the fourth wall’.

@ign Replying to @hzjoe in case you were wondering, yes that is the voice of Morty #highonlife #rickandmorty #gamescom2022 ♬ original sound - IGN

Tactics: Short clips highlighting the ingenious strategies  gamers use to beat their opponents and win the round.

Tactics: Videos asking a subjective question such as ‘who would win’ to highlight the qualities of video game characters and create a debate in the comment section.

Tactics: Asking celebrities gaming related questions such as what their favourite game is and sharing their real-time response.

@ign Niamh Walsh was a big World of Warcraft player and might get back into it! #netflix #thesandman #worldofwarcraft #gaming #pc #celebrity #wow ♬ original sound - IGN

Tactics: Showcasing unique or secret interactions with the game that would take a while to figure out.