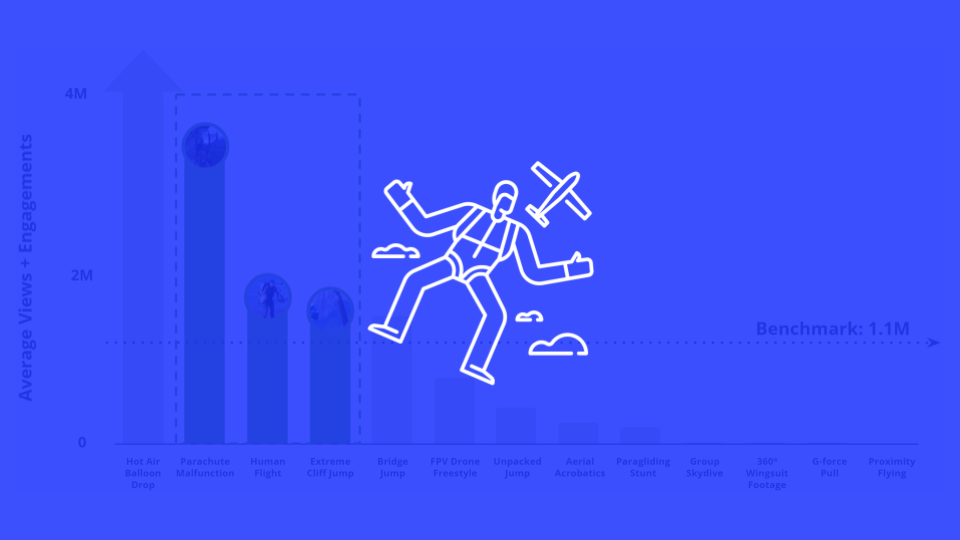 Top content opportunities in Q4 2022 for the Aerial Sport audience on TikTok include:

Excellent performing content opportunities for the Aerial Sport audience on TikTok include:

Good performing content for the Aerial Sport audience on TikTok include:

Substandard performing content for the Aerial Sport audience on TikTok include:

Low performing content for the Aerial Sport audience on TikTok include:

Freddy Chase, a skydiver, posts videos of himself standing or holding onto the edge of a hot air balloon and letting go or jumping off into free fall. In the first video below, before letting go, he thanks his fans for helping him reach 1M followers on TikTok. On the second video below, he is wearing a suit and pretending to take a call before jumping off the balloon.

Infinite Adventures posted videos of an incident where his canopy got stuck in a tree on a cliff, and he was hanging by just his harness. In the second video below, a jumper falls onto another jumper’s canopy at Bridge Day 2022. These videos strictly only show incidents when athletes were safe and unharmed.

Performed by Professionals. TikTok pls don’t take this down. Everyone was safe and okay😉 #basejump #professional #safety #fake

These videos showcase a jet suit or hoverboards in action. The videos were shared by the founders of the respective companies that made these products (Richard Browning of Gravity Industries and Franky Zapata from Zapata).

Videos show BASE jumpers leaping off extremely high cliffs. One includes a 360° view from Théo Audebaud as he jumps face-first off a cliff, and another shows footage taken by a bystander as a professional BASE jumper leaped off a cliff in Switzerland.

Professional BASE jumper in Switzerland🤘🏻🤙🏻

Content: POV footage from Johnni DiJulius’ jump from the top of a boom lift over a bridge at Bridge Day 2022 .

Content: Footage from a 360° action camera featuring a BASE jumper diving off the top of a cliff, followed by the person with the camera capturing their free fall from above.

Where did he go?😱

When in trouble…. Tuck for double….

Content: FPV drone pilot, ItsKenFPV, navigates his craft through an abandoned warehouse in this impressive video. Video uses a split screen so viewers can see the controls.

Content: In the first three videos below, Richard Browning founder of Gravity Industries, uses a jet suit/jetpack to fly over the ground. Both videos are accompanied with trending songs. In the fourth video below, Franky Zapata shared a video of someone taking off using the Flyboard Air.

Content: Infinite Adventures shared an alternative angle from his BASE Jump accident in which he got his canopy stuck in a tree.

Content: In the first video below, a tandem paragliding pair stands on top of another paraglider’s wing. The second and third videos below show a paraglider performing flips while descending through the air.

Content: Footage from Jeb Corliss’ 2011 flight, when he became the first person to fly through a mountain in a wingsuit.

I did this flight in 2011 and it was the first time a human flew through a mountain with a wingsuit. @gopro #gopro #fyp #foryou #wingsuit #basejumping #proximityflying

♬ Take My Breath Away - EZI

Content: Red Bull athlete Maja Kuczynska showcases her aerial acrobatics while free-falling. In this video, Maja performs a split leap in mid-air. In the third video below, Maja does the moonwalk mid-air by "popular demand."

Tactic: Moonwalking seems to be a popular request amongst followers. Check out this other example.

I used to have to do this on the ground when i was training gymnastics, and honestly its a lot easier in the sky 📸- @Mairis Laiva