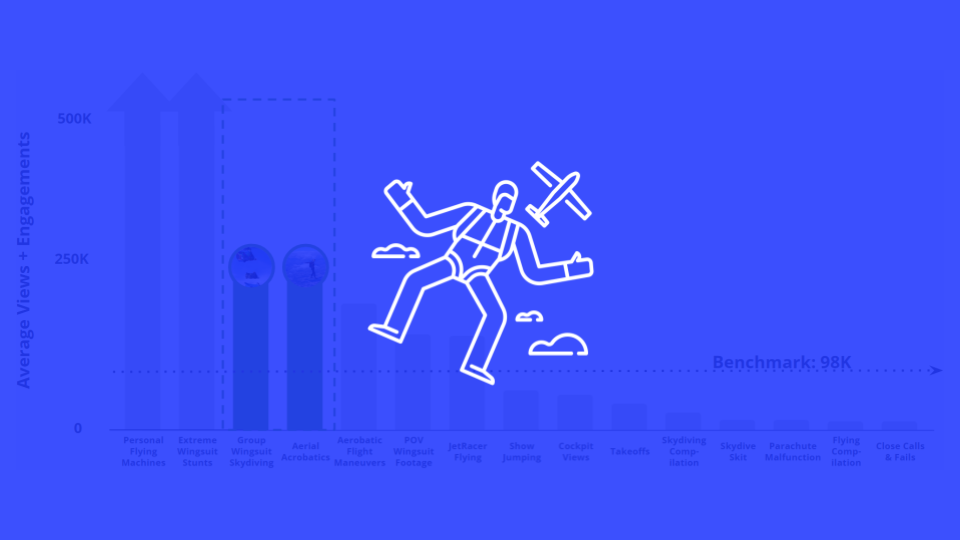 These videos showcase a jet suit or hoverboard in action. Top videos were shared by Gravity Industries and Franky Zapata. Personal Flying Machine videos were an excellent performing content opportunity on TikTok as well.

Content: In this video, a “heavy lifter” aircraft (C-5 Galaxy) performed a takeoff roll while empty. This video showcased the "Black Mamba" (A-10) departing at AirVenture.

Content: These two videos are reposts of the original video shared by Kevin Philipp where he successfully ripped off his tangled canopy and deployed his backup parachute with just one second before he would have hit the ground.

Content: RAF Red Arrow shared footage of the cockpit of one of its planes while they performed a “crowd-favourite Tornado manoeuvre”.

Content: Alex Aimard and Carlos Briceño BASE jump off a cliff wearing wingsuits and fly along the mountainside, capturing the flight with a 360° action camera.

Content: The first four videos above feature a pilot flying with a Gravity Industries jet suit. In this video, the pilot uses an Insta360 camera to give viewers an exciting 360-degree view of his flight over the water. The last two videos feature pilots flying Zapata’s Flyboard Air. This video is from the Spa Grand Prix, where someone races an F1 car with a Flyboard Air.

Content: This video shows a pilot’s reaction as he pulls at 9Gs. In this video, The Flying Bulls shares footage of a pilot flying an N25Y while performing various maneuvers.