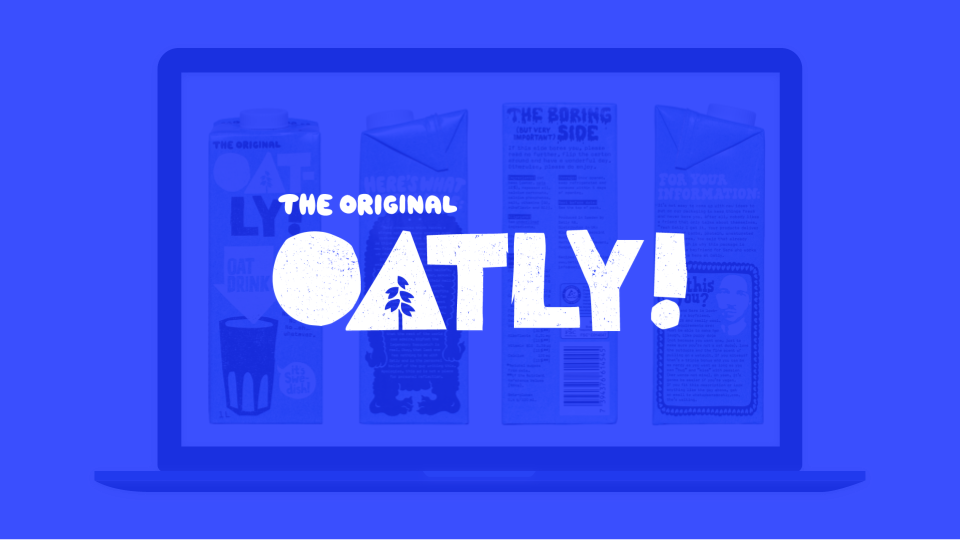 How Oatly Pursues Its Sustainability-Driven Mission

Oatly, a Swedish oat milk brand launched in the 1990s, was a minor national brand playing on the outskirts of the vegan food industry. In 2014, two years after a new CEO Tony Petersson took the lead (2012), the brand has undergone a complete makeover and embarked on an ambitious sustainability-driven activism path. Since 2014 Oatly has grown into a global challenger brand with a considerable impact on European environmental policies and a supporter of grassroots sustainability initiatives.

Packaging is the medium: Brand packaging was the first touchpoint that manifested the brand’s new positioning in 2014. Each side of Oatly’s packaging carries a message to the consumer. When Oatly first put a new pack on the shelves it carried brand promise and hinted at the wastefulness and negative impact of the dairy industry. Another pack update featured Oatly’s slogans “It’s like milk but made for humans” and “Wow no cow”. In 2019 Oatly added the climate footprint each milk cartoon produces to the front of the pack. The latter update was supported by an activist marketing campaign known as “Food Industry — Show Us Your Numbers”. The campaign called other players to add their environmental footprint to their packaging. Despite the common belief that packaging updates negatively impact consumers’ taste perception, Oatly’s customers seem to love to explore the brand’s packaging and share their excitement on social media.

Brand Activism: Oatly’s sustainability agenda extends beyond its immediate operations. The brand believes it can make a much larger impact by engaging in the environmental discourse on a policy-making level. Over the last two years Oatly initiated two petitions challenging European laws:

Supporting Individual Contributors: Oatly recognizes that environmental change requires action on different levels. The brand encourages and inspires individual activists and teams to make a meaningful change in their communities and circle of influence. To support the grassroots movement Oatly launched a Je Ne Sais Quoi of the Month Fund which rewards individuals contributors with a $1K financial prize. Even more importantly, Oatly introduces them to its 530K social media community and features them on its website that gets ~300K monthly visits. Such exposure is often able to boost small business awareness, inspire and reward the founders.

Oatly is a challenger oat milk brand founded in Sweden. In fact, the brand pioneered the product back in the 1990s. However, it wasn’t since the beginning of its history that Oatly enjoyed the success it does these days.

2014 was a pivotal year for the brand and they have been aggressively growing ever since. The Oatly brand has undergone a complete makeover — a new look and uncompromising messaging.

The brand relied on its packaging to communicate new positioning. Oatly still considers its pack being the main touchpoint and a medium to manifest its views and values.

Oatly’s brand update was supported by a daring video campaign that hit the nerve of Sweden’s biggest milk producer, Arla. The dairy corporation replied with a combination of a lawsuit and advertising to attack back.

This kicked off the start of what’s called a Swedish milk war and further defined Oatly’s active sustainability agenda on the policy-making level.

In addition to the top to bottom advocacy approach, Oatly launched a support fund that grants $1K to individual environmental activists. On a bigger scale, the company works with US organizations to encourage farmers to crop oats.

1. Packaging Is The Medium

‍Oatly considers its packaging being the most valuable and accessible touchpoint. Oatly leverages its package to communicate both founding company values and current campaign messaging and invites customers to interact with every side. ‍

In 2014 Oatly completely revamped its brand starting with the new packaging. The company enlarged an updated logo and swapped bright colors with textured soft-hued tones to communicate the natural origins of the drink.

The new packaging manifested Oatly’s promise to its customers and hinted at the wastefulness and environmental impact of dairy production.

Many brands in the food industry are more conservative with packaging updates knowing the implications they have on consumers’ taste perception. Oatly, on the other hand, continues to frequently update its packaging to challenge the industry and entertain its customers.

One of the recent packs that appeared on the shelves in 2019 featured a climate footprint of every Oatly’s package. The brand wrote an elaborate update on its website explaining the rationale behind the move and illustrating how the calculations were made.

By adding a climate footprint to the front of its pack, Oatly competitively positions itself (as well as the rest of the non-dairy milk industry) against the environmental-heavy dairy production.

Oatly can be described as an “activist brand”. The company tirelessly keeps its stand against the dairy lobby and initiates various petitions to drive the government’s attention to its cause. Oatly’s environmental activism doesn’t go unnoticed and the brand often makes press headlines.

Shortly after Oatly added their own greenhouse emissions to the front of the pack, the company launched a comprehensive campaign encouraging other food industry players to show their CO2 numbers.

The ad campaign sparked a petition for a law requiring climate footprint information to be printed on food labels in Germany. Oatly activated multiple mediums to bring awareness to the campaign and get 50,000 votes which would guarantee that the German Government will discuss the case.

Oatly’s efforts inspired 57K people to sign the petition and in September 2019 the company’s General Manager Tobias Goj presented the case for a debate in the German Bundestag.

The brand created an interactive webpage about the CO2 labelling petition campaign, featuring the case study video and providing additional educational and entertaining materials for users to engage with.

Oatly covered its petition campaign in its 2019 Sustainability Report under the title “Upgraded society”. The company preempted the chapter with the following words: “...it’s our daily mission to spread the importance of sustainable food systems to anyone who might be interested and, more importantly, to those who may not be”.

In 2019 Oatly compiled its annual activities into a Sustainability Report that the company shared on its website. The document outlines the brand’s stance on the current climate situation, shows overall corporate climate footprint and goes in-depth into Oatly’s supply chain. Since the report was put up on its own sustainability.oatly.com domain in November 2020, it was visited 54K times.

Some conservative politicians had somewhat of a skeptical view on the petition and the Bundestag didn’t pass the mandatory CO2 labelling law. Regardless of the outcome Oatly inspired other brands to follow the example and gained appreciation from its community.

In 2021 Oatly initiated another petition and awareness campaign.

In October 2020, European Commission voted in favour of the Amendment 171 which bans dairy-related descriptions for plant-based foods. Climate activists and vegan brands deem the amendment as anti-climate and potentially threatening consumers’ right to information and companies’ right to fair competition.

Oatly started with raising awareness about the amendment relying both on its owned and paid channels. The brand reworked the landing page of its European websites to mimic the familiar captcha module that differentiates robots from humans, asking people to differentiate real milk from an oat drink.

Oatly also launched an informational webpage explaining the changes the amendment will force vegan brands to implement and directed visitors to the petition page.

To support the petition, Oatly created four videos that were distributed via YouTube, Instagram and Facebook. The ads pictured a focus-group-like setting where customers were asked to differentiate milk from oat milk.

Oatly receives remarkable Instagram community support every time it posts about the Amendment 171 — either it being an explainer post or a progress update.

All of Oatly’s efforts were focused on driving people to the website where they could sign the petition. As of May 26, 2021, the petition had 456,776 signatures out of 500,000 needed for the EU to review its decision. Oatly is directly responsible for 10% of traffic to the petition website, excluding all associated indirect visits (from social media, word-of-mouth, out-of-home campaign).

The case of Amendment 171 was closely followed by the European media and Oatly’s brand activism didn’t go unnoticed.

On May 25, 2021, after almost 4 months of active campaigning, the European Parliament rejected the Amendment.

Over the last year, Oatly was mentioned in 2,555 articles in different languages.

Oatly recognizes that environmental change requires action on different levels. The brand encourages and inspires individual activists and teams to make a meaningful change in their communities and circle of influence.

In April 2020, Oatly launched a “Je ne sais quoi” initiative that supports individuals doing amazing things. Each month Oatly chooses an individual or a group from those who applied via a website form and grants them 1,000 dollars.

In addition to the monetary prize, the winner is introduced to Oatly’s 520K social community and featured on the brand’s website with 300K monthly visits, which is an enormous awareness boost for individual activists and their small initiatives.

For Purpose Jobs saw a +31% MoM traffic increase in February 2021, when the company won the prize and was featured on Oatly’s digital channels. For the month of February, oatly.com was the second top traffic source responsible for 20% of referral visits.