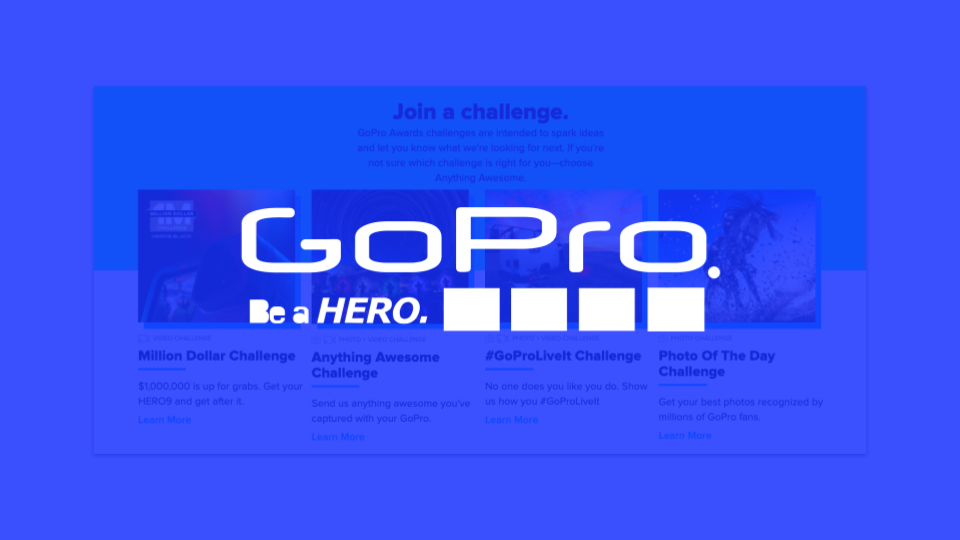 How GoPro Powers Their YouTube Channel With Incentivized UGC

Tactic — Awards Program For UGC: GoPro is leveraging their community to create content for their social channels through their GoPro Awards program. This allows GoPro to create a self-fulfilling system that provides a lot of high quality content as well as promotes their products. ‍

Tactic  — Time Giveaways with Product Launches: GoPro coincides the launch of their newest camera every year with their biggest challenge: the GoPro Million Dollar Challenge which generated 42K submittals in 2019. The strategy is threefold.

First, this challenge promotes the purchase of GoPro’s new camera as all footage submitted must be filmed on their latest release. This also helps showcase the camera’s new features (clearer video, bigger screen, camera stabilization, etc.) in an organic way.

Second, GoPro is able to compile a massive database of content that can then be repurposed for other uses on their social channels throughout the year.

Last, the allure of the “million dollars” creates a large incentive for customers to join the challenge which increases the size of GoPro’s community of creators.

GoPro generates UGC through their GoPro awards program which generated 130K website visits in 2019. This program involves several content challenges which reward contestants with gear, exposure, and cash—giving out $1M a year to top content creators in total awards.

GoPro awards are ongoing challenges that tap into to their community and supplies a steady stream of quality content.

GoPro uses content submitted to promote the awards on their social channels creating a positive feedback loop of UGC promoting the creation of more UGC.

The largest cash incentive challenge is the GoPro Million Dollar Challenge which co-launches alongside GoPro’s latest camera launch every year and is meant to encourage both the purchase of the newest GoPro and the creation of quality content.

Contestants have three months to film & submit content that conforms to the contest guidelines such as raw clips only, no music, and 100% GoPro HERO9 Black footage.

At the end of the Million Dollar Challenge, GoPro creates a highlight reel featuring all of the winning videos. The last challenge GoPro had 42K clips submitted and 45 creators split the million dollar prize.

Looking at the YTD average YouTube post cadence, GoPro posts 4x more often a month than the competitive set. This is largely due to their UGC strategy which allows GoPro to post more frequently.