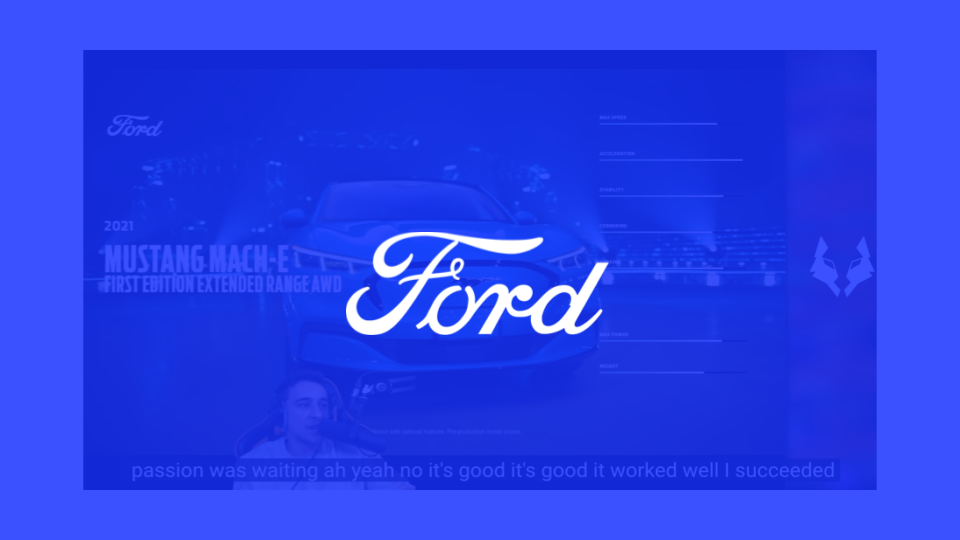 Platform Choice — Ford Mustang Tapped into Twitch to Engage the Millennial and Gen-Z Audience: The Twitch platform has seen explosive growth in 2020 — concurrent viewers grew by +68% while the number of monthly streamers almost doubled (+89%). Many brands tapped into the platform to reach a remarkably young audience — 73% of Twitch users are under 34 years old. Ford’s offering was a drive stream, where the users could help navigate a real Ford Mustang Mach-E on the interactive track by commenting in the Twitch stream chat.

Promotion — The Brand Leveraged its Owned Channels, Twitch Gamers’ Platforms And the Press to Promote the Stream: Ford Mustang started promoting the Twitch Drive Stream about three days before the live event. The brand engaged the press to spread the news and posted on its own social media accounts. Twitch gamers invited their followers to join the stream by announcing the event on their Twitter accounts. The drive stream took place on the steamers' own Twitch accounts as well as a Ford Mustang’s dedicated Twitch page.

Event — Streamers Encouraged Its Viewers to Participate in the Stream Chat and Help Navigate the Car: Each drive stream started with a short promo video of a Ford Mustang Mach-E which gave streamers a chance to call out specific car features. After a car overview, streamers were introduced to the drive stream rules:

Streamers with excitement encouraged viewers to participate in the chat and cheered as the car made the correct turns. After the event, the streamers expressed their thanks to Ford for giving them an opportunity to virtually drive the car. Ford created a YouTube advertisement featuring highlights from the Drive Stream event backed up by a $22K budget.

At the end of 2020, Ford ramped up its efforts to promote the 2021 all-electric Ford Mustang Mach–E. The brand invested $118K to run YouTube videos promoting the new vehicle. In addition to this, Mustang organized a Twitch-exclusive campaign to introduce the Ford Mustang Mach–E to a young millennial and gen Z audience. The brand built a real 100,000 sq. foot interactive track and collaborated with top Twitch gamers to organize a drive stream.

Twitch has seen explosive growth in 2020: concurrent viewers grew by +68% while the number of monthly streamers almost doubled (+89%). Many other brands such as Lexus recently tapped into Twitch to engage the platform’s millennial and gen-z audience.

‍
On Dec. 15, 2020, Mustang announced the upcoming stream on its social channels, followed by reminders and last call posts during the next three days.

Prior to the stream, the gamers posted on their social channels to announce the day and time of the stream drive. On the day of the event, the gamers published another post reminding their followers of the Twitch event.

Ford engaged the press to spread the news about the Twitch Drive Stream event and several automotive journals published a press release.

The Twitch Drive Stream took place on December 18, 2020, in an interactive track Ford Mustang build specifically for this activation in Pony Park in Toronto, Canada. Twitch streamers and their followers were virtually navigating the car from their home. The gamers were taking turns to stream the ride. The streamers encouraged their audience to participate in comments to determine which turn the car should take, slow down or accelerate.

How did it work:

Each Twitch stream begins with a 25-second car overview allowing a gamer to call attention to some Mustang Mach-E features. Car overview is followed by the on-screen stream drive rules:

At the end of the video, some gamers chose to go in-depth about car features.

After the stream, Ford Mustang created a post-event YouTube advertisement featuring the process from how the track was built to streamers navigating the car along with Twitch viewers.

After the stream, some gamers uploaded Ford Mustang drive stream videos on their YouTube channels, where they got up to 37K views. Others expressed their thanks for the opportunity to participate in the campaign via Twitter posts.

Proud to have been partnered with @FordCanada to test drive their new Mustang Mach-E through Twitch chat!

Big thank you to @FordCanada for giving me the opportunity to participate in the Mustang Mach-E Drive Stream event! It was a wild ride and I feel lucky to have been invited❤️ #ad #MustangMachE #FordDriveStream @FordCanada