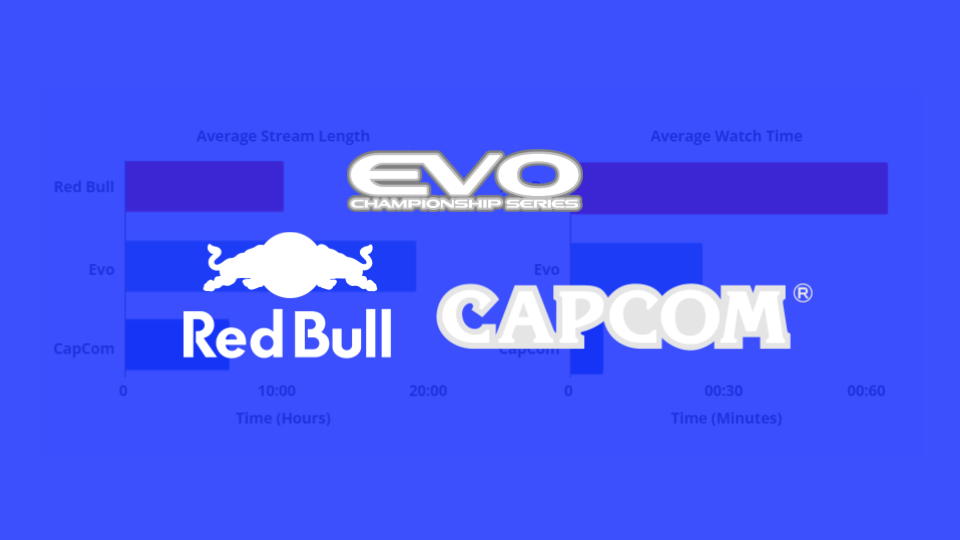 The following fighting game competitions were included in the competitive set for this analysis:

About the Stream Audience

This report consists of three main elements for the competitive set:

The United States accounted for 36% of audience streaming locations in the competitive set, followed by Canada (9%), the United Kingdom (8%) and Germany (4%).

Red Bull has the highest audience of male viewers at 75%. The age group with the largest amount of female audience members are 18-24 year olds at 10%.

Evo has the highest share of female audience members in the competitive set at 30%. Men are the majority audience (70%) but women surpass men in the 13-17 group (+16%).

The following competition dates and Twitch streams were included in this analysis:

On average across the competitive set, viewership trended upwards later into the day. Streaming times with the most concurrent viewers include 16:00, 17:00 and 21:00 hours.

The highest overall peak in Evo’s first day of competition streams was generated by two announcers talking about the progress of a particular player (Mr. Peck) overtime from the Losers Finals to the Grand Final Reset in Skullgirls.

On Day 1 of Evo’s competition, Street Fighter V maintained the highest average concurrent viewers at 13K throughout the stream. Viewer build up peaked at the height of competitions and fell during break times. Audience attention was held at the end of the game by going through “Blast from the Past” performances.

Skullgirls: 2nd Encore maintained the least amount of volatility in valleys by playing games with audience members during breaks where viewers could guess who makes the winning blow. The highest peak was a transition into the next game at the end of the stream for Skullgirls which featured a “Women of the FGC” interview and conversation.

The highest overall peak in Red Bull’s Day 1 stream was at 15:00 during Guilty Gear gameplay (Pool A - Match 5 - Apologyman vs BNBBN) which peaked at 30K viewers.

Red Bull’s Day 1 stream of Guilty Gear experienced positive spikes in viewership when the first match and the finals began. However, the stream’s viewership dropped when the semi-finals gameplay ended. Viewership also fell significantly when the stream took a 30-minute break before Tekken 7 started.

The average viewership for Tekken 7 was generally consistent, except for a -15% decrease in viewership during the final ten minutes.

On the second day of Red Bull’s competition, the only game played was Street Fighter V. The Grand Final (11K) and Top 8 (11K) sections had the highest average viewers.

During Red Bull’s second day, viewers peaked during the last ten minutes of the tournament to see ProblemX defeat NL in the finals. The greatest drop (-41%) in viewership occurred during the Group Stage — Pool C Match 1 (Brain_F vs GO1).

During the second day’s Top 8 and Grand Final sections, viewership peaked in the quarter-final FT 3: ProblemX vs Punk with 12K viewers, and then again during the grand finals while ProblemX defeated NL.

The CapCom Pro Tour Season Final in February 2022 took place over three days and featured Street Fighter V matches by country. During Day 1, the event had an average of 24K concurrent viewers and peaked at 38K concurrent viewers during the Australian game.

On Day 1 of CapCom’s competition, the Australia match generated the highest levels of views. Viewership dropped off when the coverage of Australia matches ended, however CapCom maintains viewers during the breaks with game commentary from their “Analyst Panel”.

In the latter half of the stream on Day 1, the viewership numbers fell; however, when the E Eur/Russia* (+1%) and S America West* (+3%) matches were shown, viewership slightly increased. Asia SE round did not experience any change in viewership.

Average viewership steadily increased during Day 2 of CapCom until C America East matches concluded. A +37% increase in viewership occurred during the competition introduction when the stream host got viewers excited about the tournament by playing up the high-stakes emotions of the game.

Like Day 1, the latter half of CapCom’s stream on Day 2 experienced a steady decline in average viewers. During the Brazil match at 18:10, viewership dropped by -20%. CapCom increases event viewership by using a 3-minute countdown before the next event.

Day 3 of CapCom had the greatest average concurrent viewers out all of the days in the competitive set at 39K. Viewership peaks at 57K after the Japanese matches ended, and the event commentators discussed the final game.

On Day 3 of CapCom, viewership increased by +81% at 16:10 during the Nordic / Baltic match. Viewers levelled out over the N America MidWest match at 41K and peaked following the France/Spain/Portugal match at 51K while the commentators analyzed the game.

Day 3 of CapCom varied from the previous two days as the second half of the stream had a greater average concurrent viewer than the first half. CapCom experienced a substantial decrease in viewers after the N America West match, which decreased by -21%. Viewers peaked near the end of the stream after concluding the Japanese game.