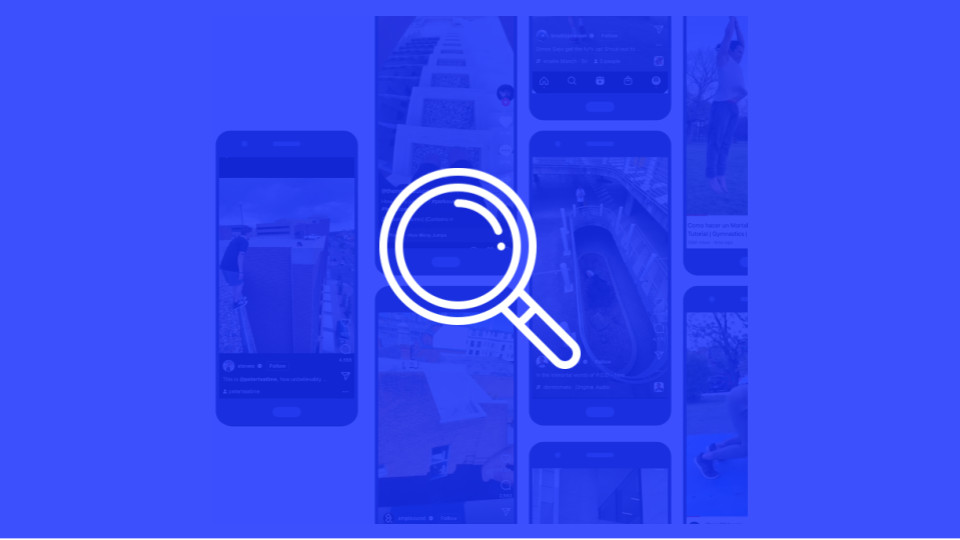 In this analysis, we identified common themes and tactics present in the Top 31 Viral* Freerunning videos.

Six of the 31 viral videos identified featured point-of-view footage of practitioners practicing parkour from extreme heights. Videos grab viewers' attention by showing the view from an extremely high vantage point in the first frame or in the video’s thumbnail. Videos use trending music to add excitement to the daring footage.

Videos featuring parkour races such as the World Parkour Championships performed exceptionally well in Q1 2022. Viral videos captured the race from start to finish and featured tight races with exceptionally close finishes. The videos use high energy, upbeat songs to capture the viewer's attention and compliment the excitement of the race.

These videos did not use any music or special audio effects. Instead, the video audio features the enthusiastic reactions of videographers/crew members as they celebrate or cheer on the practitioner for landing an epic stunt or trick.

A compilation of individual clips featuring various tricks, stunts, and jumps from unique urban locations performed exceptionally well in Q1 2022 on Facebook and IGTV. The top videos were slightly longer, being 1:30 and 3:10 minutes.

Videos feature music that has been perfectly synchronized with the athletes' tricks to help capture the viewer's attention and elicit an excited emotional reaction to these adrenaline provoking stunts.

Videos feature a group of traucers individually attempting to do a particular jump or stunt in urban settings or over bodies of water.

According to Vox, most of the videos on Facebook's top 20 charts for Q4 2021 were posted by anonymous users or from accounts that primarily aggregated other people's content. In addition, many of the top videos are recycled videos off TikTok. Some of top Freerun videos on Facebook were shared by accounts whose primary purpose was sharing other people's content, such as House of Bounce and SPORTbible Australia.Additionally, some of the top Freerunning videos on Facebook had been reposted multiple times by their creators, generating significant views for each reposting.

*Repost Views includes the total amount of views from original video post plus the additional views from reposts.

Viral YouTube videos often include keywords in their titles to help increase the video’s likelihood of being discovered through search on the site. Alex Destreza uses vertical line bars to split up keywords in the title, such as “Frontflip Tutorial | Parkour | Tricking | Acrobatics | Gymnastics | Capoeira | Flips | Alex Destreza”. Tobypk uses capital letters, and brackets in his video titles, such as “PARKOUR POV - ROOFTOP JUMP P.30 (Epic Parkour POV Chase) || Tobypk”.

Fail videos have been popular since the dawn of social media, and freerunning is no exception! The two videos shown on the left are examples of viral fail freerun videos shared by Charles Poujade and Dominic Di Tommaso. Videos were quick, just 3 and 7 seconds long.