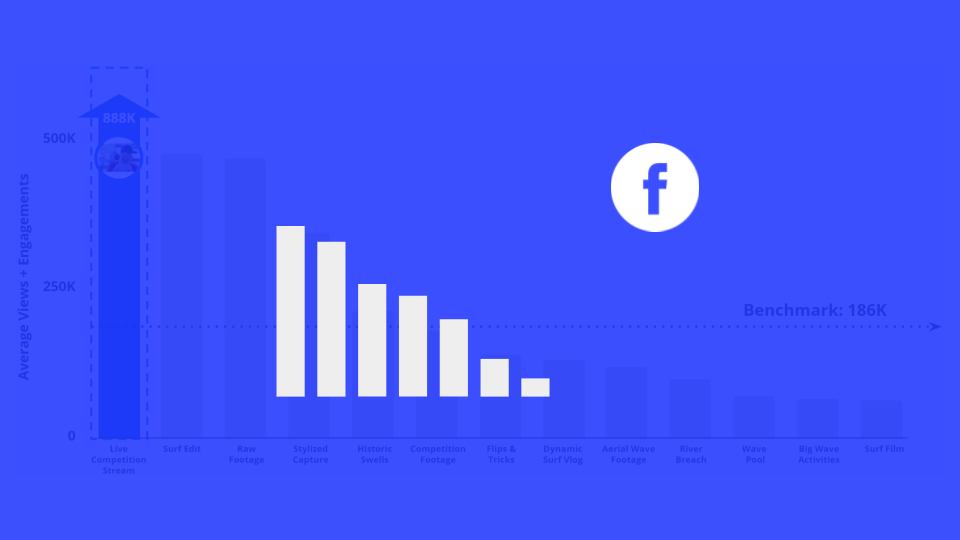 These videos are hosted by WSL to share every moment from international surf competitions with fans at home.

These feature beautiful surf visuals that link to longer YouTube videos with a series of surfing clips throughout the day.

These videos feature in-the-moment captures of surfers on the water; their only purpose is to follow a surfer on the waves.

Similar to Raw Footage, these videos are intentional and feature unique angles through drones or effects, like slow motion.

While these videos may not have been top performing - they have great concepts that could be executed and experimented with.

* Views shown on Facebook represent total for the cross-posted video. These views are how much the video produced itself.

Outliers: These videos were omitted from their content buckets as ‘viral’ outliers for exceeding 3x the views and engagements of their respective benchmarks.

Tactics: This is a 14 second video featuring Kai Lenny on Maui’s South Shore surfing one of their biggest swells in history.

Tactics: This video is just over 5 hours in length (-37% less than the average stream length). It features a full competition with commentators reporting from the water.

Tactics: This video is 33 seconds in length and features two longboard surfers as they share a wave.

Tactics: This video is three minutes in length and features the full construction of a river breach from a river to the ocean as well as the creators surfing in it.